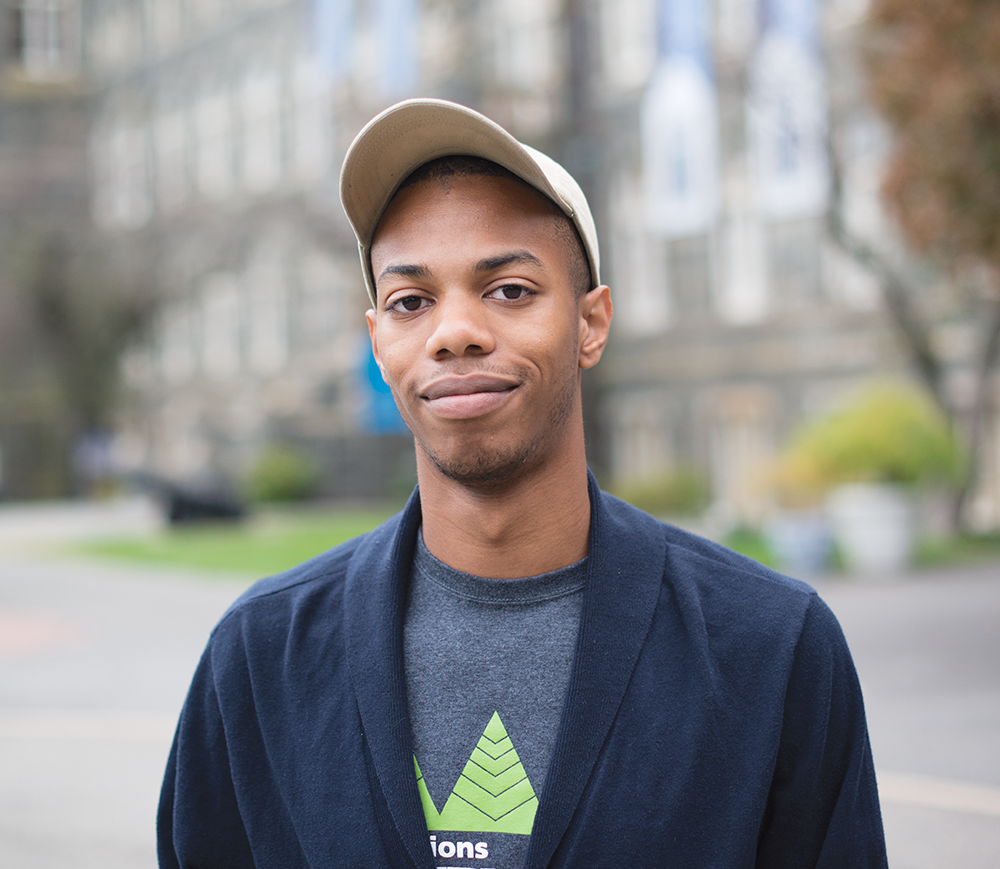 In the days following the 2012 shooting of Trayvon Martin, LaDarius Torrey (COL ’17) was told by his father, “Honestly, in America, you don’t have to do much besides being a black man to be accused of some horrendous crime, or actually be shot and then portrayed as a criminal.”

It scared him then and scared him again when he heard those words uttered this summer. Walter Kelly (COL ’16) also remembers the day he found out what had happened to Michael Brown.

“I was speechless,” he said.

In the midst of the chaos surrounding St. Louis, Time Magazine released a video titled “Am I Next?” that depicted the transgressions in Ferguson from the perspective of a black teenager partaking in the protests. Shortly before the clip made its debut, Torrey happened to ask himself the same question late one night: “Am I next?”

The events in Ferguson, Mo., hit the mainstream media toward the end of the summer, but according to Kelly, back on Georgetown’s campus, “No one was saying anything about it.”

The two students thus began working on their own video project which was released several weeks after the University’s first response to the events, a panel of scholars reflecting on Ferguson on Aug. 28.

Released on YouTube on Sep. 22, their video that is also entitled “Am I Next?” depicts a group of young men on the steps of Healy Hall standing behind Kelly as he delivers his spoken word poem. There are shots from around the Georgetown campus and surrounding neighborhood with individuals holding up signs that protest common misconceptions of young black males.

Torrey had known of Kelly’s experience with spoken word performances and reached out to him in hopes that his idea to bring the Ferguson event to light could come to fruition with the help of Kelly’s poetry, and that together, the two students would spark conversation within the local community. After all, Cooper’s intention was to get people talking.”

The two felt that despite the mass amounts of media coverage, the voices of young black men in America were not being heard, and it was their responsibility to, as Kelly put it, “activate” those voices.

“The victims aren’t the ones telling their stories,” he said.

The pair needed a forum, a community of sorts, to allow their message to be conveyed; it was decided that their message was to be delivered in the form of spoken word.

“My living room became our drawing board, and everyone came over, and we were just started spitballing ideas,” Kelly said.

Torrey noted the importance of having Kelly use his spoken word talent to get across the message of the video.

“Even though I had the idea, I just knew that I could not express it the way that I felt that it should be expressed, which is why I reached out to Walter originally,” Torrey said.

Yet this project was not like most things Walter had done in the past — there was no live audience, no crowd to elicit a reaction from.

“I had to hone in on my performance skills,” he said, as a consequence.

Both were surprised by the number of students who came out in spite of the Saturday morning filming time. Kelly said that this was when they realized “that this message meant something to everyone else.”

The actual process of planning, shooting and editing the film went much more smoothly than they expected, driven by their passion and inspiration from the group of young men around them.

However, when asked about the film’s positive response on YouTube and on social media, Torrey measured its success in the conversations it sparked in the audience instead of popular reviews.

“The idea as a whole was to actually get people thinking,” Torrey said. “So, I don’t get joy out of, I don’t get excitement out of, you know, people telling me the video was powerful. I’d rather people actually have meaningful impact. Just to get people to think, because a lot of these micro-agressions that are discussed in the video though the statements, they don’t happen intentionally. …It is just something that people do, so if I can get people to think about their intentions and think about their actions before they do it, that’s the goal of the piece as a whole.”

As a result, Torrey feels that progress will be achieved when the film reaches and resonates with a wider audience.

To him, progress can be measured by those who are currently ignorant of the crisis at hand.

“Once we reach those people, I think progress will definitely be made,” he added.

One of the duo’s largest concerns was whether or not the events in Ferguson would actually cultivate progress in the right direction. In particular, Torrey felt that President Barack Obama’s unveiling of his My Brother’s Keeper initiative in 2013 was steering the response to the movement in the wrong direction, and that blame was being put on the individual and not on the system, which he believed was the true perpetuator of the problem.

“If we have to change ourselves rather than the structure which is where the issues originate, we are missing the bigger picture,” he said.

A Georgetown-organized trip to Ferguson has been scheduled for Friday, Oct. 10, and both Torrey and Kelly highlighted the importance of individual action, including being parts of events such as this.

“There is power in numbers, and when I say that, I mean that there is a community at Georgetown that will support you,” Torrey said.

Both Torrey and Kelly know they couldn’t have put together such a piece without each other, and they were quick to emphasize the importance of support. There will be individuals who share similar frustrations, and both feel that it is up to the individual to seek out these people because success follows those who seek change.