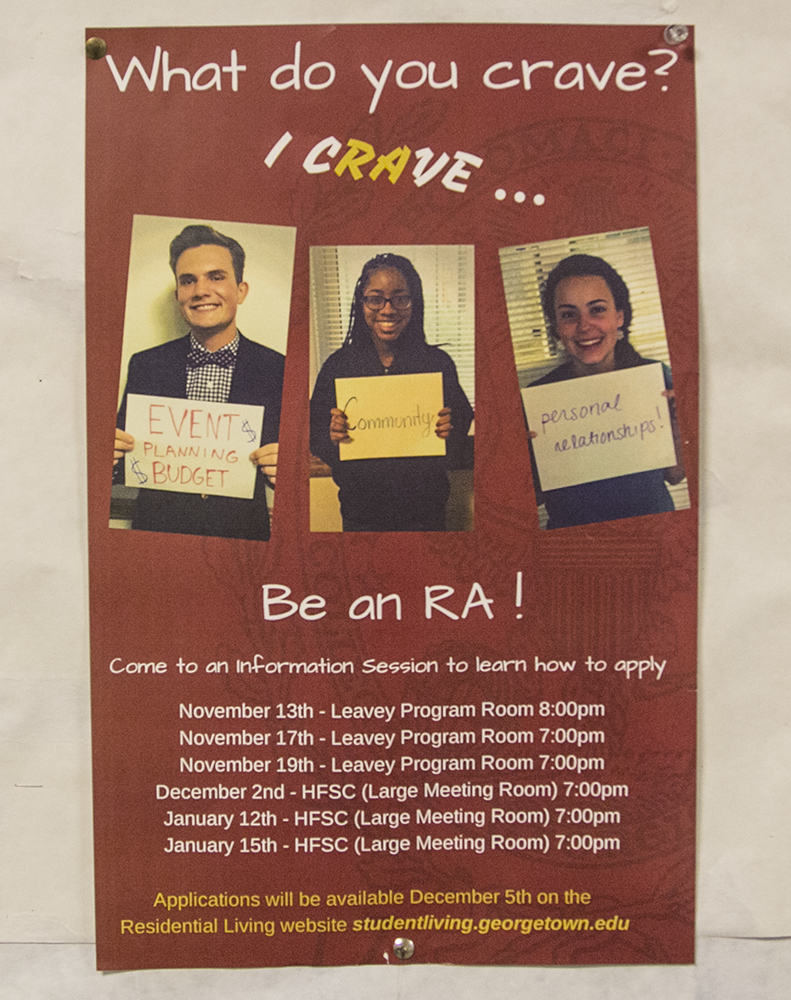 Following widespread student concerns about the treatment of resident assistants and enforcement of the confidentiality policies all RAs must sign governing their interactions with residents, the university has yet to offer clarification or propose changes, prompting the Georgetown University Student Association to unanimously pass a bill Sunday calling for the administration to investigate all claims of RA mistreatment.

A viewpoint by RA Thomas Lloyd (SFS ’15) published in The Hoya last week that detailed the university’s failure to provide him with support following his involvement with former student Daniel Milzman’s ricin case last year — by limiting the options for counseling available to him as an RA subject to confidentiality policy, among other actions — prompted other RAs to share their concerns regarding haphazard approaches to classifying RAs as university employees and limits on RAs’ ability to seek counseling and report instances of sexual assault involving residents.

Vice President for Student Affairs Todd Olson did not provide details on the confidentiality agreement that all RAs sign.

He said, however, that the university is committed to fostering open dialogue with RAs and to looking into these issues, and that Lloyd will not be fired for sharing his experiences, as some RAs had speculated. He did not specify whether or not Lloyd’s piece was a breach of confidentiality or why, as compared to past enforcement of the RA confidentiality policy.

“We work to make responsible judgments and we certainly are looking at and asking ourselves are there ways to provide more clarity to RAs as we go forward,” Olson said in a conference call with Georgetown University Director of Media Relations Rachel Pugh.

Olson, Assistant Dean of Residential Life Stephanie Lynch, and Residential Education Director Ed Gilhool sent out a joint email Friday evening to all RAs describing the appropriate support options for RAs. Olson said that this email served as a message to convey that the university is willing to listen to the RAs and to remind them of the university’s pre-existing policies, not to introduce new policy revisions.

“I would actually say that this message was more of re-emphasizing the commitments that were there, and acknowledging that for some students there were certainly concerns that have been raised, but I characterize it more as a good reminder and an emphasis than a brand new set of policies or approaches,” Olson said.

In an interview, Lloyd stressed the need for a clearer definition of the RA confidentiality policy.

“Ambiguities in the roles of RAs on campus allow for potential exploitation of that role, if something were to happen in a confidential situation,” Lloyd said.

“We want to be clear that reporting that you or someone you know has been involved in an incident involving sexual misconduct does not have any effect on your role as an RA,” Kilkenny and Lord wrote in the email.

Olson declined to comment on any details about this distinction, but said the university is working to more clearly define what he described as a “gray area.”

“I would say there are some situations that are very clear. When an RA is on-duty in their buildings and they’re interacting as part of their duty rotations, that’s pretty clear. There are some other situation where RAs are on campus that’s not as clear, and that’s what we’re working through, is those, maybe more gray areas,” Olson said.

The GUSA bill urges the administration to address these issues.

“If you’re an RA and you’re wondering right now… ‘Am I going to sign a contract, what are my rights, what am I guaranteed? Will I have legal protection? What if I’m assaulted?’ Things need to be spelled out,” GUSA senate Speaker Tyler Bridge (COL ’17) said. “Students at Georgetown should not have to have a law degree to become an RA and not know exactly what they’re getting when they sign that form.”

Chairperson of the GUSA Intellectual Life Committee Elizabeth Oh (SFS ’16) led the drafting of the bill, which GUSA President Trevor Tezel (SFS ’15) signed Monday night, and said that she hopes it will force the administration to make substantive changes to its policies.

“The senate passed this bill to hold the administration accountable for investigating the mishandling of some of the past cases, and also encourage them to continuously and cooperatively work with RAs so that they are safe and supported throughout their employment,” Oh wrote in an email.