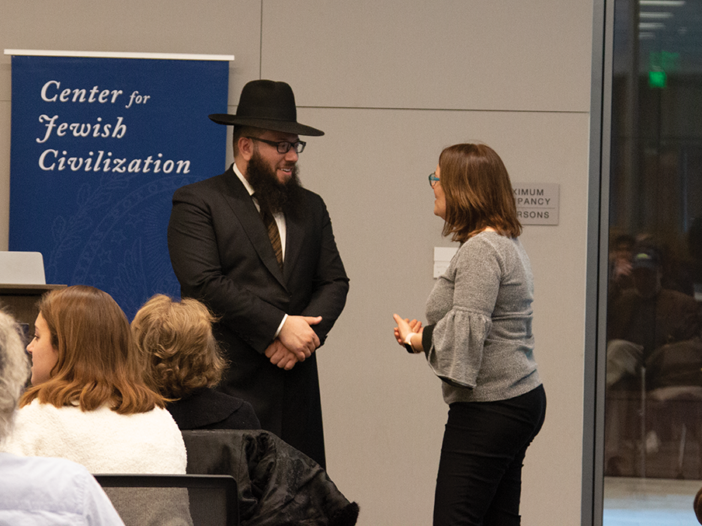 Acceptance of the LGBTQ community is essential, Rabbi Mike Moskowitz said at a Jan. 22 event, drawing from the lessons he learned during his 20-year tenure as an ultra-Orthodox rabbi.

The event, titled “Rabbinic Practice in LGBTQ Allyship,” was hosted by the Center for Jewish Civilization. At the event, Moskowitz, who is currently a rabbi at a progressive synagogue, spoke about LGBTQ acceptance and allyship within the Orthodox community.

Orthodox Jewish policies regarding the inclusion of the LGBTQ community typically adhere strictly to the Torah. Rabbinic teachings prohibit same-gender relationships, according to the Human Rights Campaign.

The Jewish community has an obligation to advocate for the LGBTQ community, as it is a community facing prejudice, Moskowitz said.

Amplifying the first-person narrative and getting to know people is an important step toward shedding preconceived notions, according to Moskowitz.

“It’s really easy to hate people and things that you’ve never met or experienced,” Moskowitz said. “The greatest advancements for modern LGBT inclusivity and equality have come from the availability of people being able to tell their own stories.”

Moskowitz currently works as the scholar-in-residence for trans and queer Jewish studies at the Congregation Beit Simchat Torah, a progressive New York synagogue that welcomes LGBTQ people. Moscowitz is also working toward a doctorate in Hebrew literature at the Jewish Theological Seminary and focuses his scholarship on the relationship between LGBTQ issues and Jewish thought, according to the event description.

While he has three ultra-Orthodox rabbinic ordinations and identified as ultra-Orthodox for 20 years, Moskowitz now identifies as religiously nonconforming, according to his website.

Overly focusing on religious text rather than keeping an open mind is a barrier to inclusivity, Moskowitz said.

“In speaking about homosexuality, homophobia, more than any sort of text-based argument is, I think, the greatest opposition to progress for LGBT inclusivity,” Moskowitz said. “And unfortunately, like antisemitism or Holocaust denial, it’s not because there’s a lack of evidence, that somehow we could offer one more proof that people would accept the reality.”

The event comes as a part of a larger effort to expose students to a diverse range of voices from the Jewish community this semester, according to Rabbi Rachel Gartner, the director for Jewish Life at Georgetown.

“It’s long been the policy of Jewish Life at Georgetown to find a variety of ways to bring diverse Jewish voices to campus,” Gartner said in an interview with The Hoya. “This semester we are doing that through robust programming that features guests and students from a range of Jewish backgrounds.”

Moskowitz’s message of acceptance was a strong and important message to students, according to assistant professor of Jewish civilization Jessica Roda, who helped bring Moscowitz to campus. Moskowitz’s views on allyship can be extended to other spheres of prejudice and hate, according to Roda.

“I think that the message that he’s sending is about acceptance of otherness and fighting against hate,” Roda said. “He’s extending it to hate speech and racism, antisemitism and the idea of creating opportunities to know the others and to create safe spaces for multiple experiences, sexual experiences, gender experiences and religious experiences.”