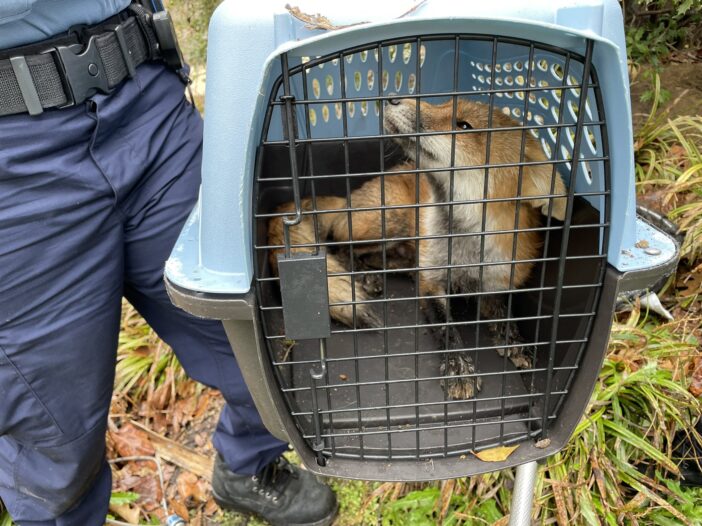 As she left the U.S. Capitol building on the afternoon of April 5, POLITICO Reporter Ximena Bustillo felt a nip at the back of her foot. When she turned around, she expected to see a squirrel or a rat. Instead, Bustillo came face-to-face with a fox that had sunk its teeth into her ankle.

Bustillo was one of at least nine people attacked by the rabid fox that incited chaos at the Capitol building in Washington, D.C., before Capitol Police and the Humane Rescue Alliance captured the creature April 5. The fox was euthanized April 6, and D.C. Health confirmed the animal to be positive for rabies that same day.

The attack came as a surprise to Bustillo, who was walking in the grass on the northern Senate side of the Capitol building.

“I was walking and it bit me from behind so I didn’t even see it,” Bustillo wrote to The Hoya. “It wasn’t like I was trying to feed or pet it.”

Bustillo went to the emergency department to receive rabies and tetanus shots, despite her injury being minor. She said many people reached out to check in on her after she tweeted about the fox attack.

According to D.C. Health, the fox’s three kits were later discovered in the fox family’s den, but had to be euthanized April 7 because of their exposure to rabies from the mother fox.

Elisabeth Wachtel (SFS ’24), who works as an intern at the U.S. Senate, was leaving her office Monday evening when she saw a flash of orange fur in front of her.

“I was really confused, because I did not expect that at all,” Wachtel told The Hoya. “Even when you see a dog that’s loose, it’s a little concerning, so to see a fox is just crazy. Also, because the Capitol isn’t near a park, I don’t know how a fox would even get to the Capitol.”

Full disclosure: Wachtel is a news writer at The Hoya.

The District is home to many animals that have become accustomed to city life, including foxes, and this particular fox was seen around the Capitol grounds in the days leading up to the attack.

Wachtel heard screams, and ran toward the Metro as quickly as possible to avoid becoming the rabid fox’s next victim.

Wachtel was scared to return to her internship Wednesday after reading about the fox on the news.

“I didn’t go outside for lunch, which I normally do, because I just wanted to stay in the building and I didn’t want to leave unnecessarily,” Wachtel said.

The fox also attacked Congressman Ami Bera (D-Calif.) the evening of April 4, biting into his pant leg. Despite not sustaining a direct injury, Bera visited a physician and received a set of shots out of an abundance of caution.

D.C. Health will be contacting everyone the fox bit and encouraged anyone who came into physical contact with the fox or its kits to reach out to D.C. Health.

“The DC Public Health lab has confirmed the fox that was captured yesterday tested positive for the rabies virus,” D.C. Health wrote to The Hoya. “DC Health is contacting all human victims who were bitten by the fox. Animal control will post informational flyers around Capitol Hill advising of the fox’s positive rabies status and encouraging people who might have been exposed to call DC Health.”

Foxes are one of the most likely carriers of rabies in the region, and the most common way for humans to contract rabies is through a rabid animal bite. The best way to prevent serious illness or death from rabies is to receive a series of rabies vaccinations — five shots over the course of 14 days — soon after being bitten. Rabies has a mortality rate of 99.9% for those who do not obtain treatment.

Even though the fox tested positive for rabies, District officials have no plans to round up other foxes in the area or to remove wildlife unless rabies testing is warranted by human exposure, according to D.C. Health.

News of the fox attacks quickly circulated on social media, causing a frenzy across the District. A Twitter account was even created for the fox — with the handle @thecapitolfox — and posted a statement from the fox’s perspective satirically denying biting any individuals.

“Today, I was forcibly removed from my den by very scary and mean individuals,” the tweet reads. “I am innocent of the crimes in question. This will not be the end.”

Despite the fear that came along with encountering the fox first-hand, Wachtel said she felt like a celebrity after seeing the fox that became internet famous.

“I almost thought it was a fever dream that I had made up,” Wachtel said. “I do feel like I really saw the current politics.”