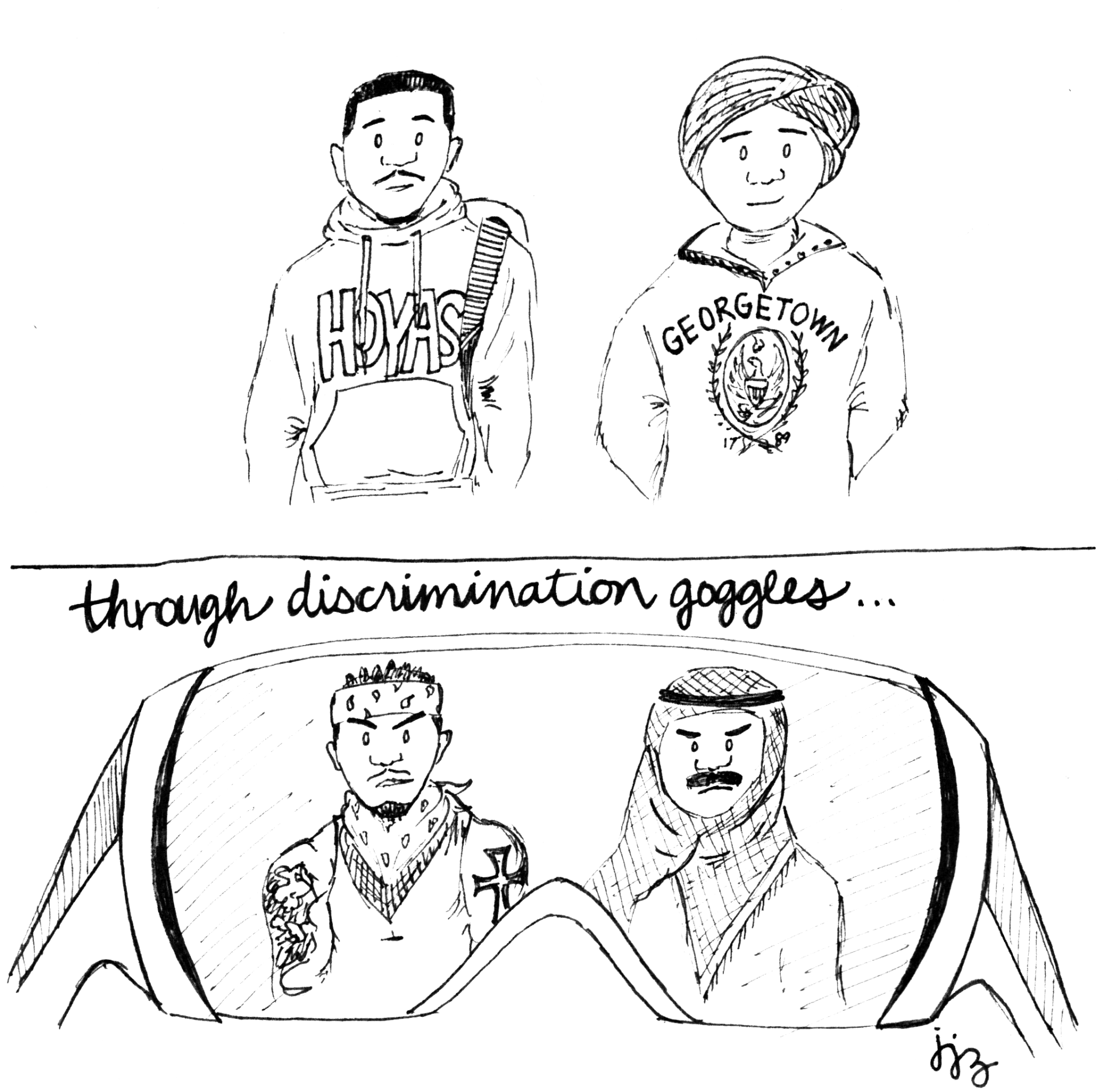 On Nov. 1, 2012, the Black House hosted a discussion about racial bias and discrimination on campus and the surrounding Georgetown neighborhood. Students shared their experiences as victims or targets of bias. Their stories revealed an unfortunate reality for students of color on Georgetown’s campus. Black male students spoke of being stopped and questioned by the police at night. They also cited white female students’ power walking or running away from them at night after late study sessions.

Another student spoke about his experience with a Georgetown College dean who advised him to “be the token that they want you to be” after he expressed concerns about a classroom environment. The room was heavy with students’ faces filled with disbelief that someone not only employed by the university but also instrumental in the academic advising of students would express such a sentiment. More shocking was that this student had spent three years at Georgetown and had never felt that there was a forum in which he could share this experience.

More stories poured in as students realized that their experiences were not uncommon and that they were not alone. At the last Black House hourglass discussion — a weekly discussion of various topics held by the residents — one freshman shared how he experienced racial bias during his first week on campus. His roommate had informed him that after seeing his name on the roommate assignments, there was some suspicion that he was not white. Shortly after the roommate’s parents met this individual, his roommate received a safe for his jewelry, medicine and valuables.

These conversations stemmed from one night of chronic racial bias last fall that was the proverbial “icing on the cake.” On Oct. 28, the Black House transformed into a free haunted house for the entire Georgetown community. However, within the first two hours of our program, we received two visits from Student Neighborhood Advisory Program personnel and one from a Metropolitan Police Department lieutenant. Our first visit was a warning about volume level. Our neighbors had been complaining about the long line of students outside our residence. We immediately made an announcement asking individuals to lower their voices; they complied. SNAP visited again after receiving a number of phone complaints from a neighbor. The SNAP officer acknowledged that he had walked past our residence several times and heard no unreasonable noise. He did not shut the program down because it was not a party and was in compliance with university policies. Before leaving, the SNAP office said, “You guys are in the right.” Noticing our confused faces, he continued with, “She’s probably calling because she sees a long line of black people.” Frustrated by what was obviously a racial bias, I asked, “What is our alternative? Do we stop being black?” He apologized to us repeatedly and wished us a sheepish “Happy Halloween.”

Within 30 minutes, we received another visit, this time from an MPD lieutenant. She said that the voices from the line were too loud. By this time, the line had shortened, with individuals only conversing quietly. While speaking with the lieutenant, we heard drunken yells and screams of white students as they stumbled down O Street. When we pointed this out to the lieutenant, she quickly responded saying that the whispers from the line were disturbing our neighbors, and lines were not allowed outside of residences. The issue of a line was not brought up by either of the SNAP officers who work for the Office of Student Affairs. We were forced to relocate our line to the corner and to usher people from the front gates to our house. We inquired about a policy banning line outside of our house but we were met with an ultimatum — either we comply or be shut down. We complied.

Students of color are constantly fighting notions about their right to be and learn here. Micro-aggression attacks accuse us of being beneficiaries of affirmative action or athletic scholarships in a way that is unworthy of Georgetown. We experience racial profiling and discrimination outside of the classroom with little to no acknowledgment from the greater Georgetown community.

Unfortunately, besides the Georgetown University Bias Incident Reporting System, little to no outlets of expression exist for students who fall victim to these incidents. Furthermore, the system merely stores reports of incidents in a database. We cannot continue to allow these instances to be silenced or forgotten. We challenge Georgetown to listen to the stories of its marginalized students and recognize that there is a need for action from the university. Until Georgetown recognizes these issues and acknowledges their existence, the minority community will continue to bear the burden of proving the legitimacy of the issue.

We challenge Georgetown to reevaluate how it views the priority of the relationship between its students and its neighbors. We challenge the university to hold an open forum with the Department of Public Safety and the MPD personnel that frequent campus on weekend neighborhood patrol to demonstrate its commitment to not only the safety but also the civil rights of its students.

This is not only a “black people problem” or a minority problem. It is a problem for the entire university. In the words of Dr. Martin Luther King, Jr. in “A Letter from a Birmingham Jail”: “Injustice anywhere is a threat to justice everywhere. We are caught in an inescapable network of mutuality, tied in a single garment of destiny. Whatever affects one directly, affects all indirectly.”