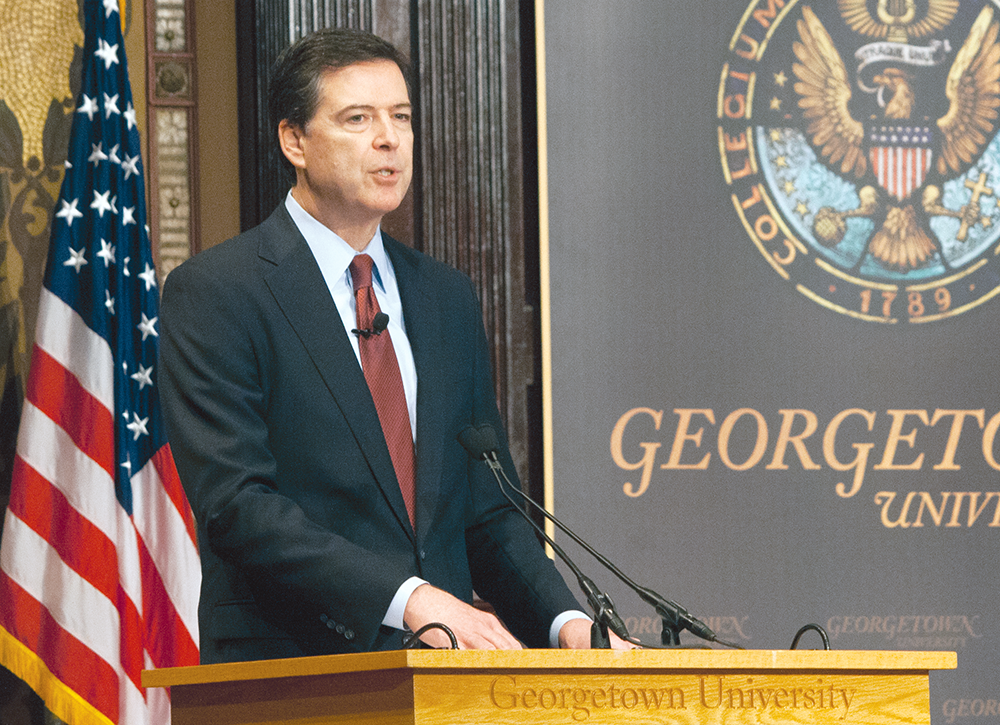 Federal Bureau of Investigation Director James Comey spoke about the subconscious racial biases present in law enforcement officers, disproportionate challenges faced by young men of color and other issues in the intersection of race and law enforcement Thursday morning in a lecture co-hosted by the McCourt School of Public Policy and the Office of the President in Gaston Hall.

Comey’s remarks were unusual for an FBI director, with previous directors only publicly discussing race in the context of civil rights issues such as investigations into murders committed by the Ku Klux Klan. No other FBI director has publicly analyzed racial tensions between black communities and law enforcement.

“This is a topic whose importance and urgency have been exemplified in the events in Ferguson, Mo., Cleveland, Oh., and in Staten Island, N.Y., and in communities across our country,” DeGioia said. “At this current moment, when our country seeks a greater understanding, a renewed of sense of responsibility for one another and a stronger mutual trust, we’re grateful for this opportunity to provide a venue for dialogue on these matters.”

After remarking on the appropriateness of his lecture, titled “Hard Truths: Law Enforcement and Race,” being held in Healy Hall, a building named for former University President Fr. Patrick Healy, S.J. — born into slavery and the first black man in America to earn a Ph.D., to join the Jesuit order and to become the president of a predominately white university — Comey went on to discuss the “hard truths” that he said must be acknowledged in conversations about law enforcement and race.

“All of us in law enforcement must be honest enough to acknowledge that much of our history is not pretty,” Comey said. “At many points in American history, law enforcement enforced the status quo — a status quo that was often brutally unfair to disfavored groups.”

Citing his own Irish heritage, Comey discussed how law enforcement treated the Irish unfairly and often regarded them as drunks and criminals in the early 20th century.

“The Irish had some tough times, but little compares to the experience on our soil of black Americans,” Comey said. “That experience should be part of every American’s consciousness, and law enforcement’s role in that experience, including in recent times, must be remembered. It is our cultural inheritance.”

Comey said that he believes that now most police officers enter law enforcement with a genuine desire to serve others, regardless of race, but are eventually swayed by subconscious biases and cynicism.

“Police officers on patrol in our nation’s cities often work in environments where a hugely disproportionate percentage of street crime is committed by young men of color,” Comey said. “Something happens to people of good will working in that environment. After years of police work, officers often can’t help be influenced by the cynicism they feel. A mental shortcut becomes almost irresistible.”

Comey, who, according to DeGioia, expanded new FBI agents’ training to include a mandatory visit to the Martin Luther King Jr. memorial, stressed the importance of law enforcement officers making a conscious effort to resist acting on racial biases, which are often subconscious.

Comey also proposed increased outreach in order to lessen the level of distrust that is often present between police officers and the communities they serve.

“We simply must see the people we serve,” Comey said. “But the seeing needs to flow in both directions. Citizens also need to really see the men and women in law enforcement.”

“So many boys and young men grow up in environments lacking role models, adequate education, and decent employment. They lack all sorts of opportunities that most of us take for granted. … Young people in those neighborhoods too often inherit a legacy of crime and prison,” Comey said.

Comey cited data that indicates that the percentage of young black men who are not working or not enrolled in school is nearly double than that of young white men.

He then praised President Barack Obama’s “My Brother’s Keeper” initiative, which aims to close opportunity gaps experienced by young men of color and help these young men find good jobs or go to college by offering them mentoring and support networks.

In August, the Beeck Center for Social Impact and Innovation collaborated with the U.S. Department of Education on the initiative by hosting a data jam examining the educational outcomes for minority students.

Comey said that the initiative is an important effort in solving some of the deep-rooted problems that cause young black men to turn to crime.

“Law enforcement is not the root cause of the problems in our hardest hit neighborhoods,” Comey said. “Police officers, people of enormous courage and integrity … are in those neighborhoods risking their lives to protect folks from offenders who are a product of problems that will not be solved by body cameras. We simply must speak to each other honestly about all these hard truths.”

Some of the students in attendance noted that Comey’s speech was unique.

“I thought he gave a really well-balanced presentation of what’s been going on lately,” Samantha Foggan (MSB ’15) said.

Nick Manley (SCS ’17), who attended the lecture, said he thought that Comey’s frankness was rare among government officials.

“He’s definitely shown a genuine effort, which is rare among government appointees. … He actually seemed to have a genuine concern for these events that are happening and [wanted to] make a genuine effort to change,” Manley said.

Vice President for Mission and Ministry Fr. Kevin O’Brien, S.J., invited students to continue the conversation about law enforcement and race in a lunch this afternoon in the Healey Family Student Center.

“We would like to provide our students an opportunity to discuss the issues raised by Director Comey at greater length and in a conversational setting,” O’Brien wrote.

Thursday’s speech was not the first time that Comey spoke publicly about the fatal shooting of unarmed black teenager Michael Brown by white police officer Darren Wilson and the protests that followed in Ferguson, Mo., and across the country. Comey briefly discussed Ferguson at an event in Salt Lake City, Utah, in mid-August.

However, Thursday’s talk was the first time he spoke candidly about race and law enforcement.

His frank discussion of the matter has garnered national attention, with many news sources, including The New York Times, The Washington Post and The Wall Street Journal, covering his speech.