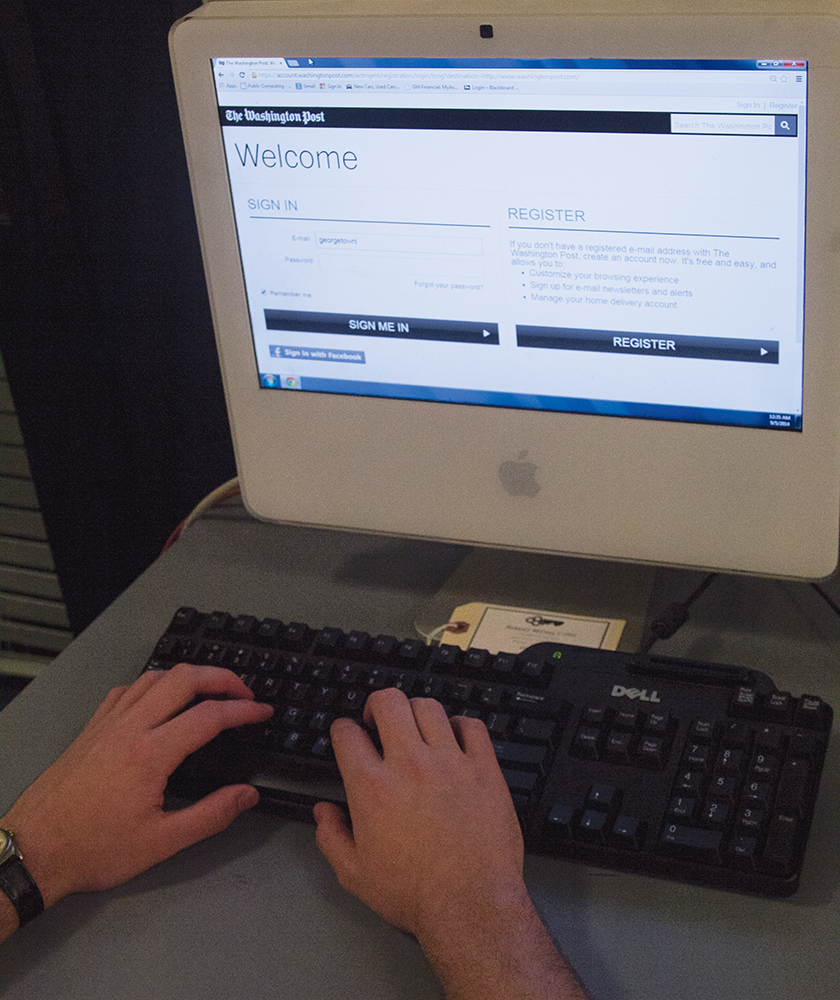 The Georgetown University Student Association has purchased online subscription passes to the New York Times, providing a short-term fix to the cut of Georgetown’s Collegiate Readership Program in March. These 24-hour passes allow up to 100 students to use The New York Times site at one time, and cost GUSA around $800 per eight-week period.

GUSA President Trevor Tezel (SFS ’15) and Vice President Omika Jikaria (SFS ’15) worked with senators on GUSA’s Finance and Appropriations Committee to develop a cost-effective short-term solution to respond to the student need for a news source.

“We got a lot of student reaction that was negative to the cutting of the Collegiate Readership Program, and we saw it as valuable,” Tezel said. “We had agreed with Fin/App that there might have been more cost-effective ways to get news to students, but we didn’t think that this program should be cut altogether. Recognizing that students wanted the news, wanted these newspapers, we wanted to provide something in the short term that would show that GUSA is still prioritizing this as a service before we move into next year.”

Before the Collegiate Readership Program was cut from GUSA’s budget for fiscal year 2015, it provided free print copies of The Washington Post, The New York Times and USA Today in locations around campus, including Sellinger Lounge, Red Square and Lauinger Library. Last year, the program received $14,000 in funding.

The New York Times paywall blocks those without a subscription from viewing more than 10 articles per month. The Washington Post charges $9.99 a month for unlimited online access, although this fee is waived for readers with an email address ending in “.edu.”

Meredith Cheney (COL ’16), a GUSA senator on the Fin/App committee, said that The New York Times online subscriptions worked well because they allow GUSA to analyze how many students use the program each day. Before cutting Collegiate Readership, GUSA members said they suspected students were not fully taking advantage of the program, but did not have a way to measure that claim.

“The New York Times financially made sense, and provided online passes, which we would be able to analyze data on usage,” Cheney said. “It was important to us to be able to evaluate whether people were actually going to use online subscriptions like they said they would.”

According to Cheney, GUSA is working to create a more long-term system, potentially expanding to reach more Georgetown students, including those in graduate and continuing studies programs. A factor in the decision to cut the Collegiate Readership print program was the belief that graduate students and professors were taking advantage of the free newspapers earlier in the day, before undergraduates got to them.

“Long-term speaking, we are hoping to work with the library and also faculty and staff, as well as departments across campus including continuing studies and graduate students to implement a campus-wide program,” Cheney said. “That would be my ultimate hope. Also, on the sustainability front I think it would be wise to strongly consider going completely online.”

Cheney said she hopes that the program can evolve to include a variety of online sources.

“I think that being on a college campus is very much a bubble, and you have to put effort in to burst that bubble,” Cheney said. “I think it’s important to first be diverse in your intellectual scope, and I think it’s also important to be able to decipher which news source you want to educate yourself with. I hope that we can work with Georgetown to diversify our sources.”

Although GUSA has provided an online subscription to students, Jack Bennett (COL ’17) said that he still plans to push for print newspapers on campus.

“Our generation is not aware of the world around us. We read BuzzFeed and Huffington Post and get our news like that,” Bennett said. “There have been a number of studies coming out in the field of sociology on when you have people getting their information from the internet, people are only going to websites that support the views that they already have.”

Bennett said that he believes that The New York Times subscription is a good start on the way to a more robust readership program, but worries that solely online content could be intellectually detrimental.

“I think that if we were to keep not reading the newspaper and it was to eventually just become online stuff, I think that people would totally phase out anything that disagreed with their preconceived notions of how the world works, and there is so much more depth to a lot of issues that people don’t approach with BuzzFeed and everything else,” Bennett said.