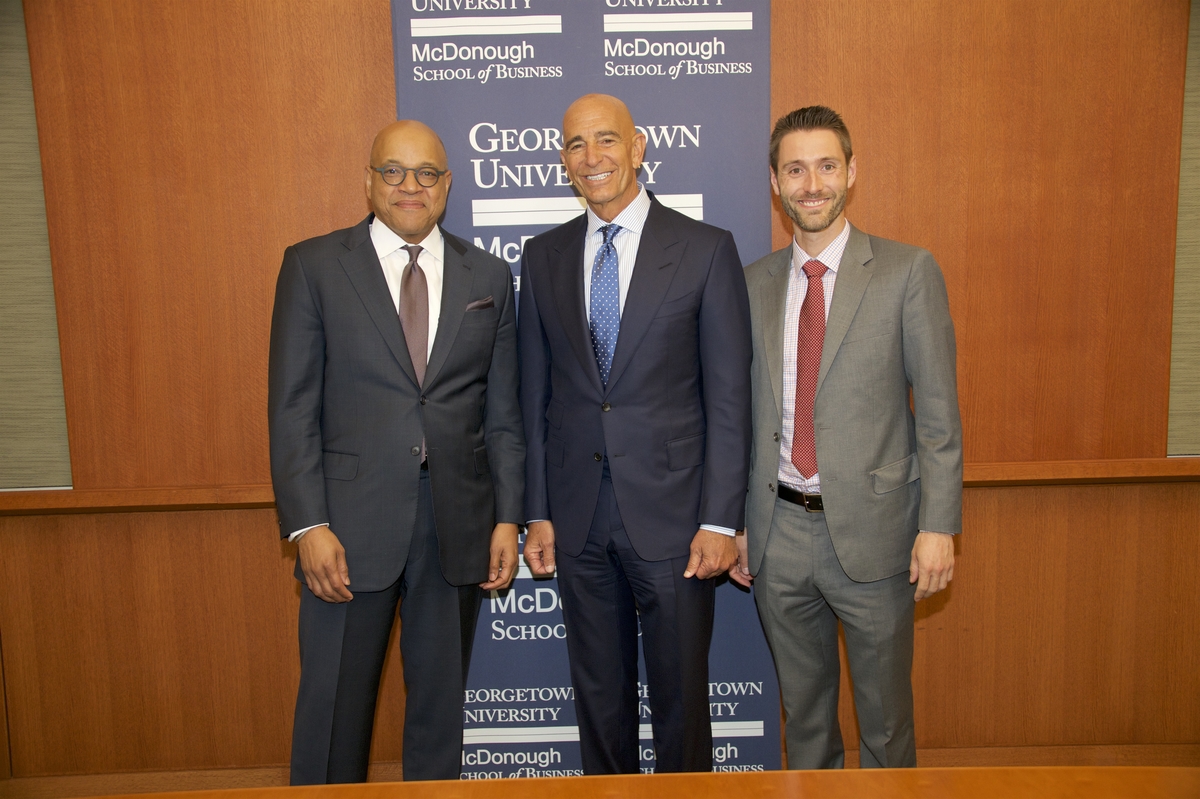 The Steers Center for Global Real Estate held its annual Real Estate Luminaries Series event April 21, convening industry leaders to discuss the history of the real estate market, its current volatility and the future of investing.

Cypher began by surveying the world market’s current volatility, expressing that the ongoing recovery of developed nations from the 2007 financial crisis, terrorism, the United States presidential election and other factors contribute to a unique global dynamic.

In light of the unstable global market, Barrack said finding value in investment can require acting differently from one’s peers.

Barrack, who is personally valued at over $1 billion by Forbes, also explained that investing counterintuitively in mundane companies in the face of seemingly exciting innovations sometimes yields ample profit.

“The single best performer on the New York Stock Exchange is public storage: boring, uninspiring, no architectural twist, no triple financial backdrops, steady eddy,” Barrack said. “You kind of have to fight your intellectual acuity sometimes to do the basic things, not necessarily the most exciting things.”

Barrack founded Colony Capital in 1991 after the crisis of the savings and loan business — the industry responsible for issuing mortgages — when investors shied away from the real estate market.

“[Before the run-up to the 2007 crisis] it was the availability of debt, it was the over-enthusiastic abundance of debt, easing under-writing standard, that led to higher and higher prices,” Cummings said. “This time around it’s quite different. … It’s now more fear as opposed to enthusiasm.”

When asked to describe their greatest fears as real estate investors, the speakers gave the same answer: an unpredictable event, such as terrorism or a disruptive political development. However, Arnold said the effect of terrorism on the market is not as severe as might be expected.

“As we’ve dealt with more volatility and turmoil in the world, we seem to be able to shake it off,” Arnold said. “We have a lot of investment in Paris, we have investment in Brussels and there have been terrible things that have happened there recently, but those markets weren’t disrupted very long.”

Cummings stressed that calculated diversification is the most effective preventative measure against unpredictable events, while Barrack emphasized that domestic markets could be a relative safe haven from such disruptions.

“[In the United States] you have the rule of law, you have a culture and civilization that’s fair, you have a currency that’s stable and you have a level playing field,” Barrack said. “There’s nowhere else in the world where that happens.”

Despite some uncertainty regarding the upcoming American elections, Barrack was confident the country’s bureaucracy would prove a source of stability regardless of potentially substantial policy shifts under new leadership.

Arnold discussed some of the benefits and challenges of investing in Washington, D.C., specifically.

“I think it’s a much easier conversation for most foreign investors to talk about doing something in the District [than in other places],” Arnold explained. “The challenge for people has been both pricing and the difficulty in getting in and being frustrated that it’s difficult to find assets.”

Ultimately, Barrack said the greatest advice he could give has nothing to do with market trends or investment savvy, but rather with personal relationships.

“The edge is long-line relationships, curated over long periods of time,” Barrack said. “Hoard that reputational capital. Take advantages of opportunities as they come, and lower your expectations. And with lowered expectations comes capital. It’s like marriage.”

Haley Jeon (COL ’18), a member of the Georgetown Real Estate Club, said the event motivated her to continue studying the real estate industry.

“It’s really great to see people that have been in the industry for over 30 years,” Jeon said. “They have so much knowledge and experience that being here and listening to them … humbles you and also makes you very intrigued in the industry, and drives you to learn more.”