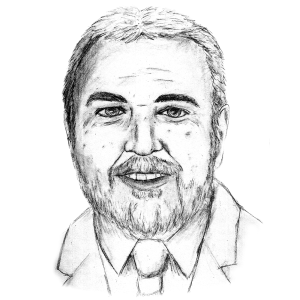 This is a literary pentimento. In my untutored understanding, pentimento is an underlying image in a painting, a kind of original draft that is found underneath a top layer that is, itself, another painting. It comes from the Italian word, pentirsi — to repent, to rethink. What you are about to read is my rethinking of something I wrote almost 30 years ago for “Ye Domesday Book.”
Jacob Bronowski’s “The Ascent of Man” was a BBC television series filmed in 1973. In one of the later programs, he is found walking near — and then kneeling in — a pond of water at Auschwitz. Decades earlier, the ashes of the bodies of millions of murdered human beings were poured into that pond. Kneeling there, Bronowski asserted that that monstrous crime happened because people did not doubt the correctness of what they were doing; they believed that they had absolute knowledge. He continued by noting that one of the virtues of science is that it has doubt at its very foundation, for nothing can be known with absolute certainty. When I heard Bronowski’s words, I recalled those of my revered ninth grade science teacher, Ms. Lucille DiBiase, who always encouraged us to “keep the question mark.” She wanted us to continue, throughout our lives, to question received truths, to explore and discover, without taking anything for granted.
I should like to propose to you that it is in the nature of a Georgetown education that the idea of doubt is fostered, nurtured and — with hope — sealed in you forever.   There are times, though, when doubt, the opposite of certainty, may appear to be less a virtue and more an enemy of the spirit. For example, a first-semester senior once told me that he was angry at Georgetown, saying, “I have taken all these courses and written all these papers and exams, and I don’t know anything.” That included not knowing what he wanted to do with his life. At that point, I suggested that he write a thank you note to the president of the university. After all, the oracle at Delphi told Socrates that he was the wisest man in Athens because he was the only one who knew enough to know that he didn’t know anything. When we realize deeply that there is so much left to learn that it dwarfs what we already know, we understand that we can never possess absolute knowledge. This kind of understanding can be a source of great hope for humanity.
So am I advocating a life filled with doubt? Hardly.
We needn’t use doubt to an extreme. Recall Aristotle’s idea that a vice is a virtue taken to an extreme. What I do advocate then is healthy doubt — doubt in moderation.  Therefore, if you have a job, it doesn’t mean that that particular position should be your career for life with a mindless, robotic inertia at its foundation. It means that each day, week, month or year, you evaluate just how much that position contributes to your fulfillment and that of your family, and how much it prevents you from experiencing or achieving. This sort of healthy doubt, or self-examination, implies nothing about the “given” nature of the status quo. Tomorrow need not be the same as today especially if today is — and many yesterdays were — unfulfilling. Of course, the opposite may be true. With such an approach, you will be immune to that abysmal sadness that accompanies the unexamined life: “I’ve had this job for the past 20 years and never gave thought, until now, that I’ve never liked it.”
Perhaps doubt and self-examination will lead to changes in your life, perhaps not, but whatever ensues, you will be able to treat life as the adventure that, with the Good Lord’s grace, it was meant to be. Whatever the result, keeping the question mark and using doubt as an ally, you will know that you are living, and have lived, an examined life illuminated by the education and encouragement you received at Georgetown. Furthermore, you will be a far better citizen of the world, for you will understand in a powerfully informed way what it means to be women and men for others. A world filled with women and men for others could never include someone kneeling at a pond as Bronowski kneeled at Auschwitz, because ponds such as that would not exist.
Steven R. Sabat is a professor in the department of psychology. He is one of the alternating writers for THE PSYCH FACTOR, which appears every other Tuesday.