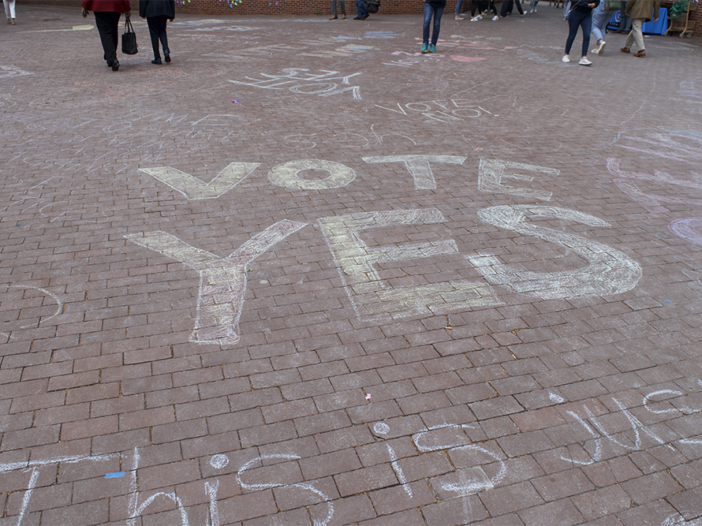 Georgetown University will launch an initiative supporting community-based projects with GU272 descendants after a student referendum in April voted in favor of a reconciliation fund to benefit the descendants.

The initiative, which will include an advisory board composed of faculty, students, alumni staff and descendants, will support new projects focused on education, research and service under the advisement of the descendant communities, University President John J. DeGioia (CAS ’79, GRD ’95) announced in a campuswide email Tuesday. However, the initiative will not incorporate the fee proposed by the April student referendum.

In addition to the primary projects of the initiative, the university will also form two additional advisory groups to continue the university’s academic and research initiatives and public history efforts, two university projects focused on expanding understanding and memorializing Georgetown’s history as it relates to slavery.

“This work will be grounded in our academic mission of education, research, and service; will provide opportunities for student leadership; and will be guided by extensive consultation and engagement with Descendants,” DeGioia wrote.

In April, 66.1% of students voted “yes” on the GU272 referendum, which called for Georgetown administrators to add a $27.20 semesterly fee to students’ tuition. The fee would establish a fund to benefit descendants of the GU272, the 272 enslaved people sold by the Maryland Province of the Society of Jesus in 1838 to financially sustain the university. The referendum had a 57.9% turnout — the highest turnout in recorded student government electoral history.

The university plans to establish the initiative without implementing the semesterly fee, but funding for the new program will be comparable to or higher than the amount that would have been raised by the proposed fee, according to DeGioia.

“The University will ensure that the initiative has resources commensurate with, or exceeding, the amount that would have been raised annually through the student fee proposed in the Referendum, with opportunities for every member of our community to contribute,” DeGioia wrote.

Before deciding on the details of the initiative, the university held conversations with Georgetown’s board of directors, the descendants, alumni, faculty, student leaders and staff on the ideas put forth in the referendum, according to the email. Projects will be funded beginning next fall, matching the timeline outlined in the April referendum.

The GU272 Advocacy Team, an on-campus student group that raises awareness for descendants and created the referendum, said the proposed initiative delegitimizes and undermines student effort.

“The decision outlined by President DeGioia, as detailed in the statement released, was made without student or descendant input and directly negates the wishes of the 2541 students who voted in favor of the referendum,” the group wrote in a Facebook statement. “The suggested action, including the proposed advisory group, contains no clear criteria, accountability measures, or transparency with regards to construction or implementation.”

The university’s announcement came as a surprise to Georgetown University Student Association President Norman Francis Jr. (COL ’20) and Vice President Aleida Olvera (COL ’20), who had both engaged in discussions with the Georgetown administration after the April referendum.

“Despite months of meetings and talks, this is the first that many of us are hearing about this advisory group and while we like the fact that action is being taken, we ultimately want the actions described in the referendum,” Francis and Olvera wrote in an email to The Hoya. “The fund should be mandatory and not voluntary because this is a debt that we need to repay and the undergraduate student body voted to pay for it.”

Earlier this month, students protested during on-campus meetings of Georgetown’s board of directors. The board held at least three meetings that week — both with and without student representatives — during which members discussed the referendum’s results but did not provide a concrete timeline regarding the next steps.

The board held similar discussions at its June meeting, which also resulted in no concrete timeline. Georgetown is not obligated to enact the results of student referenda and thus is not bound to enact the fee.

The university has met some of the recommendations outlined in the 2016 report by the Working Group on Slavery, Memory and Reconciliation, which was formed in fall 2015 by the university to facilitate dialogue in the Georgetown community about the legacies of slavery.

The advisory group and future efforts toward reconciliation will attempt to center descendant narratives as the project moves forward, according to DeGioia.

“All of these steps will be taken with the deepest respect and consideration of Descendant perspectives and while ensuring that the process of Dialogue underway continues to be supported and prioritized,” DeGioia wrote.

In September 2019, the university began a search for candidates to work as the librarian for Collections on Slavery, Memory and Reconciliation, started the effort to hire an archivist focusing on the Maryland Province of Jesuits and issued an apology for the sale of the 272 enslaved people in 2017.

The university’s decision to commit resources to the new initiative presents an opportunity for members of the Georgetown community to make a positive contribution, according to professor Adam Rothman, who served on the working group and is the curator of the Georgetown Slavery Archive.

“It will be exciting to see what develops and how students join into collaborations with the descendant community,” Rothman wrote in an email to The Hoya. “I think that faculty can play an important role by designing curriculum to foster learning, reflection, and action that draws from and is inspired by our history and that of the GU272 descendant community.”

This article was updated on Nov. 1 to include additional comments regarding the university’s announcement.