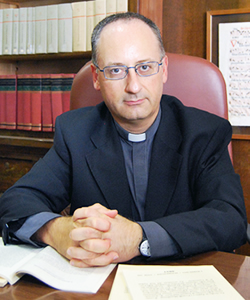 Hosted by the Initiative on Catholic Social Thought and Public Life, which was founded to promote dialogue on Catholicism and national and global issues, the event was led by a key adviser to Pope Francis and the editor-in-chief of La Civiltà Cattolica, Fr. Antonio Spadaro S.J.

It featured a reflection on Pope Francis’ first five years as the bishop of Rome and leader of the Catholic Church.

In his opening remarks, DeGioia touted the role that the initiative has played in helping the community understand Pope Francis’ role over the past five years.

“The Initiative has helped to foster a rich context for us to understand the leadership of Pope Francis, his call for dialogue, his challenge to care for creation and his commitment to the poor and vulnerable,” DeGioia said.

DeGioia also highlighted the event as an opportunity for Georgetown to examine its role as a modern Jesuit institution.

“This moment provides for us a time of reflection and conversation,” DeGioia said. “We seek to deepen our understanding of the tradition that animates our community and strengthen our enduring commitment to our mission as a Catholic and Jesuit institution at this challenging time in our world.”

In his reflection of the pope’s first five years, Spadaro spoke about the vision for the church moving forward, specifically emphasizing the pope’s encouragement of intrareligious understanding in world politics.

“Francis seeks to dispel the narrative of a toxic final clash of religions that nourishes the fear of chaos,” Spadaro said. “This is why Francis is carrying forward a systematic counternarrative to the narrative of fear. There is a need to fight against the manipulation of this era of anxiety and insecurity.”

Spadaro also outlined the pope’s thoughts on the Catholic Church’s involvement in public life. He said that Catholics must be actively involved in society, not removed from it, if they hope to help forge peace in the world.

“Faithful Christians should not opt for considering the church as a counter-society … but a church that is in the world society and endowed with it,” Spadaro said. “A church that extends their relationships in order to gather synergy for the constitution of peace.”

Cooperation, particularly with those who have different ideological views, is also needed in a divided world, Spadaro said.

“The pope rejects the mixing of politics, morals and religion that leads to the use of language that divides reality between the absolute good and the absolute evil,” Spadaro said. “This is why Pope Francis wants to meet the major players in the action, to create an encounter in which all sides can think together, seeking the greater good.”

In the dialogue following Spadaro’s speech, panelists Erlandson, Pimentel and Powers reflected on the pope’s role throughout his papacy.

Erlandson stressed the importance of Pope Francis as a modernizing and revitalizing figure for the Catholic Church today.

“At a time when the church was maybe a bit moribund — and certainly in the United States — he became this completely new voice,” Erlandson said. “I think one of the great contributions [of Francis] was just reinserting the church into the national and international dialogues on the concerns and issues of the day.”

Powers also emphasized the role Pope Francis has played in bringing the Catholic Church back to mainstream society as well as to former Catholics.

“He has made the church relevant in a way that maybe it wasn’t to secular culture before,” Powers said. “And I think for people who were Catholics, who felt rejected by the church for various reasons, they now were feeling … well maybe there is something there. Maybe I can come back. Maybe I’ll be welcomed.”