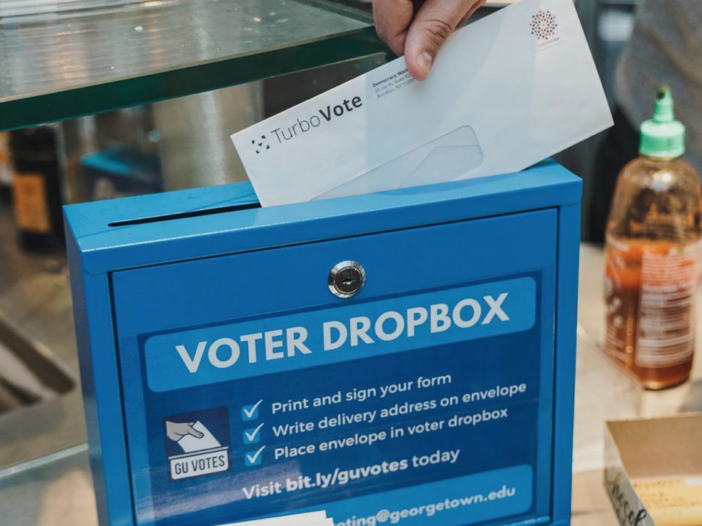 Instead, Edmundson, an international economics student, faced a largely virtual election experience, as the ongoing COVID-19 pandemic forced him to celebrate the election from his hometown in Pittsburgh, Pa., much different from the anticipated election night watch party fervor typical in the Healey Family Social Center.

“I didn’t think I would be hearing Joe Biden speak on election eve in Pittsburgh; I always imagined I’d be in in the HFSC with friends like any other year,” Edmundson wrote in an email to The Hoya. “Now I can’t believe that I might not even be in DC for the inauguration. Its surreal that I might be watching the inauguration from my home tv.”

Like Edmundson, many Georgetown University students have had to reckon with changes to their election celebrations and commissorations, watching the election from their living room televisions, and anticipate witnessing President-elect Joe Biden’s inauguration from behind a screen — missing out on the Georgetown tradition of a day off class to attend the event in person.

This shift in experience led students to experience both advantages and drawbacks amid the 2020 election. As a result, they have broken Georgetown tradition but pursued new opportunities and ways to engage with the United States political system.

Having to forgo memorable in-person events and experiences these events this year was incredibly disappointing, according to Edmundson.

“I really do think it is a hallmark of the Georgetown experience. Regardless of political belief, the weeks leading up to the election would have been filled with the important dialogue and understanding,” Edmundson wrote. “Watching the election with friends or rushing to the White House when the election is called were events I was looking forward to since freshman year.”

In a year without a pandemic, typical on-campus events surrounding the election drive up student engagement and activity, according to Diana Owen, an associate professor of political science in the Communication, Culture and Technology graduate program.

“From what I’ve observed in all my years of presidential elections on campus, the election really becomes something that’s pretty vibrant on campus,” Owen said in an interview with The Hoya. “It’s such a momentous occasion in American life, so Georgetown students have many opportunities to engage with the election, either in a formal educational setting or informally.”

Despite efforts to maintain political socialization and engagement virtually, online events do not compare to in-person events and engagement, according to Owen.

“I’m not sure to what extent you can replicate the [whole experience] virtually,” she said. “Research has shown that kind of peer-to-peer interaction really does work to get more students involved, when they can actually have some of their classmates talk to them, engage in discussions and do everything in a face-to-face way.”

As a result of typical in-person events and efforts by on-campus organizations, Georgetown boasts high levels of student engagement in elections, according to the McCourt School of Public Policy. This high level of enthusiasm has often led to contentious debate between political groups on campus. After Georgetown hosted the Climate Forum in September 2019, student groups clashed when the Georgetown University College Republicans hosted a rebuttal event.

Beyond the campus environment and enthusiasm itself, many professors and students see Georgetown’s location as an advantage, according to Mark Rom, a professor of ethics and American government at the McCourt School of Public Policy.

“Physically being here in Washington, D.C., enhances the experience,” Rom said in an interview with The Hoya. “The stakes are higher, and the students are just more engaged. In my classes, for example, there is always an exceptional level of excitement.”

To Rom, the loss of personal connection to students and peers during the election shifted the experience of the 2020 election for students completely.

“It’s like how you can watch a video of a concert, and you hear the same music as if you were there, but it’s a much different experience to feel the crowd around you and the excitement,” Rom said. “During the pandemic, we don’t have those personal connections. You can’t just say, ‘Hey, let’s go down and join the rally at the Capitol.’ It’s just a different feeling compared to the spontaneity and joy that we’ve had in previous elections.”

Many students noticed this shift in experience and sought alternative methods to foster personal connection during the election. Sina Nemazi (COL ’21) did just that while serving as the chair of DMV Students For Biden, a group of college and high school students from the D.C. metro area working to elect Joe Biden.

Nemazi was excited to witness the election buildup on campus in the fall, but experienced a dramatic change in his experience after the shift online, he said in an interview with The Hoya.

“The election felt really stretched out. I’m sure it would’ve been so different with all these college students watching it together,” Nemazi said.“I feel like we were all in our own spheres watching it. It was kind of weird.”

This year, instead, students and organizations have found new ways to encourage political engagement online. Many students took advantage of the virtual environment and worked on local campaigns or at hometown polling locations on Election Day.

For Nemazi and his team at DMV Students for Biden, modifying their campaign strategy to fit an online environment proved challenging. Once they were able to adjust, however, they found the virtual environment effective, according to Nemazi.

“I thought it united the Students for Biden groups across the country even more so because we had to work together with students from Michigan and Florida and Texas and all these things,” Nemazi said. “It was actually like a united front, in a way. It was just a different strategy, and I don’t know whether it would have been more effective than being in person, but I did find some strengths in it.”

When it comes to participating in campaigns, it was advantageous for students to be in their home states this election cycle, according to Mo Elleithee (SFS ’94), founder and executive director of GU Politics.

“All the real action is out in the states,” Elleithee said in an interview with The Hoya. “I’ve always told students that if you’re interested in campaigns, the best place to be is where the campaigns are taking place, to be up close and personal, to see the ads that candidates run that we don’t see in D.C.”

GU Politics also innovated, adapting to virtual events and expanding upon typical programming, according to Elleithee.

“What this entire election cycle demonstrated — not just for Georgetown, but for the entire country — is that we can be creative in how we build a sense of political community,” Elleithee said in an interview with The Hoya. “We were still able to pull back the curtain and give students access to political players. In some cases, it was actually a little bit easier because speakers who were scattered around the country could participate.”

More students engaged with programming and events than previous years as people were able to tune in from various locations around the world, according to Elleithee.

“If anything, we got increased turnout for many of our events, in part because it was easier to get speakers,” Elleithee said. “I think it was also because students who were bummed they couldn’t be on campus were able to still plug in to a bigger community of folks.”

For students living at home, the virtual environment brought new opportunities to observe and engage in the election outside of participating in campaigns, according to Isabella Dujarric (SFS ’23), who stayed home in New York City this semester.

“I was definitely more plugged in to local elections than I would have been at school,” she said in an interview with The Hoya. “It’s just different being there yourself. In the days leading up to the elections, there were people standing around the city handing out fliers, talking about their candidates and canvassing outside.”

Dujarric chose to vote in person on Election Day in New York City rather than vote early or by mail. Initial data has found 70% of voters aged 18 to 29 voted early or by mail in the 2020 election, according to a study by the Tufts Center for Information & Research on Civic Learning and Engagement.

“It was my first time voting in a presidential election, and I wanted to get the full experience of going to the polls on Nov. 3, going into the booth and hand placing my ballot into the machine,” she said. “My family and I went in the morning before the crowds and felt safe with all of the COVID precautions. It was definitely a fulfilling experience, one I was lucky enough to partake in in person.”

Even after Election Day itself, many students still feel the impacts of a virtual experience. Inauguration Day, typically a holiday for students on campus, will not be celebrated by Georgetown this year, as it is a part of the extended winter break announced as part of the Spring 2021 semester reopening plans. Instead, students will be forced to come up with their own celebrations.

Despite not being able to experience the upcoming inauguration through an on-campus environment, Nemazi still plans to celebrate virtually.