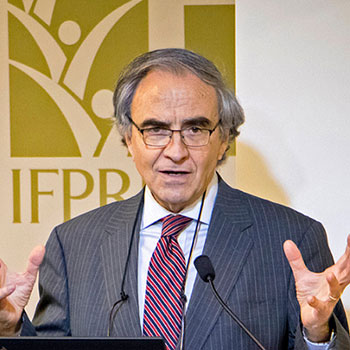 The food system in Latin America must be reformed to create healthier options for low-income and vulnerable groups, Eugenio Díaz-Bonilla, head of the International Food Policy Research Institute’s Latin America Program, said at an event Nov. 27 at the Intercultural Center.

A food system includes the inputs and outputs of all the processes involved in the production and distribution of food, from growing the food to the disposal of food. The International Food Policy Research Institute’s Latin America Program seeks to eliminate malnutrition by evaluating food practices within the Latin American food system.

Though many Latin American countries h xave poverty and hunger rates far lower than other developing regions, their residents still struggle with maintaining an adequate level of nutrition in their diets and many suffer from vitamin deficiencies, according to Díaz-Bonilla.

“About 200 million people suffer from vitamin deficiencies, although this is an old number that the Food and Agriculture Organization is recalculating,” Díaz-Bonilla said. “About 1.9 million people are at least overweight.”

The Latin American food system involves the contributions of 50 percent of the global population and generates around 30 percent of greenhouse gas emissions, Díaz-Bonilla said.

Restructuring the entire food system poses logistical challenges and risks negative effects on the economy and employment, according to Díaz-Bonilla.

“You want to have a food system that generates good employment, that reduces poverty, that uses low energy,” Díaz-Bonilla said. “There is a basic reality in economics that if you have more than one objective, you need more than one instrument. It’s not easy to coordinate.”

Minimal access to health options causes obesity among those of a lower economic status, according to Díaz-Bonilla.

Yet, the issue of obesity is difficult to quantify because of other factors such as ethnicity and genetics. As a result, the conditions can affect certain ethnicities at a greater rate than others, according to Díaz-Bonilla.

Obesity disproportionately affects women in Latin America and the Caribbean compared to other regions, according to Biermayr-Jenzano, who is affiliated with the Latin America, environmental studies and women’s studies departments at Georgetown.

“The rise of this condition has gender implications, disproportionately affecting women in more than 20 countries in the region,” Biermayr-Jenzano said. “The rate of female obesity is 10 percent higher than for men, pointing to the gender divide, as we call it.”

“I have seen women in Latin America being 80 percent of those who sell food on the streets. They are like the entry point to offer good options instead of foods high in sugar, or fried,” Biermayr-Jenzano said. “If we have these people offering these options [be] more educated with certifications, we can improve a lot of the food offerings.”

“The numbers speak for themselves,” Caporaso said. “58 percent of people in Latin America are overweight. If we don’t do serious work and fast, this problem is going to increase seriously.”

“There are several countries in Latin America that have developed policies already, so the objective is to evaluate their effectiveness and the challenges,” Caporaso said.