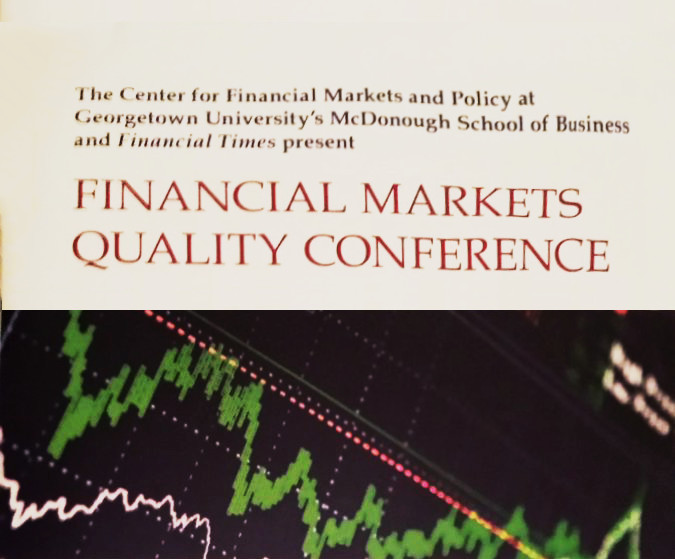 Regulators must adapt to new financial technologies, federal experts said during a panel segment of the annual “Financial Markets Quality” conference co-hosted Wednesday by the McDonough School of Business’ Center for Financial Markets and Policy and the Financial Times.

About 60 people attended the segment, titled “The Regulatory Policy Environment,” which was held around the middle of the all-day conference in the Lohrfink Auditorium, located within the Rafik B. Hariri building.

Nicole Bullock, a reporter for the Financial Times, moderated the panel.

Giancarlo expressed the sense that the digital age has fundamentally altered the modern market space and has forced regulators to react to the ground shifting beneath their feet.

“Digitization has transformed everything we do,” Giancarlo said. “We need to think about what are the principles behind some of these rules [for modern digital markets] and how do we apply that to the virtual world, the virtual training and digitization? We have to catch up to this transformation.”

“I think that the first thing we need to do is embrace [digitization],” Giancarlo said. “We need to embrace it not only because market participants are using it, but because it presents opportunities for our regulators to do a better job.”

Langevoort said that in a time of intense innovation in financial markets, regulators must keep pace with invention in order to ensure market safety.

“Anytime you let innovation run ahead, what you are essentially saying is that enforcement is going to have to do a lot of clean up work,” Langevoort said. “Once the innovators can occupy spaces, and sink costs and sink structures, if the regulators [are] not very close behind, you are going to get bad things.”

The discussion also focused on the subject of over-regulation negatively affecting markets. Panelists mentioned the Dodd-Frank Wall Street Reform and Consumer Protection Act — legislation signed by President Barack Obama in 2010 in response to the financial crisis of 2008.

According to the White House website, key provisions of the 2010 law included ending bank bailout practices in the event of failure, separating proprietary trading from banking and creating new federal agencies to monitor banking practices. The White House has deemed the law “the most far reaching Wall Street reform in history.”

Contending against the positivity attributed to the law from the White House’s perspective, Giancarlo said that one unintended consequence of the system-altering legislation was the increase of “flash crashes” — which The Economic Times describes as sudden falls in stock prices.

“I reflected on the fact since Dodd-Frank made its way through the U.S. Congress, we have had 12 major flash crash events and probably several dozen minor ones in the markets,” Giancarlo said.

Giancarlo explained that the Dodd-Frank provisions require banks to place large amounts of their capital on balance sheets, affecting the liquidity of the market. Giancarlo said that these changes in liquidity contribute to causing flash crashes.

Even with problems of over-regulation, Giancarlo said that, in general, a marketplace can be compared to a highway and that regulators, like traffic cops, need technology to monitor aptly the financial environment and to enforce accepted standards of safety.

“A highway in a sense is a market place — a market place where people are going different directions, getting on, getting off,” Giancarlo said. “There are 30 year old cars driving, and there is the latest model, and they are all using the same highway … but interestingly the police never have all the technology. They need to be able to follow a Ferrari, a Lamborghini.”

Spencer Mindlin (GRD’17) said the event was particularly helpful for students, because it gave them a comprehensive look at contemporary issues in finance directly from industry leaders.

“Flying at the level that the conference flies at, it gives folks that might not be as familiar with the day-to-day issues a high-level purview, and then also kind of down in some of the weeds in what are some of the top issues of the day, and perhaps a teaser for students that are interested to go learn more about what is the current environment for financial markets all about and what are the issues that are currently dealt with,” Mindlin said.