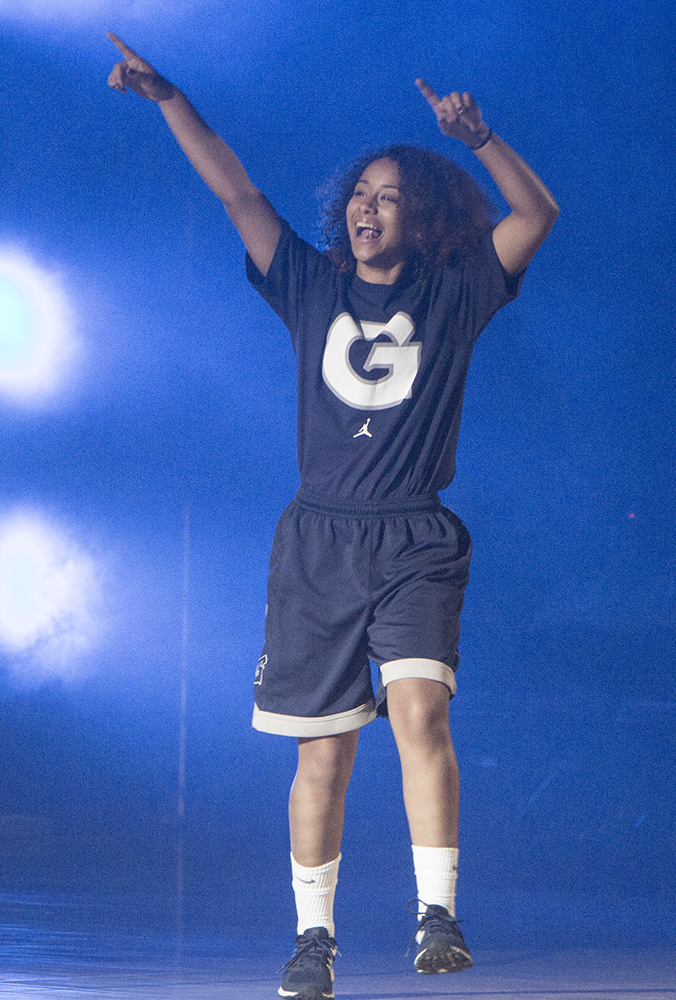 The addition of five freshmen to the roster of the Georgetown women’s basketball team has provided an additional jolt of youth to an already young roster. On a team that will feature no seniors, the freshmen will all have chances to contribute early as first-year Head Coach Natasha Adair feels out the roster.

Center Yazmine Belk and guards Dorothy Adomako, DiDi Burton, Chenya Sealey and Justyce Swango all provide skill sets that allow them to play various roles around the court. Despite significant turnover from last year, the freshmen, who make up more than a third of the roster, are not expected to directly fill shoes, instead partaking in a group style of play.

“The good thing with us this season [is that] we talk about everything by committee. We don’t have top-heavy, we don’t have bottom-heavy,” Adair said. “Everyone’s going to have an opportunity to be an option.”

With the unusual selection of Swango, a freshman, as one of the team’s three captains, along with sophomore Tyshell King and junior Katie McCormick, the youth of the team is clearly thought of as a strength. Swango, who is expected to contribute at point guard, impressed Adair with her energy on and off the court; as a result, all three years of players are represented in captainships.

While she was originally recruited to play at the College of Charleston, where Adair was then head coach, Swango made the transition to Georgetown after Adair’s return to the Hilltop. Standing at just 5 feet 5 inches, the freshman comes to Georgetown on the heels of a highly successful high school career at Princess Anne High School, featuring four straight trips to the Virginia State Group AAA Championship game. The diminutive guard averaged 12.5 points, 5.5 assists and 5.0 steals per game as a senior, leading her school to the second state championship of her career.

“I’m very humbled,” Swango said of her leadership position. “I just take it as a[n] opportunity to just keep growing.”

Belk, from Nazareth Regional High School in Queens, N.Y.,  is Georgetown’s only listed center on the roster. As the 16th-ranked recruit in the nation in the ESPN 2014 rankings at her position, she should have the opportunity to make an important impact with her size and versatility. At 6 feet 3 inches, Belk is the tallest player on the team, but her style of play is not purely oriented toward the low post.

“[Belk’s] not going to be a typical post player,” Nazareth Head Coach Ron Kelley said. “She can shoot the ball very well, long range and mid-range. She’s a pretty versatile big kid, she can dribble the ball, she can score underneath the basket, so I think and I hope that she’s going to show those skills at the collegiate level like she did in high school.”

After a year anchored by the play of a dominant, post-up center in Natalie Butler, who has since transferred to national preseason No. 1 Connecticut, Belk will provide something of a change of pace. But for Adair, change is exactly what should be expected.

Belk, like Swango, was attracted to the Hilltop by the coaching staff, coming to Georgetown after a change in the Virginia Commonwealth coaching staff that allowed her to relinquish her commitment to the Rams. According to Kelley, Belk was always interested in the Georgetown campus and took the opportunity to be a part of a young team with a promising staff.

Chenya Sealey, a point guard in her high school years, comes to Georgetown from Bartow, Fla. A McDonalds All-American nominee, she will add to the Hoya backcourt depth and will provide scoring ability and versatility in that area.

While Sealey comes to Georgetown with a lot of hype, perhaps the freshman with the greatest upside is Big East Preseason Freshman of the Year Adomako. The 6-foot-1-inch guard led Virginia’s Cosby High School to a perfect 25-0 season and the Group 6A State Championship in her senior year.

Adomako and the rest of the freshmen will be tasked with replacing some of the production from Butler, graduated senior forward Andrea White and once-promising freshman guard Shayla Cooper, who transferred to Ohio State after only featuring for Georgetown twice last year. Butler and White alone combined for nearly half of the Hoyas’ scoring last year. If any group of players is up to this tall task, it is this group of confident, energetic freshmen.

Three of the freshmen, Swango, Burton and Adamonko, come from the Virginia-Maryland area, and Swango and Adamanko played together on their travelling club AAU team.

Burton came to the Hilltop from Baltimore City College High School. She uses her 5-foot 5-inch frame to her advantage on offense and defense, as she tallied high steal totals to complement her scoring throughout her high school career.

The trio of freshmen guards brings some homegrown talent and excitement to the team. As the squad coalesces, an emphasis on energy and passion has taken root under Adair’s guidance.

“From day one they’ve been receptive, they’re all sponges to what we want to do,” Adair said. “So I can’t put a hat on one particular player on who’s going to excel because I see greatness in them all and it’s different every day.”

The freshmen stressed that their integration into the team has been smooth, and that they are excited for the opportunity to contribute to the program.

“We take up a big part of the family so we probably take on more responsibility per se,” Burton said. “But we all have to contribute as a team to get that one goal — and that’s to win the Big East championship.”