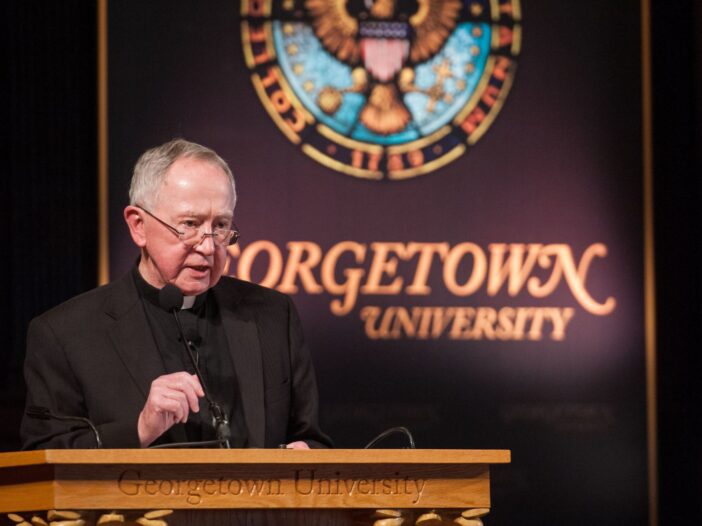 A beloved teacher for 67 years, O’Malley was a leader in the Jesuit community and was considered the dean of Catholic historians. A renowned expert on early modern European history and the Roman Catholic Church’s Second Vatican Council, he joined the Georgetown community in 2006 as a professor in the department of theology and religious studies, and taught his last class in Spring 2020. O’Malley died following a brief illness at the Colombiere Jesuit Community in Baltimore, Md.

Born on June 11, 1927, in Tiltonsville, Ohio, O’Malley began his career in the Catholic Church when he entered the Jesuit order in 1946. He studied Latin for a semester at John Carroll University and then spent three years studying philosophy at West Baden College before going on to earn a Ph.D. in history at Harvard University in 1966.

O’Malley contributed to 150 academic essays and authored 29 books on the Catholic Church and the Society of Jesus including “The First Jesuits” (1993), which won two best-book prizes and is now published in 12 languages, according to an email sent from Georgetown Jesuit Superior Rev. Ron Anton, S.J., to the Georgetown community Sep. 11 announcing O’Malley’s passing.

“Fr. O’Malley was a beloved member of the Georgetown community, a devoted pastor and a trusted mentor, advisor and friend to students, colleagues and Jesuits around the world,” Anton wrote.

Jonathan Marrow (COL ’18), who took O’Malley’s course “Two Councils: Trent and Vatican II” in 2017, said he was a life-changing professor whose intellectual ability encouraged his students to expand their curiosity about history.

“What he did in the classroom — intellectually and personally — was unforgettable,” Marrow wrote to The Hoya. “He was able to take events that occurred five centuries ago and use them to prompt vibrant discussions about questions of faith, history, institutional change, and cultural practice.”

Rev. David Collins, S.J., director of Georgetown’s Catholic studies program and a close friend of O’Malley’s, said O’Malley was a kind person who was highly regarded as a scholar and mentor within the Jesuit community.

“He’s internationally the single most influential church historian of his generation, bar none, so that’s one side of him,” Collins told The Hoya. “And the other side is he was unrelentingly cheerful and encouraging, and that was part of why he was just fun to be around and in general enjoyable to be around.”

O’Malley served as an educator and historian throughout his life. O’Malley did not join the Society of Jesus to become a priest, but rather to continue the order’s work in education.

“John — in his life and in his scholarship — captured the fullness of the Ignatian tradition that has been passed down to us from St. Ignatius and the first Jesuits,” DeGioia wrote to The Hoya. “His prolific writings contributed important insights about Jesuit and Church history, and because of his work, we have a deeper capacity to engage in the richness of the Ignatian tradition.”

Collins said O’Malley’s personality and character seeped into the mentorship he provided for students and others, including Collins himself.

“John was one of these people that people flocked to him,” Collins said. “He was happy to be consulted and had very good advice for their own scholarly work, and that sort of inexhaustible cheerfulness.”

Marrow, who is now a middle and high school history teacher, said O’Malley’s guidance played an important role in his decision to pursue a career in education.

O’Malley published five books after arriving at Georgetown. In 2016, he received the Centennial Medal, the highest honor from Harvard University’s Graduate School of Arts and Science, for his work as a historian.

Despite not knowing him personally before arriving at Georgetown, Director of Campus Ministry Rev. Gregory Schenden, S.J., said O’Malley made him feel welcomed when he arrived in 2014.

“While I was nervous about living in community with such a scholar & presence, John immediately disarmed any such notions,” Schenden wrote to The Hoya. “His warmth & humor aided me in feeling at home & assisted in my sense of belonging at Georgetown.”

Even in casual conversations with O’Malley, his scholarliness and curiosity was exemplified, Schenden said.

“From Jesuit history to baroque art to cinema, John’s intellectual capacity was astounding. However, I maintain what was most unique about John was his rare combination of intellectual prowess & incredible kindness to all — his colleagues, his students, his Jesuit brothers,” Schenden wrote.

O’Malley maintained his curiosity and drive to educate himself through his entire life until his death, Schenden said.

“John never lost the wonder & awe of a young student,” Schenden wrote. “He lived his life as a perpetual student, which is what made him such an engaging, remarkable academic & teacher.”

O’Malley’s funeral will be held Sept. 17 at Holy Trinity Church in Georgetown, followed by a procession to the Jesuit Cemetery on campus for his burial. A reception will be held at Wolfington Hall to follow.

DeGioia expressed that O’Malley was a valuable mentor and advisor to students whose loss impacts both members of the Georgetown community and Jesuits worldwide.

“It was an honor for us to have his presence on our campus for 16 years and to have his faith and his scholarship as a resource in our community,” DeGioia wrote. “As a friend and colleague, I will miss him greatly.”