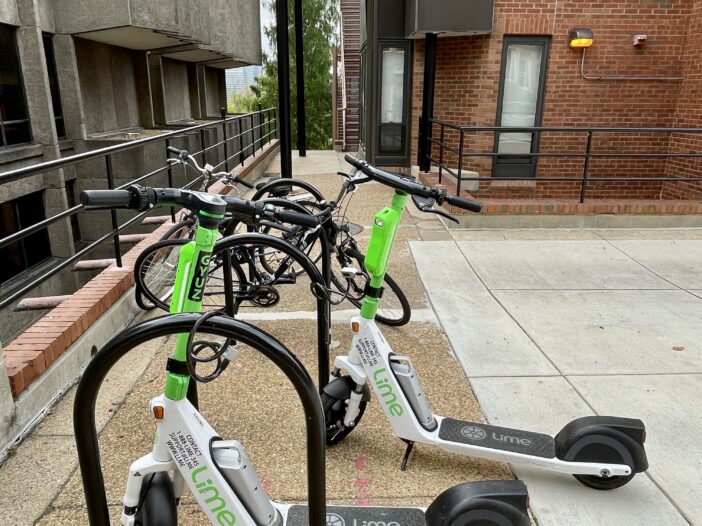 New Washington, D.C. legislation requires all riders to lock up rentable scooters after using them, prompting rider concerns about convenience and a lack of bike rack space.

The Council of the District of Columbia began requiring riders to lock rentable scooters to bike racks, scooter corrals, stop signs and parking signs starting Oct. 1. Scooters cannot be locked to private fences, gates, trees, bus stops or any other objects not authorized in the District Department of Transportation’s guidelines.

The new law aims to keep D.C. streets clear and accessible by preventing electric scooters from littering the sidewalks, according to a Sept. 27 press release.

“By requiring these shared fleet vehicles be locked to certain infrastructure, and making more of that infrastructure available, we are keeping our sidewalks and public places open and free from obstruction for all to enjoy,” Interim Director of the District Department of Transportation Everett Lott said.

The new rule could become inconvenient if a bike rack is not in close proximity, according to Ryan Montgomery (MSB ’25), who uses electric scooters at least three times per week.

“I’ve only used it one time since I’ve had to use the lock, and there happened to be a bike rack right by where I stopped,” Montgomery said in an interview with The Hoya. “However, I could definitely see that as an inconvenience.”

There are multiple electric scooter companies that service the District, including Lime, Helbiz and Bird, all of which are working to ensure that customers can lock and unlock the scooter through each company’s app.

According to Montgomery, however, companies like Helbiz have not properly communicated how to lock rentable scooters in compliance with the city’s new rules.

“It’s not that having to lock the scooter up is frustrating, it is that Helbiz’s app doesn’t tell you to unless you have the most recent update,” Montgomery said. “I only figured this out after waiting on hold for 10 minutes with customer relations while my ride time was still going on.”

The D.C. Council passed a bill in October 2020 requiring electric scooters to be secured and locked beginning in October 2021 in an effort to keep sidewalks clear for everyone, including individuals who rely on wheelchairs or canes.

According to an Oct. 1 press statement from Helbiz, the locking system, which has been integrated into the existing app, will be user-friendly.

“The lock-to mechanism will be integrated into Helbiz e-scooters, designed to secure parked devices to bicycle racks, signposts or other infrastructure throughout the city,” the press statement reads. “Once each ride is completed, the Helbiz App will activate lock-to and ask users to take a photo of the device to confirm it was parked and locked properly.”

Despite assurance from electric scooter companies and the District that this regulation will not inconvenience riders, some riders have reported user issues in the days following the new rule, including concerns that locking scooters to bike racks may take away space on the racks needed for those using bikes or mobility devices. The October 2020 bill, however, required the Department of Transportation install 200 new racks every year until 2025 to create more space for electronic mobility devices like scooters.

The new law most likely will not inhibit ridership so long as D.C. provides enough infrastructure for riders to park and lock the electric scooters correctly, according to a Lime spokesperson.

“We expect this to have minimal impact for riders but we do hope the District will take the opportunity in this moment to expand parking locations like bike racks and parking corrals,” the Lime spokesperson wrote in an email to The Hoya. “Lock-to works when the infrastructure to support it is there, and we look forward to working with the District to continue building safe streets and micromobility parking infrastructure.”

Now that the law has taken effect, there will be negative consequences if riders do not abide by the new regulations, so it is in users’ best interest to follow the rules, according to an email Lime sent to its users Sept. 28.