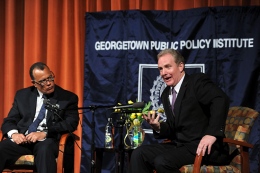 Leslie Whittington was serving as associate dean of the Georgetown Public Policy Institute in 2001 when she, her husband and their two young daughters were killed in the attack on the Pentagon.

“Last night, when I learned about the death of Osama bin Laden, I reflected upon the fact that I would be speaking here at the [Leslie Whittington Memorial Lecture Series] today,” said Rep. Chris Van Hollen (D-Md.), the featured lecturer at the Gonda Theater Monday afternoon. “I thought how fitting it is to be gathered here in her memory and in memory of all the others who were victims of terrorist attacks on 9/11.”

While he was billed to speak on the contentious federal budget negotiations, Van Hollen (L ’90) began his remarks by acknowledging the extraordinary symbolism of the occasion.

Van Hollen hailed bin Laden’s killing, which came after an exhaustive 10-year search, as a momentous victory in the war effort.

“While the fight against al-Qaeda will go on, and we have to remain vigilant, the fact is that they’ve lost their founder and leader,” Van Hollen said. “It was a good day for America and everyone throughout the world who works for freedom, for justice and for peace.”

Van Hollen serves as the ranking member of the House Budget Committee and has played a key role in negotiations. He is one of a dozen members of Congress who will appear Thursday at a critical bipartisan budget meeting hosted by Vice President Biden.

After turning to the planned subject of his talk, Van Hollen highlighted to the crowd of about 150 people the distinctions between the House Republicans’ budget proposal, throwing his support behind the president.

“The House Republican plan clearly is the wrong choice for the country,” Van Hollen told the Georgetown gathering. “It will not advance the goal of making sure that students in this room have a brighter future, and it will not ensure that generations after you have brighter futures.”

In his speech, Van Hollen outlined a three-part test for evaluating a federal budget. First, he stated that it must make the necessary investments to keep the United States competitive globally. Second, it must ensure that “every American can live with some measure of basic decency and security.” Third, Van Hollen said emphatically, as a budget, it must be sustainable.

Van Hollen quoted Federal Reserve Chairman Ben Bernanke, who said that failure by the United States to pay back debts could result in economic catastrophe.

“This is not the time to play politics,” Van Hollen said.