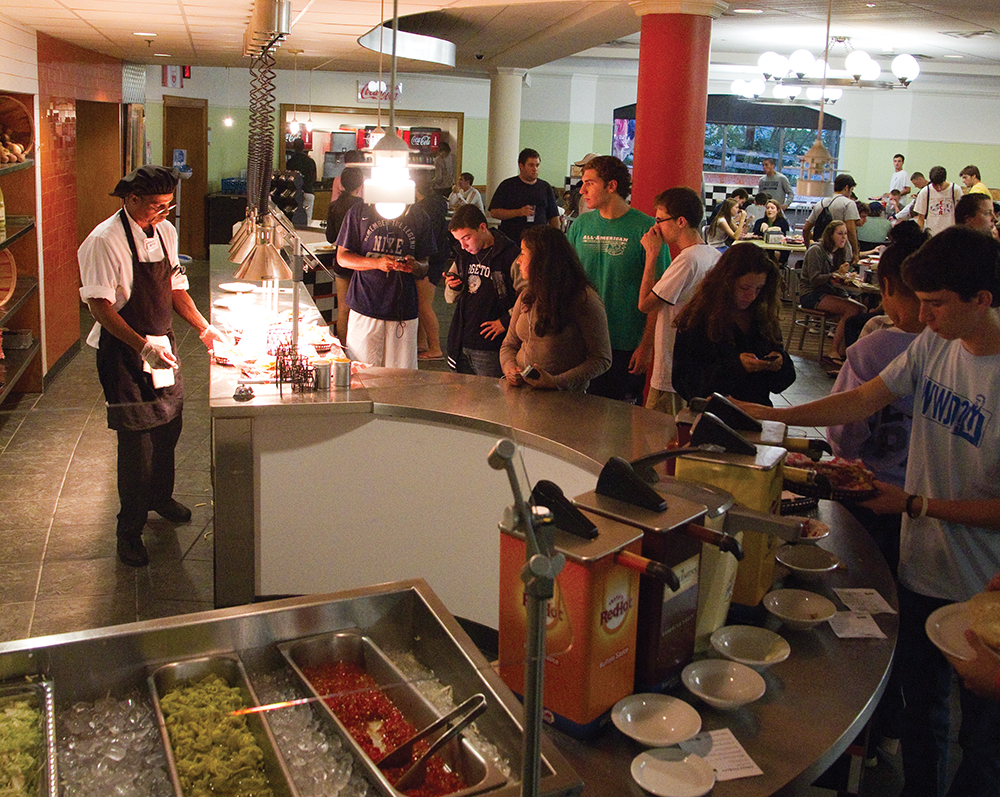 The university is considering implementing a third-year meal plan requirement, according to a press release issued by the Georgetown University Student Association on Wednesday. The announcement was met with dissent from many students, leading to an IdeaScale petition against the plan that had amassed over 450 student signatures by press time.

GUSA President Trevor Tezel (SFS ’15) and Vice President Omika Jikaria (SFS ’15) said that administrators informed them of the proposal at the end of September.

GUSA’s press release outlined Tezel and Jikaria’s disapproval of the plan, which they said would add to pre-existing problems at O’Donovan Hall, including overcrowding, lack of accommodations for kosher and gluten-free students and problems with adhering to the Title IX non-contact directives.

“I wouldn’t view any of these particular angles to the issue in isolation,” Tezel said. “I think what it instead shows is that this is a policy change that doesn’t just hurt one aspect of student life. This is multi-dimensional.”

Under Title IX, universities must be able to make accommodations to prevent accused students from making contact with survivors of sexual harassment or sexual assault.

According to Tezel, the proposed plan also raises concerns about increased tuition and the effects on students with demonstrated financial need. Currently, the least expensive meal plan option is the 60-meal block plan, which costs $885, including $60 in Flex dollars, per semester.

“Even if we are talking about full Flex dollar plans for juniors, that’s still a tuition increase, because you are forcing them to frequent a certain set of businesses that might be out of that student’s budget,” Tezel said.

Associate Vice President of Auxiliary Services Joelle Wiese declined to comment on why the university is considering this plan, but said that the university will engage students as it makes its future decisions.

Tezel said that he believes the university is considering a three-year meal plan mandate in order to increase profits due to losses from construction projects and to encourage students to spend more time on campus.

“The most apparent one is the need need for additional revenue. I think what this says for the administration is that we are on a tight budget because we are spending a lot on projects in order to comply with our latest campus plan,” Tezel said. “I also think, to that same end, it shows an interest in promoting the ideals of the 2010 Campus Plan, of focusing more on getting students back on campus.”

The university announced in the spring that students will be required to live in on-campus housing for three years, beginning with the Class of 2017. Previously, students were obligated to live on campus for two years.

According to Wiese, the administration is discussing a variety of options and taking student opinion into account. Wiese cited the Bulldog Tavern, Hoya Court renovations and Einstein Bros Bagels meal exchange program as examples of administrators and students working in tandem to develop meal options in the past.

“We know the dining experience is a central component of student life,” Wiese wrote in an email. “In the coming weeks, we will be holding forums, food committee meetings and other discussions to ensure students have a role in addressing changing food needs on campus as we build a more vibrant living and learning community on our historic campus.”

Tezel said that he has noticed an improvement in student-administrator communication, but that this situation will test the newly formed relationship.

“The relationship between Auxiliary Services and students has improved from where it was a few years ago,” Tezel said. “I don’t want to lose sight of that, but I think this is an important test to see whether or not, when push comes to shove, that feedback that those offices prioritize is really being heard.”

GUSA senator Peter Cohen (COL ’15) created an IdeaScale petition Wednesday against the proposed plan entitled “Defend Students’ Rights to Choose How to Eat.” Cohen attributes the number of student signatures to the universal disapproval of the plan.

“I hope that we stop this proposal in its tracks,” Cohen said. “This is concrete proof of already a self-evident fact that the student body doesn’t want this, that people are already pretty unsatisfied with Leo’s and loathe the idea of being forced to eat there as it is.”

Cohen said a three-year meal plan mandate will diminish the student experience on campus, devaluing Georgetown as a whole.

“It doesn’t personally affect my dining, but I think it absolutely still does affect me,” Cohen said. “If the university keeps suggesting such incredibly unpopular changes and if it doesn’t always seem that they’re taking the students’ best interest into account with the new campus plan and the new proposal, people are going to stop wanting to come to Georgetown.”

Matt Donovan (SFS ’17) eats at Leo’s regularly, but said that he hopes the university can find a better way to make a profit while maintaining student freedom in food choices.

“I think it’s a really lazy solution to a problem,” Donovan said. “It’s pretty obvious that Leo’s needs some sort of fix. It’s overcrowded and the food isn’t very good, but I think the administration needs to actually do their job. If Leo’s is hemorrhaging money, they need to find some sort of innovative solution rather than make the students shoulder an increased financial burden.”

Tezel said that GUSA hopes to work with Auxiliary Services in the upcoming weeks to find a solution to the potential of a third-year meal plan requirement, but also to make substantive changes to the eating experience at O’Donovan Hall.

“We see this as all part of the same conversation,” Tezel said. “What I’m hoping is that as we start to hopefully come to a resolution on a third-year meal plan requirement, that it can be done so along with new initiatives for campus dining that would improve student life.”