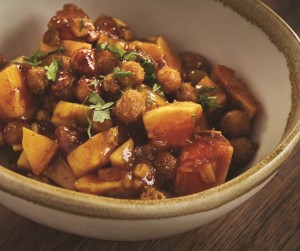 Founded by James Beard Award-winning chef Vikram Sunderam, Bindaas aims to take its diners on a tour through the streets of India one course at a time by serving Indian street food in a sophisticated manner. Located in Cleveland Park, the restaurant exemplifies the neighborhood’s ability to attract adventurous eaters and those looking for a quick trip off campus alike.

The menu offers a wide variety of flavors. The options are divided into three main sections: chaat (savory dishes), kathi roll (wraps/buns) and shashlik (kebabs). Additionally, there are options for sides of naan bread and rice pancakes as well as an extensive wine selection, with pairings suggested upon request. Despite maintaining a certain degree of flexibility in combinations, the menu may prove quite difficult to navigate for anyone without knowledge of Indian cuisine. That being said, the staff makes itself fully accessible in answering inquiries regarding ingredients or other menu requests.

The chooza kebab ($12), the lamb kathi roll ($12) and olive oil naan bread ($2.50) made for excellent entrees. The kebab featured chicken, onions and peppers smothered in a makhani sauce and laid atop a bed of saffron rice. The combination of the three flavors was uniquely savory. This dish highlighted and harmonized the three separate textures of the rice, kebab and sauce.

The second entree my party chose was the lamb kathi roll, which revealed a flavor profile with which I was unfamiliar: a combination of roast masala and fennel seed. Although the first bite was somewhat surprising, the more I familiarized myself with the dish, the better it tasted. Accompanied by a green chimichurri sauce, the lamb kathi roll ultimately succeeded in embodying typical Indian street food.
The final addition to the entree was naan bread. While naan tends to be used as a side to soak up the sauces from a main dish, Bindaas’ naan was executed to such perfection that it could have been a full dish on its own. It also served as the perfect complement to the meal and offered a break from the bold, spicy flavors of the other dishes.

The dessert menu at Bindaas is limited to three options, and I opted to try what seemed to be the most authentic of the three: kulfi, an Indian-style ice cream served in the shape of a cone covered in sweet sauces. The ice cream itself had a nice texture with subtle, refined flavors. The sweetness of the sauce was intended to complement this delicate base; however, an overpowering abundance of sugar eclipsed the milder flavor of the kulfi.

While Bindaas encourages diners to order multiple dishes to share at a table, each dish seemed capable of existing as a meal on its own. Especially with the addition of naan, it is difficult for one person to finish more than one of the main plates.

As a whole, Bindaas delivers in providing its diners with a take on Indian street cuisine. While certain flavor profiles may be distinct and unfamiliar at first, the dishes provided a unique balance of flavors and textures.