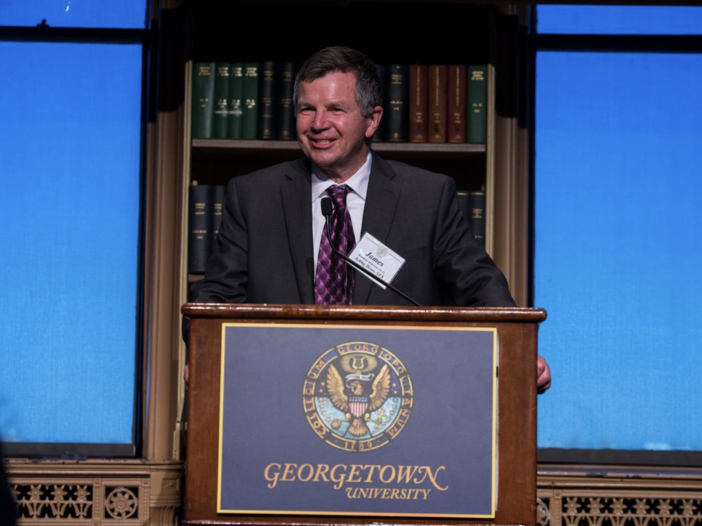 James Reardon-Anderson, a longtime professor of history and the founding dean of the Georgetown University Walsh School of Foreign Service (SFS) in Doha, Qatar (GU-Q), died Nov. 27. He was 78.

Before spearheading the establishment of GU-Q from 2005 to 2009, Reardon-Anderson served as chair of the SFS faculty council, director of the Asian Studies program, interim dean and senior associate dean of the main-campus SFS and director of the Georgetown University Master of Science in Foreign Service (MSFS) program. Reardon-Anderson returned to GU-Q to serve again as dean from July 2016–August 2017.

Reardon-Anderson was honored with the Patrick Healy Award, the highest honor bestowed by the alumni association upon individuals who are not alumni but have made significant contributions to the university, at an April 2016 ceremony in Rome.

Reardon-Anderson served as a mentor to many, including SFS Senior Associate Dean and Director of the SFS Undergraduate Program Mitch Kaneda when he first joined Georgetown as an assistant professor in 1994.

“He has affected so many students, professors, deans, especially at the Qatar campus, and he started that from scratch,” Kaneda told The Hoya. “For me personally, he guided me in my own formation from my assistant professor days until now.”

The advice Reardon-Anderson gave Kaneda in his early career has continued to resonate for decades, Kaneda said.

“‘Mitch, just be yourself.’ I can still hear him saying it. He must have told me that 20-plus years ago, but that still keeps on coming back at many junctures in my professional and personal life,” Kaneda said.

Department of Government Chair and SFS Professor Anthony Clark Arend (SFS ’80) worked with Reardon-Anderson when he returned to the Hilltop to serve as senior associate dean of the MSFS program while Arend was director.

Arend said Reardon-Anderson was a brilliant leader and a true supporter of the university’s mission.

“He really helped me work through a whole series of important issues as we were moving MSFS and School of Foreign Service to the next level,” Arend said in an interview with The Hoya. “He was very, very instrumental in that, very committed to the students of Georgetown. He was personally supportive of me in a number of activities I did including when I was director of MSFS, and I’ll forever be grateful for his support and his encouragement.”

SFS Dean Joel Hellman said Reardon-Anderson represented the very best of the school throughout his more than 30 years of service to the university, according to a statement posted on the SFS Instagram Nov. 30.

“To put it simply, Jim shaped the modern SFS. And in all his roles, he was deeply respected for his fairness, his essential goodness, his commitment to the people of SFS, and his unwavering dedication to the values of our school,” Hellman wrote in the statement.

Kaneda said Reardon-Anderson’s respect for students at the individual level has stuck with him throughout his career.

“He was going to every student to introduce himself personally, and that really conveyed to me who he was, and the value at this institution that we care about each and every student,” Kaneda said. “That was like an indoctrination for me that, over the years, shaped why I do this, how I continue to teach and guide the students.”

Kaneda said he distinctly remembers being present at the first-ever commencement on the Doha campus, which Reardon-Anderson played a foundational role in creating.

“When he was recognized, the applause just did not end,” Kaneda said. “It was everyone — the entire community, not just students and faculty. Staff members, security staff, dining hall staff, janitorial, everyone was there applauding for him.”

Reardon-Anderson is survived by his wife Kathleen, daughter Jane and sons Peter and William.