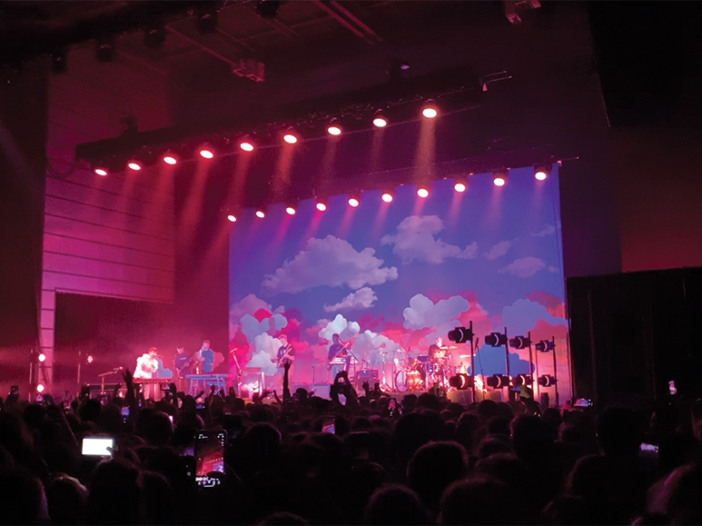 The Pony Tour began in November in the U.K. and Ireland, and this past Wednesday, Feb. 12, Rex put on an electric, sold-out performance at The Anthem in Washington, D.C., for one of the final stops on the North American leg, which concludes Feb. 27 in Atlanta.

When Rex Orange County came onstage, the energy in the room immediately intensified and set the tone for a show in which the audience was highly engaged and palpably excited, as evidenced by the Generation Z fans screaming the lyrics to every song and the mosh pit crowding the stage.

The Pony Tour’s show at The Anthem opened with a performance of the album’s first single, “10/10,” with Rex and his five-piece band set performing against a backdrop of colorfully lit clouds. After a set of lively and boisterous songs, a curtain dropped, concealing the band and the stage design, and Rex Orange County performed several songs alone without backdrop, band or frills. He rotated between multiple different instruments he was playing and seemed to sing his lyrics directly to the audience, with a resonating sense of emotional urgency.

When he finished his solo set, including a cover of Alicia Keys’ “No One,” the rest of the band returned and played another set of songs, this time with a large pony adorning the stage behind them and several disco balls on stage. This attention to detail in the production design aided in creating a captivating showcase of the rising star. Rex Orange County also took several moments throughout the performance to talk directly to the audience and thank them for their continued support of his artistry, noting how The Anthem was a larger venue than those in which he typically performs.

In the moments in which Rex addressed the crowd, the lights shone directly on the audience, reflecting the personalized nature of both the music and the performance. This sense of two-way communication was indicative of the relationship Rex Orange County has formed with his fan base, particularly through his emotionally intimate lyrics.

Throughout the performance, the lighting strongly complemented the changing tone of the performance and maintained audience engagement. Notably, at the end of the concert, Rex Orange County asked the audience to stop filming for a moment — “No phones now between the two of us,” Rex said — so that he could share a song with their full attention. This move was an uncommon and telling decision that further indicates Rex Orange County’s desire to make a strong connection with his fans and make sure that his songs are having the desired impact. When the show wrapped up after an encore, the crowd was buzzing and exhilarated, and the lines for merchandise purchases were overwhelming.

Rex Orange County’s music fills a rapidly popularizing indie pop niche that features relatable, often sad lyrics woven with high-energy pop sounds and catchy beats. In concert, these songs use colorful pyrotechnics and sharp instrumentals to come to life. The ensemble of musical instruments was comprised of nontraditional components to an indie pop performance that added impressive auditory dimensions to the show.

Part of this musical and sonic complexity likely stems from O’Connor’s extensive musical background: He grew up in England and attended a performing arts school, where he honed his skills in drumming and piano and began exploring the music production process. He also knows how to play the guitar and saxophone. In 2016, he self-released his first album, “bcos u will never b free,” on SoundCloud, a collection of 10 alternative songs that garnered significant attention and led to impressive musical collaborations such as on Tyler The Creator’s 2017 album, “Flower Boy.” His second album, “Apricot Princess,” was released in 2017, and “Pony” was released in October 2019 after two years of artistic growth and rising indie pop hype. The growth between albums is palpable, both in sound production quality and discovery of unique sound; “Pony” is a noticeably more mature and self-realized album than “bcos u will never b free.”

After the final six stops of The Pony Tour, Rex Orange County’s next steps remain to be seen, but if his performance at The Anthem is any indication, there are only good things in store for both Rex’s touching music and empowering performance style.