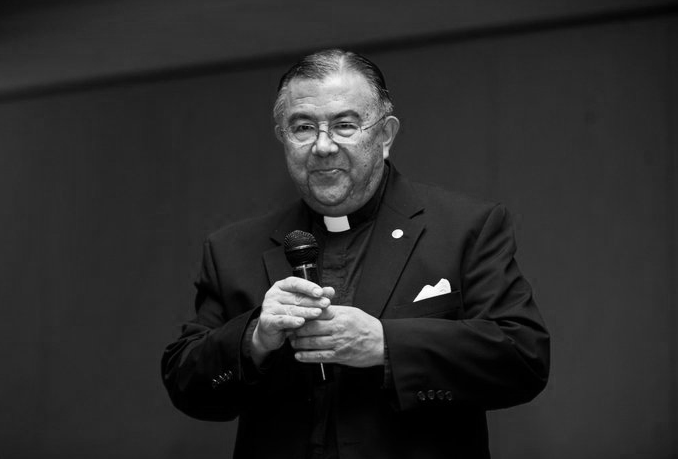 This article discusses sexual misconduct at Georgetown University. Please refer to the end of the article for on- and off-campus resources.

John had known Fr. Alvaro Ribeiro, S.J., his former English professor and chaplain-in-residence in Copley Hall, for a full semester when the alleged incidents began in December 1997. What started as an uncomfortable request for a hug turned into a series of increasingly uncomfortable episodes, including offers of alcohol and pornography and Ribeiro shaking his penis in front of John, who is referred to by a pseudonym for privacy.

After John reported the inappropriate behavior to Rev. William Byron, S.J., the rector, or head, of the Georgetown Jesuit Community in spring 1998, Ribeiro left campus for three semesters under a sabbatical leave of absence, despite being at least one semester short of qualifying, according to Georgetown University archives. Ribeiro returned to Georgetown in spring 2000, teaching English classes for freshmen and seniors until 2007. Ribeiro died in 2013.

Ribeiro resigned from Georgetown in March 2010 after an investigation into unwanted touching of students and other inappropriate behavior, according to a university spokesperson. The investigation, overseen by Georgetown’s Office of Institutional Diversity, Equity & Affirmative Action in consultation with the Maryland Province of the Society of Jesus, has not been made public until Wednesday.

“I condemn in the strongest possible terms sexual misconduct in our community and am deeply sorry for the experiences of survivors,” DeGioia wrote in a statement to The Hoya. “As a University, when responding to reports of sexual misconduct, we must hold ourselves to the highest standards in pursuing prompt and appropriate responses.”

In interviews with The Hoya, three friends and family members confirmed hearing about the misconduct from John during and after the incidents took place. Additionally, former Dean of the College Rev. Robert Lawton, S.J., who would have approved Ribeiro’s sabbatical, said he heard Ribeiro had been put under restriction sometime after the alleged incident. Lawton did not specify the details of a restriction.

A spokesperson from the Maryland Province, which oversees the university’s Jesuit Community, declined to comment on the restriction mentioned by Lawton or communication between the Jesuits and the university. The Society of Jesus takes all allegations of inappropriate conduct seriously, and its ethical policies include guidelines on behavior toward people 18 years or older, according to the spokesperson.

Georgetown has been affiliatied with 14 other clergy who were plausibly or credibly accused of sexual abuse, according to a March 2019 investigation by The Hoya. John’s account and the incidents investigated by the IDEAA are now the only publicly documented cases of clerical misconduct against Georgetown students. Ribeiro is also the first known Jesuit to engage in misconduct while serving on Georgetown’s faculty.

“I was terrified, I really was.”

The harassment started at the end of John’s sophomore fall, when Ribeiro saw him in their Copley floor common room and congratulated him on getting a good grade in his class. Ribeiro then asked for a hug.

“I was kind of a shy 19-year-old,” John said in an interview with The Hoya. “It did feel a little uncomfortable to me, but I was kind of like, ‘Ah alright, that’s cool, maybe that’s just the way he shows congratulations.’”

At the beginning of the spring semester, John ran into Ribeiro in a Copley elevator after doing laundry. Ribeiro began mentioning several poems and explained to John that they all had one common theme: penises.

A few days later, Ribeiro asked John if he would help the priest return a stereo system to the Pentagon City Mall. Despite his growing discomfort from the incidents, John felt obligated to assist Ribeiro.

At the mall, Ribeiro offered to buy John a Playboy magazine, alcohol, a suit, a sit-down dinner and to take him to a movie, all of which John declined.

The inappropriate conduct culminated a few weeks later when John, after playing basketball, walked to the Yates Field House sauna and passed Ribeiro in the locker room. After John went into the sauna alone, Ribeiro entered soon after, saw John and told him to wait. Ribeiro then returned, having changed into only a towel.

In the sauna, Ribeiro took off his towel and began to sway back and forth, shaking his penis in front of John. Ribeiro then asked John about his upcoming summer plans.

“This is not good — I have to get myself out of here,” John remembers thinking. When John attempted to evade the situation by saying he had to study for upcoming exams, he remembers Ribeiro telling him, “Hey, you should shower now” — something John feared was an invitation to shower with him.

Erika Summers (COL ’01), a friend of John’s at the time, told The Hoya she remembers John mentioning a priest engaging in inappropriate conduct. John’s older brother, who also knew Ribeiro, recalls his brother explaining the incidents at the sauna and the mall. Rasheen Carbin (SFS ’98), another friend of John, recalls John in 2014 describing multiple incidents of misconduct by a priest.

John, who is now 41 and works in marketing, was initially reluctant to report the conduct to authorities. He was convinced to report the episodes to Byron in spring 1998 by his brother and Fr. Wayne Knoll, S.J., his brother’s professor who died in 2013.

Byron declined to respond to a request for comment by The Hoya, explaining he could not discuss a misconduct allegation against Ribeiro because of confidentiality agreements between rectors and the Jesuit community.

John was skeptical of reporting the episodes in part because he feared the consequences, but decided to come forward as a way to protect those in the future whom Ribeiro might harass.

“[Georgetown] was the only school I had wanted to go to, and now I’m a sophomore and I don’t know what the repercussions of me coming forward for something like this would be,” John said. “I wasn’t necessarily swayed by the advances, but perhaps someone else would be — perhaps someone else could be put in a more vulnerable situation.”

After John reported the inappropriate episodes to Byron, Ribeiro left as his floor’s chaplain-in-residence, according to John. Soon after, John remembers hearing Ribeiro would be put on leave of absence. John also remembers being told Ribeiro was undergoing treatment, although the type and purpose of treatment was never specified. There is no publicized documentation of Ribeiro’s treatment.

While Ribeiro became a chaplain-in-residence soon after joining the university in 1992, annual directory records show Ribeiro no longer served as chaplain-in-residence after 1999. Class schedules indicate that Ribeiro returned to teaching classes in spring 2000 after a three-semester hiatus.

While university and Jesuit records state Ribeiro was on sabbatical during the semesters away, Ribeiro was short at least one semester of fulfilling the 12-semester teaching requirement for a sabbatical of one year or less, according to the 1999 faculty handbook.

Departures from the requirements were not normal but could occur in exceptional circumstances, such as promising academic opportunities, according to Lawton, who was the dean of the College from 1989 to 1999. Lawton could not recall Ribeiro’s 1999 sabbatical.

After his three-semester leave, Ribeiro continued to teach English classes until 2007, including an advanced senior seminar during which he took a few students to London for a literary prize award ceremony.

“I was not informed”: Accountability

The 2010 investigation by IDEAA, which compiled information from both the Maryland Province and Georgetown, found that Ribeiro had violated codes of conduct, according to a university spokesperson.

“[The investigation] found that Fr. Ribeiro had engaged in inappropriate conduct towards students, including failing to abide by professional boundaries and the unwanted touching of students’ posteriors while clothed, in violation of Maryland Province and Georgetown rules,” a university spokesperson wrote in an email to The Hoya.

Lawton said he did not know of any allegations against Ribeiro during his tenure as dean. It was not until he left to become president of Loyola Marymount University in 1999 that Lawton heard Ribeiro had been placed under restriction. Penn Szittya, an English professor and former chair of the English department from 2005 to 2008, had also never heard of the allegation or any restrictions on Ribeiro, he wrote in an email to The Hoya.

“I was not informed of this history or of any restrictions related to Ribeiro’s conduct, either by the Administration or by any previous Chairs,” Szittya wrote. “Nor, as a full-time faculty member and colleague of Ribeiro’s during the period you describe (1998 forward), did I hear of any such restrictions.”

An accused priest leaving immediately after a report of sexual harassment reflects how the church and Jesuits have historically handled abuse, according to Patrick Wall, a former priest and current attorney who represents victims of clerical abuse.

The Society of Jesus has strengthened its policies in the last two decades by ensuring that those who abuse minors are moved out of ministry, according to a spokesperson from the Maryland Province.

“A Jesuit is always temporarily removed from ministry during the investigation into alleged abuse of a minor, regardless of the alleged victim’s current age,” the spokesperson wrote in an email to The Hoya.

While Jesuits have emphasized their response toward misconduct against minors, that outlook misses the gray areas of students who were just above the minor age at the time of the abuse, according to Wall.

The President’s Office and the Provost’s Office did not respond to The Hoya’s request for access to university records on Ribeiro.

John has periodically thought about Ribeiro’s return to campus — something that came to the surface when he visited Yates years after graduating and saw Ribeiro in the locker room.

“I saw two gentlemen being extremely friendly with each other,” John said. “When the two people turned around, it happened to be him, and what appeared to be a very young man. And I wondered if he, that young man, had experienced something like I had, if he felt any pressure. But I felt at that point that I had put the information forward and Georgetown had made the decision about what they wanted to do with him.”

If you or anyone you know would like to receive a sexual assault forensic examination or other medical care, including emergency contraception, call the Network for Victim Recovery of D.C. (202-742-1727).

To report sexual misconduct to the university, you can contact Georgetown’s Title IX coordinator (202-687-9183) or file an online report here. For more information, visit sexualassault.georgetown.edu. If you have information to share with The Hoya regarding this investigation, contact us at [email protected] or 421 Leavey Center, Georgetown University, Washington, D.C. 20057.