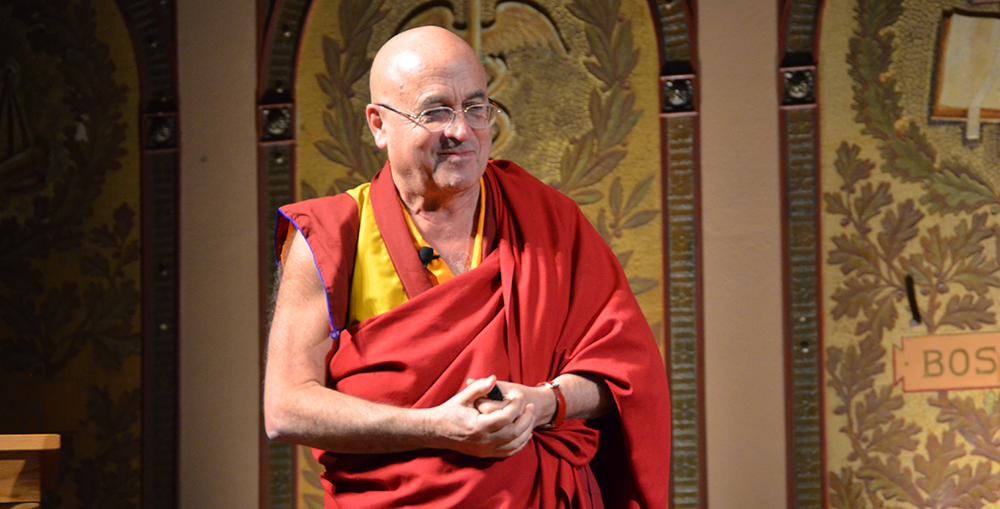 Prominent Buddhist monk, author, photographer and humanitarian Matthieu Ricard shared his insights on the importance of human happiness and altruism to an audience of more than 300 people in Gaston Hall on Monday.

The former molecular biologist turned monk visited Georgetown as part of a global promotional tour for his latest book, “Altruism: The Power of Compassion to Change Yourself and the World.”

Ricard is renowned for his 2004 TED talk on happiness and altruism that has garnered more than 7 million views. He also participates in scientific research related to contemplation and founded the charitable organization Karuna-Shechen in 2000, which is currently committed to more than 140 humanitarian projects throughout Nepal, India and Tibet.

In University President John J. DeGioia’s opening remarks, he cited a quotation — “The world is our house” — from Jerome Nadal, a 16th-century member of the Society of Jesus, and said that altruism aligns with Georgetown’s Jesuit mission.

“This idea that the world is our house asks that we embrace a way of life that is welcoming, accepting and in solidarity with all those around us,” DeGioia said. “It asks that we take responsibility for the well-being of each other.”

Ricard began by offering his personal definition of altruism.

“[In] altruism … your primary motivation is to achieve the benefit of others or to remove their suffering,” Ricard said. “So altruism basically is a state of mind, it’s a motivation and an intention. Of course, it must be followed by action as much as possible.”

Ricard also said that he believes in what he calls “the banality of goodness,” which he defined as the view that all people are essentially good and behave well toward others.

“I think that we have to recognize that if we look at the vast majority of the behavior of 7 billion human beings most of the time … we behave in benevolent, decent, kind, polite and … cooperative ways,” Ricard said.

“We are clearly facing major challenges,” Ricard said. “Here, we are at the edge of tipping points in many ways: our own life, societal life, inequalities that are growing throughout our cities and countries and the environment.”

Ricard also said that in his view, altruism is a practical solution to the problems that humanity faces in the modern world.

“The idea [of altruism] is not just a utopian, beautiful idea, but is the most pragmatic answer to challenges of our times,” Ricard said.

According to Ricard, widespread altruism could help overcome the world’s challenges by altering cultures, institutions and economies to achieve what he calls “sustainable harmony.”

“Sustainable harmony for today is [about] remediating … inequalities — [to bring about] more social justice,” Ricard said. “Sustainable harmony over time is to remain in harmony with our environment so that we continue in a sustainable way for the sake of future generations.”

Ricard said that to cause such far-reaching change, altruism must first be cultivated at the individual level through exercises such as meditation on compassion for others. According to Ricard, modern research indicates that meditation changes the structure and function of a practitioner’s brain, even to the level of gene expression, making them more amenable to compassion.

“If you cultivate the innerskill of love and compassion, definitely, you change,” Ricard said.

Ricard also said that a close-knit group of altruistic individuals could unite to change the community around them. Ricard said that this idea is based on the principle that only the smallest proportion is needed to effect change in a larger whole.

“It turns out that to reach opinion, you don’t need 90 percent of people or more than 50 to adopt an idea,” Ricard said. “If there is a strong idea with, say, 15 percent of people, who really make it the point. … Those who are undecided will shift to that and there is a change in culture.”

After Ricard’s keynote, the event included a conversation moderated by associate professor of psychology Abigail Marsh, a question-and-answer session and a book signing.

“It was a totally distinctive point of view, which took me by surprise, and as a result I know I have some re-evaluating to do,” Marshall wrote in an email to The Hoya.