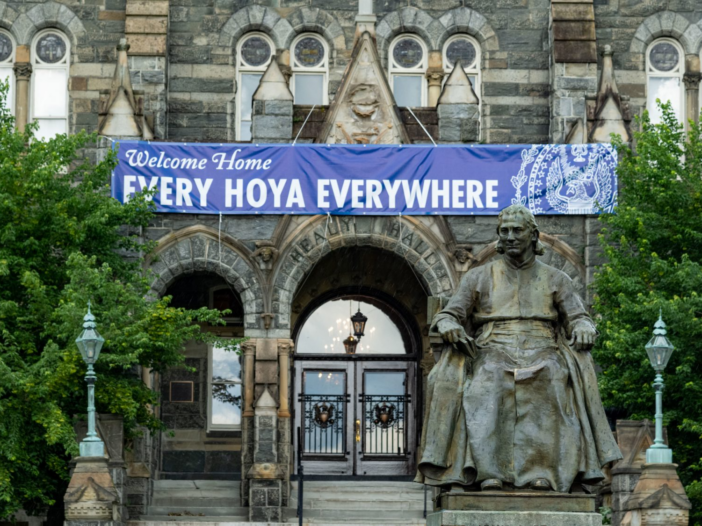 After 16 months of quiet, Georgetown University hosted hundreds of rising sophomores and transfer students for a five-week, on-campus experience this summer.

The Summer Hilltop Immersion Program, which ran from June 7 to July 9, offered rising sophomores and transfer students the opportunity to live on campus, attend in-person classes and forge new relationships following a virtual academic year due to the COVID-19 pandemic.

For Millie Welbourn (SFS ’24), who lived at home in Charleston, S.C., during the academic year, SHIP exceeded expectations after a year of anxiety surrounding making friends in the online environment.

“It’s been more fun than I expected,” Welbourn said in an interview with The Hoya. “I was kind of nervous coming here that everybody would have already made friends online from the last two semesters, so I was really surprised how easy it was to, like, meet people and get along with people.”

Welbourn said her friends left to live on campus at their respective universities in fall 2020, leaving her struggling to find community among Georgetown students online.

“All of my friends went to their colleges, so I was kind of the only one left in town,” Welbourn said. “And, I mean, you can try to make friends online, but it’s just really hard, especially to keep up with people during finals and stuff — you just can’t, you can’t keep up with people at all.”

While some undergraduates lived in need-based on-campus housing during the 2020-21 academic year, all courses were held virtually as recommended by Washington, D.C. health officials and university administrators. All undergraduates will return to campus for the fall semester as Georgetown University expects to resume on-campus housing and academics without social distancing requirements, according to a July 19 email from Provost Robert Groves.

While most classes met in person, including SHIP-specific, one-credit classes designed to promote community among students, campus and D.C., some classes were held virtually at the discretion of the instructor.

Even in virtual courses, SHIP allowed students to find new ways to connect with one another, including meeting up to attend Zoom lectures together, according to Aiai Price-Smith (COL ’24).

“Although I’m taking virtual classes, there’s still a community where we can take class together in the same room, even if it’s on Zoom,” Price-Smith said in an interview with The Hoya.

In-person instruction has made classes easier to focus and participate in, according to Welbourn.

“To actually see people reacting to what you are saying and being able to make eye contact with people, it’s crazy how much of a difference that makes,” Welbourn said. “I didn’t think that it would be that different, but it really does.”

Over 800 students enrolled in SHIP and were housed in typical first-year residential halls. All students were also required to purchase an all-access meal plan at Leo J. O’Donovan Dining Hall, the only operating dining hall on campus.

The residential aspect of SHIP allowed students to connect in ways that were not possible over Zoom, according to Price-Smith.

“Since I’m in Harbin, there’s clusters and so we run into each other in the common rooms or in the bathrooms, that type of thing, and this definitely didn’t happen on Zoom,” Price-Smith said. “It’s a lot easier going to Leo’s and running into a bunch of people and then walking back from Leo’s or anywhere also seeing people.”

For Meghan Hunt (COL ’23), who attended Trinity Washington University as a first-year and American University during the first semester of sophomore year, SHIP affirmed that Georgetown was the best fit.

“Starting at a new school for anybody is so weird to do on Zoom,” Hunt said in a phone interview with The Hoya. “I’ve transferred several times, it’s always very intimidating trying to see if this school is going to be the match for you, so SHIP definitely reassured me that Georgetown was the right place.”

Despite meeting mainly rising sophomores, Hunt said she and other transfer students were able to connect at SHIP.

“I met a few transfer students, through classes and through other people, so I definitely met a good amount of transfers,” Hunt said. “We were all able to form a small community.”

“Not many Peruvians go to Georgetown and the only Peruvian girl that was also going to Georgetown was already here, so I was basically just alone,” Llontop Calosi said in an interview with The Hoya. “I couldn’t hang out with other Georgetown students in my area so I was definitely wanting to come and meet my friends and the classmates that I met in the virtual world, but in person.”

The opportunity to acclimate to campus life before the fall semester was reassuring, according to Llontop Calosi.

“I won’t be a freshman because now I know where the buildings are, how to manage myself, and also the shock of moving from my house to Georgetown, balancing my life, social and academics,” Llontop Calosi said. “Now I won’t have to suffer through that problem in the fall because I’ve already experienced this during my first weeks here in SHIP.”