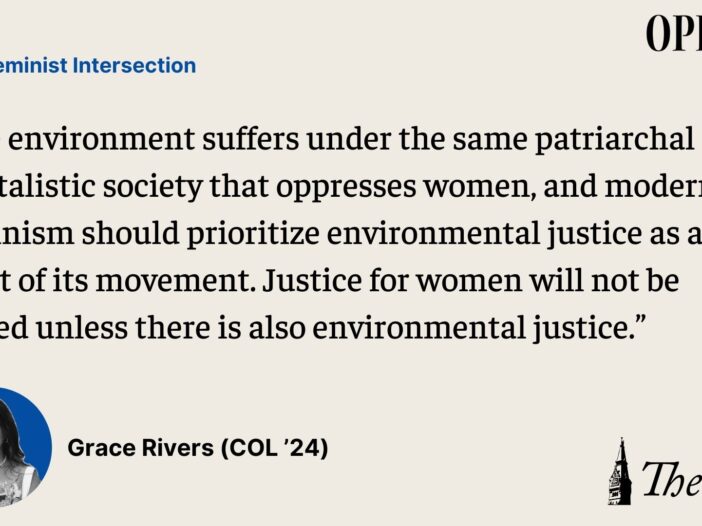 I have been vegetarian for nearly five years and have exclusively used reusable menstrual products for four. When others learn of my dedication to these environmentally friendly habits, I am often met with curiosity or confusion.

It is no secret that environmental degradation and climate change are increasingly pressing issues. According to NASA’s Jet Propulsion Laboratory, the Earth’s average surface temperature has increased approximately two degrees Fahrenheit since the late 19th century. Additionally, we are losing around 1.2 trillion tons of ice per year, and both are undeniably the result of increased carbon dioxide emissions and other human activities.

While the rapidly changing climate should already be a sufficient reason to adopt environmentally friendly practices, the disproportionate effects of climate change on women serves as further reason to commit to sustainable personal habits. My vegetarianism and use of reusable menstrual products is an act of solidarity, as women and the environment have more in common than one might initially think.

Emerging in the 1970s and 80s with a conference that sought to merge the goals of feminism and environmentalism, ecological feminism was created to examine the crucial connection between women and nature. The conference was prompted after a meltdown at Three Mile Island, the site of a nuclear power plant in central Pennsylvania. It became known as “Women and Life on Earth: A Conference on Eco-Feminism in the Eighties” and was hosted at Amherst.

Ecological feminism is an ideology and movement that views climate change and gender equality as intrisically related issues that are both tied to masculine dominance perpetuated by the patriarchy and capitalism and calls attention to the way women are disproportionately impacted by environmental issues. Therefore, it calls us to see the interrelatedness of oppression and replace our culture of domination with one of ethical care.

Under capitalist systems, corporations utilize any means to maximize their profits even if it entails destroying the environment and perpetuating unattainable beauty standards for women.

Capitalism, then, is a driving force behind air and water pollution, overconsumption of natural resources, loss of biodiversity and excessive emission of carbon dioxide. Additionally, capitalism nurtures economic inequality, leaving only a small percentage of companies responsible for 71% of global emissions.

Similarly, a Facebook executive alleged that the company intentionally promoted harmful content on its platforms and put profits over consumers. Instagram, which is owned by Facebook, exposed young girls to idealized images of bodies and faces and pro-eating disorder content, which prioritized profit at the expense of these girls’ body image and mental health. This is an example of capitalism’s role in perpetuating unattainable beauty standards for women.

Thus, both women and the environment suffer at the hands of large corporations attempting to maximize their profits under a capitalist system.

Addressing both issues simultaneously is especially important given that women are disproportionately affected by climate change. Women comprise 80% of people displaced by climate change, and they are 14 fourteen times more likely to die during natural disasters. This domination, which leaves men in power insensitive to environmental repercussions, is the same domination which seeks to keep women out of spheres of power.

Furthermore, decreasing the consumption of fast fashion would significantly diminish the exploitation women and girls face in this sector and generate environmental improvements. The fast fashion industry is the second largest consumer of water, and textile dyes are the world’s second-largest polluter of water. Fast fashion factories also take advantage of women’s already unequal status in society and trap impoverished women in environments of dangerous conditions and harassment. Therefore, decreased reliance on this industry would simultaneously better the condition of women and the environment.

Women have long stood in firmer solidarity with the environment than men. A multitude of studies have found that women make more environmentally friendly choices from recycling more to eating less meat. According to a British study, 71% of women increased their commitment to ethical living compared to only 59% of men.

It is imperative that we raise environmental consciousness and work to deconstruct patriarchal and capitalistic values of domination, capital accumulation and competition, which simultaneously oppress both women and the environment. Modern feminists have an important responsibility to acknowledge that progress for women will only occur alongside environmental justice.