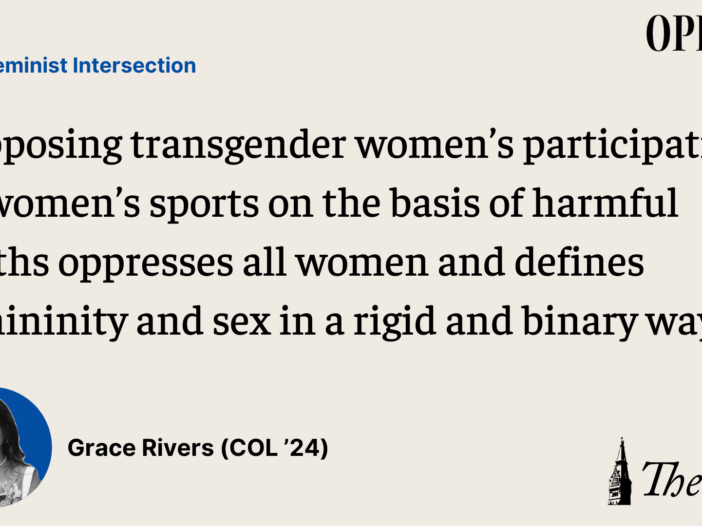 Lia Thomas, a swimmer at the University of Pennsylvania, made history as the first transgender swimmer to win a National Collegiate Athletic Association championship.

While her victory marked a momentous occasion, it also brought to light the ongoing prejudice against transgender women in women’s sports. Opponents of transgender women’s participation in sports often claim these athletes have an unfair advantage and erroneously frame them as male athletes.

However, scientific research has demonstrated that sex is not as binary as some claim. While science has established ranges of testosterone that are typically considered standard for non-transgender men and women, approximately 6 to 10% of people assigned female at birth have a condition which raises their testosterone levels above this range. Additionally, it is estimated that around 4% of the world’s population receives an intersex diagnosis, which means an individual possesses characteristics that don’t fit medical and social norms for either female or male bodies.

Defining femininity rigidly on the basis of testosterone or physiological traits opens the door for discrimination of not only transgender women, but numerous other women who fall out of the sex binary.

This binary definition also invites gender policing that could potentially subject any woman, including cisgender women, to invasive testing or accusations of being too successful at their sport or too masculine to be a “real woman.” For example, Caster Semenya, a South African middle-distance runner, was prohibited from competing in certain track events in the Olympics as a cisgender woman because of a condition that raises her testosterone levels.

These constant attempts to diminish women’s successes and achievements rest on the harmful stereotype that women are inherently inferior athletes and need protection within their sports. Protecting cisgender women has included deterring women’s participation in marathon racing and contact sports, despite sufficient evidence that women can compete and win against men.

Additionally, it is important to acknowledge that athletes of all gender identities have certain advantages over one another according to a whole host of indicators, including level of training or height, and there is no research that supports the claim that transgender athletes retain a competitive advantage over cisgender athletes. However, only transgender individuals face discrimination and scrutiny when it comes to claimed advantages.

Andraya Yearwood, a transgender student at Cromwell High School in Connecticut, suffered similar backlash as Thomas when she finished second in the 55-meter dash at the state open indoor track championships. She rightfully stated, “One high jumper could be taller and have longer legs than another, but the other could have perfect form, and then do better. One sprinter could have parents who spend so much money on personal training for their child, which in turn, could cause that child to run faster.”

Deconstructing the sex binary and stereotypes that women are inferior in sports promotes equality in sports for all women and deconstructs anti-trans discrimination.