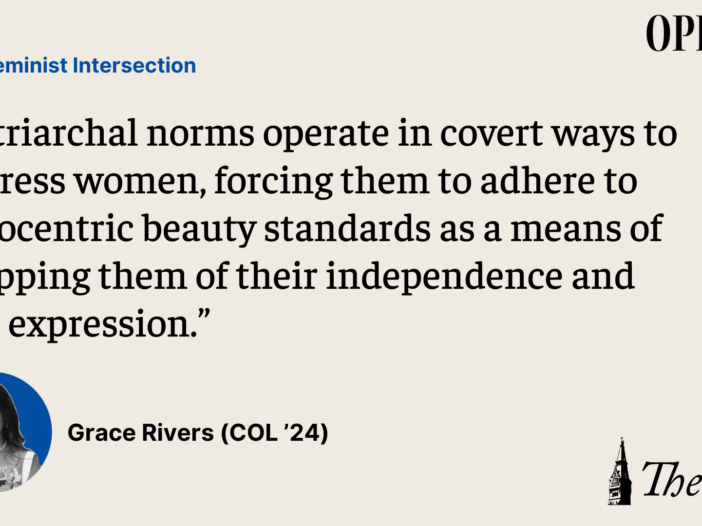 “Once on the lips, forever on the hips,” my family members would say as I reached for another scoop of ice cream after family dinner. They attempted to confine me within a beauty standard that had previously been imposed upon them from a young age.

It is no secret that this unattainable beauty standard as defined by men to fit their attractions ultimately polices women and creates unrealistic views of their bodies. These standards are typically Eurocentric and include being thin and tall, having long hair, fair skin, a small nose and high cheekbones. These confines strip women of their agency, and thus keep them out of spaces of power. Therefore, reclaiming and redefining what it means to be beautiful deconstructs the patriarchal beauty standards that oppress women and alienate minority women who fall further outside the Eurocentric norm.

The National Report on Self Esteem found that 98% of girls cited that they felt an immense pressure from external sources to look a certain way, which could include anything from their weight to where they left or removed body hair. Similarly, according to a survey conducted by the National Institute on Media and the Family, 53% of American girls at age 13 indicated they are “unhappy with their bodies,” and this number grows to around 78% by the age of 17.

I have noticed areas in which this beauty standard is continuously reinforced by family members and strangers alike. For example, there have been numerous instances on social media and in real life when my leg or armpit hair has been clearly visible, and many people have been quick to assert that it is unhygienic and gross to see unshaven hair on women. When I question why they don’t feel the same about men’s body hair, I am often met with silence. The only logical explanation is that encouraging women to shave and then shaming them when they don’t is a central example of how men impose a beauty standard on women in accordance simply with their own desires. The hypocrisy is that they feel exempt from being held to that same standard.

To appear as men do, with unshaven armpits and legs, is to threaten them and exist in the same spheres of power and influence. When the door to these spheres is opened for women, the control and ego of men who have felt entitled to these positions is challenged. Therefore, to police women back into the norm is to avoid threatening male authority in influential places. It also allows capitalism and the patriarchy to profit off of skin creams, diet programs and makeup, which women consume to achieve such a standard.

This diminishing of women’s agency through narrow beauty standards has real implications both in spheres of power, such as politics and business, and on women’s mental health.

It is estimated that eight million Americans suffer from an eating disorder, with women accounting for seven million of them, according to the South Carolina Department of Mental Health.  Psychologist Steven Hinshaw wrote that one in four girls today fall into a clinical mental health diagnosis. There is also a significant population of women who may not fit the criteria for a clinical diagnosis but engage in unhealthy and detrimental eating habits to conform to the culturally defined beauty standard.

These standards also translate into an appalling gender disparity in both private corporations and government.

Since beauty is subjective, it is important that we remain conscious of the ways we feel most beautiful, rather than focusing on what society defines as beautiful. The natural diversity of women of all shapes, sizes, races, sexualities, ethnicities and backgrounds will shine through once we all take steps to look for validation within ourselves.

Patriarchal norms operate in covert ways to oppress women, forcing them to adhere to Eurocentric beauty standards as a means of stripping them of their independence and free expression. Thus, the modern feminist movement must encourage women to redefine their beauty, which restores their confidence, power and voice.