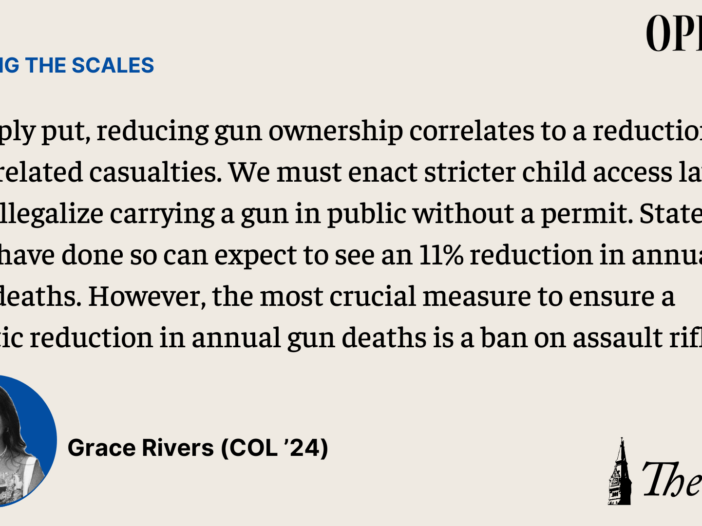 CW: This article contains references to gun violence. Please refer to the end of the article for on-campus resources.

I remember sitting at family dinner in June 2022, the news only a faint hum in the background of our lively conversation. Before long, a devastating segment on the Robb Elementary School shooting soon silenced the room. The faces of the 19 children who had been killed in the tragedy in Uvalde, Texas pierced the screen, a tangible reminder that no child in the United States is safe in the classroom while automatic rifles can be purchased at ease by civilians.

The news channel has become my daily dose of desensitization in recent years. More gun-related casualties, especially among school-aged children, occurred in the 2021-22 school year than any other school year on record, according to a federal report on school and crime safety.

This problem persists even where machine guns are prohibited, such as the District of Columbia. Gun violence is on the rise in the city and the country, and this is not a problem Georgetown students nor Americans at large can afford to ignore.

It is no secret that the United States has a significant gun problem — to which the only sustainable solution is widespread gun reform. An estimate from the Small Arms Survey, a Swiss-based research project, found that there were 390 million guns in circulation in the United States in 2018 with 120.5 firearms per 100 residents, a number that easily surpasses every other country in the world.

Thus, conservative media attempts to draw a causal link between mental illness and gun violence divert attention from the real cause of gun violence in the United States: guns. Data indicates that the higher the rate of gun ownership in a state, the higher the number of firearm-related homicides within that state. In Mississippi, for example, 50% of adults live in a household that owns a gun, and the gun death rate is 28.6 among 100,000 residents. The opposite can be observed in states with lower rates of gun ownership.

We can even look to other countries for a correlation between gun ownership and gun violence. There are an estimated 7.1 million firearms in civilian hands in Canada, an unfathomable number in comparison to the United States’ 390 million. In correlation, the rate of firearm homicides per 100,000 residents is merely 0.5 and the United States is 4.12.

Simply put, reducing gun ownership correlates to a reduction of gun-related casualties. We must enact stricter child access laws and  illegalize carrying a gun in public without a permit. States that have done so can expect to see an 11% reduction in annual gun deaths. However, the most crucial measure to ensure a drastic reduction in annual gun deaths is a ban on assault rifles, which accounted for 25% of gun casualties between 2009 and 2018. Thus, the United States could expect to see a decrease in gun-related casualties with the prohibition of these particular weapons.

With gun violence on the rise in the District, Georgetown students cannot afford to be silent on gun reform. We must vote in the midterm elections to ensure that Republicans do not secure control of Congress, which would give them the power to review, modify or overturn all legislation before it becomes D.C. law, including pre-existing gun reform laws in the District.

As the future of gun laws in our community may be at stake, Georgetown students must remain vigilant off campus and active in conversations surrounding gun reform.

With gun violence and gun-related deaths reaching all-time highs across the nation, I sincerely hope one day conservatives offer widespread gun reform rather than simply thoughts and prayers.

Grace Rivers is junior in the College. Tipping the Scales is published every three weeks.