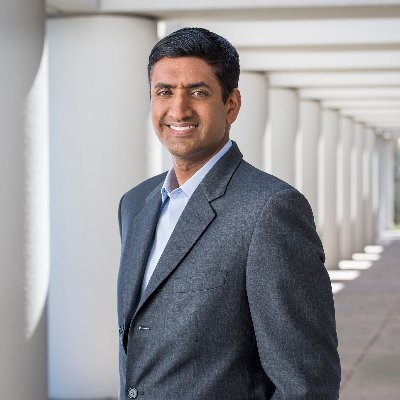 At the Nov. 16 event entitled “A Call for Economic Patriotism with Rep. Ro Khanna,” Khanna led with a statement in which he discussed his idea of economic patriotism, which involves legislation that promotes jobs for workers within the United States and also reforms social issues in the process.

Khanna said the outsourcing of labor and lack of industrial structures within the U.S. has been detrimental to workers.

“We can do this in every part of our country, and we can do it now in a way that is more achievable than ever before because of advanced technology –– the 3D printing and digital printing and manufacturing innovation and processes,” Khanna said. “It’s often cheaper and more productive and easier to make things in this country if we’re willing to make the investment.”

Khanna said the CHIPS and Science Act, a law he helped to write that invests in U.S. semiconductor manufacturing, directly benefits industries rather than simply subsidizing corporations.

“You don’t use one dollar of that money for CEO bonuses,” Khanna said. “You put that money into building new factories, in creating new jobs, in paying higher wages. While we come together in this country –– business and labor, late faith leaders and educational leaders –– we can build things and we can make things.”

The third part of Khanna’s vision is the notion that workers deserve better wages. Khanna said in 2018 he and Senator Bernie Sanders (D-VT) introduced the Stop Bad Employers by Zeroing Out Subsidies Act –– or the Stop BEZOS Act –– which seeks to tax large employers that rely on certain federal benefits for their employees.

Khanna said it is important to ensure a livable wage for America’s workers and to prevent organizations from taking advantage of the working class.

“If you’re bagging groceries, you should make enough to be able to buy groceries,” Khanna said. “If you are working for one of the richest companies in the world, you shouldn’t need to rely on food stamps. We said if you’re not going to pay a livable wage, then you need to pay the taxes for the public benefits that taxpayers are paying.”

Khanna also discussed the risk of Congress being driven by dark money.

“If we don’t stop the dark money influencing Congress, we’re going to continue to have policy driven by the big oil giants,” Khanna said. “One of the biggest amendments we need is a 28th Amendment that says ‘Stop the private money in Congress, and allow the regulation of private money in Congress.’ That’s what’s going to get rid of the big oil companies.”

Khanna said economic patriotism is also interconnected with reforms within issues such as healthcare, education, childcare and climate change.

“You want to bring jobs and manufacturing, then invest in healthcare,” Khanna said. “The arguments are far more complicated, if we really want to grow our economy, than just the mantra of tax cuts. It’s going to take far more, but I think people are ready for real solutions.”

According to Khanna, young people such as the event attendees have the power to address these social and economic issues.