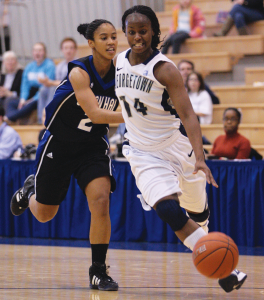 Although the Wildcats jumped to an early lead in the game, the Blue and Gray responded to take the lead themselves with eight minutes left in the first half. Georgetown was able to hold on from there and sealed the game late for the win.

The Hoyas were bolstered throughout the game by a strong defense, holding the Wildcats to a mere 54 points and forcing 19 turnovers. They also went on a few offensive runs that helped build their lead throughout the contest.

“We just went and pressured them a little bit more,” Georgetown Head Coach Terri Williams-Flournoy said of her team’s defense. “We knew we had to pressure more in the backcourt so we wouldn’t have to defend [Villanova’s] spread offense very long in the half-court.”

As is the case in most games, junior guard Sugar Rodgers paced Georgetown with 19 points. But she got much-needed help from senior point guard Rubylee Wright, who had a strong game with 12 points and four assists. Sophomore forward Andrea White posted seven rebounds, while senior forward Adria Crawford and Rodgers each had six.

The Wildcats came out of the gate strong, led by junior forward Laura Sweeney. Sweeney scored eight points in the early goings to help Villanova attain a 13-10 lead with 12 minutes left in the first half.

However, from that point on the Hoyas were able to do a good job of containing Sweeney, the Wildcats’ most prolific scorer and rebounder. Georgetown outscored Villanova 17-6 in the final 12 minutes to take a 27-19 lead going into intermission.

“We tried to trap [Sweeney] and to get the ball out of her hands,” Williams-Flournoy said.

Villanova fought back early in the second half, cutting its deficit to two points with 13 minutes left to play. However, the Blue and Gray responded with a pair of treys from Rodgers and four points from senior guard Alexa Roche to push the score to 42-32 with eight minutes to play. Overall, the Hoyas shot an impressive 50 percent from beyond the arc.

But the Wildcats would not go down without a fight. The group stayed feisty and cut the lead in the final minutes of the game, coming to within three points with 30 seconds left to play. However, clutch free throws from Rodgers and Wright put the game out of reach and sent the Hoyas out of The Pavilion with a win.

“We just had to stay disciplined in what we were doing,” Wright said of her team’s effort during the game. “We had to make a consistent effort to get out there and contest the three and push the ball in transition whenever we got the chance.”

The Hoyas return to action this Saturday when they take on Providence at home. Tipoff is scheduled for 2 p.m. at McDonough Arena.