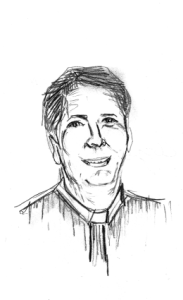 I will never forget a gift that a Jesuit brother of mine named John gave me during my first semester at Fordham University, where I studied philosophy many years ago. The gift came on a cold December morning after I had been studying all day for a final examination I was slated to take early the next morning on everything Aristotle. I had put in many hours at the library preparing for this exam, and even though I was exhausted, I had trouble falling asleep because I was so anxious.

The reasons for my anxiety were valid. The material presented to us during the course of the semester was vast, and most of the Aristotelian concepts were rather difficult for me to understand. I felt overwhelmed and incompetent, convinced that I was going to fail and embarrass myself.

After tossing and turning for hours, I finally gave up on sleep and wandered weary-eyed and angry down to the Jesuit kitchen to get a cup of tea and try my best to relax before hitting the books again. It didn’t work. My anxiety only increased and as my anxiety increased, so did my anger.

As I sat there stewing about my lot in life (and how much I hated Aristotle), John, a Jesuit Scholastic a few years ahead of me in our program came down to the kitchen to begin his day. He was the earliest riser in our house and was surprised to see me sitting at the kitchen table with brooding eyes, exuding an air of tension that could be cut with a knife. He asked me why I was up so early, and before I knew it, I was spewing forth all of my frustration and anger. Both barrels full bore!

After listening to me intently, he walked away, leaving me to stew in my own dark place. Surprisingly, though, he appeared moments later wearing his winter coat and ordered me to go get mine. When I demanded to know what he wanted me to do, he just repeated somewhat sternly, “Go get your coat.”

I still don’t know why I listened, but I did, meeting him at the door of our Jesuit residence moments later. As we stepped into the cold pre-dawn air, we were greeted by a deafening silence. “Where are we going?” I again demanded. He stopped, looked me in the eye and told me he was taking me to his favorite diner for breakfast. When I protested that I still had studying to do, he stopped me and asked me to look around.

He said: “See all those stars up in the sky? See all of these buildings filled with thousands of people? They could care less about how you do on your Aristotle exam. You have lost perspective, Patrick, and that’s why I’m taking you to breakfast. You need to see that there is life beyond this exam, this course and this program. Oh, and it’s my treat, so stop your moaning and lighten up. You’ll do just fine.” What I remember most about our shared meal was the simple laughter that we shared and how the tension in my body just melted away.

As we approach final examinations, I urge students to not lose perspective and to try to recognize that their lives are about more than one exam, one course or even an entire college career. All of these things are important, we know, but when they become the gauge by which we judge our dignity and worth, we have lost perspective and need to be reminded that even when we stumble and fall that this great thing we call community surrounds us and holds us up.

So, thank you Fr. John Gavin, S.J., who is now at the College of the Holy Cross, for helping me find perspective at a time when I really needed it. I’ve never forgotten John’s thoughtful and kind gesture to me and hope that we here on the Hilltop can show our deep care and affection for each other by encouraging each other to recognize our dignity and worth not in what we do but rather in who we are becoming.

Fr. Patrick Rogers, S.J., is the director of Catholic Campus Ministry and Main Campus Outreach. This is the final appearance of As This Jesuit Sees It ... this semester.