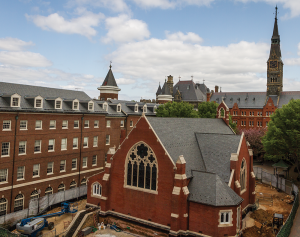 Georgetown’s Jesuit tradition always produces its annual share of storylines, but this past year was particularly transformative for the Society of Jesus with Pope Francis elevated in March to serve as the first Jesuit pontiff. On the Hilltop, the Jesuit community faced not only vandalism, departures and closures, but also reason for hope and happiness in 2013.

Departure of a Legend

Government professor Fr. James V. Schall, S.J., retired in December 2012 at the age of 85 after having taught at Georgetown since 1977. The departure of the prolific author, storied lecturer and mentor to many brought an outpouring of sentiment from the campus community.

A packed Gaston Hall witnessed the professor’s “Final Gladness,” and dozens wrote to The Hoya to express their gratitude for the Georgetown icon’s decades of service.

Schall left campus in March and moved to the Jesuit Center at Los Gatos, Calif., where he has been working on a number of projects, including two books: “Rational Pleasures,” which he began during his medical leave in spring 2010, and “Political Philosophy and Revelation: A Catholic Reading,” both of which he expects to publish in the fall. He also compiled a manuscript of essays he wrote during his time at the university called “Schall at Georgetown: On Being Liberally Educated.”

While Schall has been busy in his publishing endeavors and daily walks, he still thinks of his teaching career.

“I definitely miss the constant exhilaration and delight that I encountered each semester in meeting and getting to know new classes of students,” Schall wrote in an email. “I also miss the comfort of students who had taken two or three or more classes who got to know what I was about.”

Although Schall wrote that he was feeling relatively well, he lamented that he would not be able to attend graduation this May.

“Missing it will break my heart, but not half as much as being there,” he wrote.

As the university prepares to say goodbye to the Class of 2013, it will also bid farewell to the Woodstock Theological Center, which served the university for 40 years and will officially close June 30.

Woodstock began as a Jesuit seminary in 1869 and was located in Maryland and New York before settling in the District. The decision to shut down the center came in January but was announced until mid-February.

According to Vice President for Mission and Ministry Fr. Kevin O’Brien, S.J., one of the motives for the closing was that the center’s work overlapped with the theology department and the Berkley Center for Religion, Peace & World Affairs.

Among the other reasons cited for the closure, however, was a decline in the number of Jesuits as well as aging of those who research at the center. But O’Brien emphasized that although there are fewer Jesuits on campus — nearly 90 were at the university when he attended as an undergraduate while there are only about 50 here today — Jesuit tradition is carried on by students, faculty and staff.

“We are sharing our tradition more eloquently because we’re sharing a tradition not simply as Jesuits but as laypersons who are both Catholic and non-Catholic,” O’Brien said. “Some of the most eloquent proponents of our Jesuit and Catholic tradition are actually non-Catholics, which for me is a very edifying reality.”

As the university dealt with internal changes, however, the Catholic world was in the midst of expansion and transformation.

Georgetown has been involved in a three-year international effort with 26 other Jesuit colleges to build a Jesuit liberal arts college in Hong Kong on a 40-acre plot of land formerly used as a British military base.

Although the Hong Kong government said in 2010 that the land was available and began accepting letters of intent for land proposals in 2011, the government missed its most recent March 2013 deadline to issue a request for proposal, according to Fr. Ron Anton, S.J., chairman of the board of trustees for the college.

A new deadline has not yet been released, so the group of Jesuit institutions will remain waiting for an opportunity at the Hong Kong site.

With Francis, a Momentous First

When Pope Benedict XVI announced his resignation in February, Catholics around the world were stunned by the historical news, which was the first time a pontiff had stepped down in over six centuries.

Shortly after Benedict became pope emeritus Feb. 28, Bergoglio was selected March 15 as both the first Latin American and Jesuit pope and took the name Francis, the first name in over a millennium not used by a predecessor. University President John J. DeGioia attended Francis’ installation as part of the U.S. presidential delegation to Vatican City.

Schall worried about the problems the new pope would face.

“The main concern of Pope Francis’ tenure will be concerned with what can only be called persecution and legal discrimination against the Church,” Schall wrote. “We are little prepared for this.”

O’Brien, however, said that Francis’ actions since his election — including washing prisoners’ feet March 28 as part of Holy Thursday — show promise for the future of Catholicism.

“In the Catholic Church we have dealt with a lot of painful realities,” O’Brien said. “What he’s done is give all of us reason to hope by helping us get back to basics.”

The university’s Catholic community was struck whenDahlgren Chapel was vandalized this month, leaving a broken crucifix and organ mirror, among other damages.

“We’re continuing to work with [the Metropolitan Police Department] to see if any of the latent prints come out, but at this point and time, we’re just waiting to see,” Department of Public Safety and Chief of Police Jay Gruber said.

Gruber said that DPS had labeled the incident a hate crime due to the location and damage of the vandalism and that it would continue to be called such unless whoever committed the crime specified otherwise.

However, the university is still continuing chapel renovations and expects to have exterior work completed by graduation, while the interior work will be conducted this summer and a new organ will be installed spring 2014, according to O’Brien. The Calcagnini Contemplative Center in Bluemont, Va., is also slated to open in August and is expected to house all university-related retreats by spring of next year.