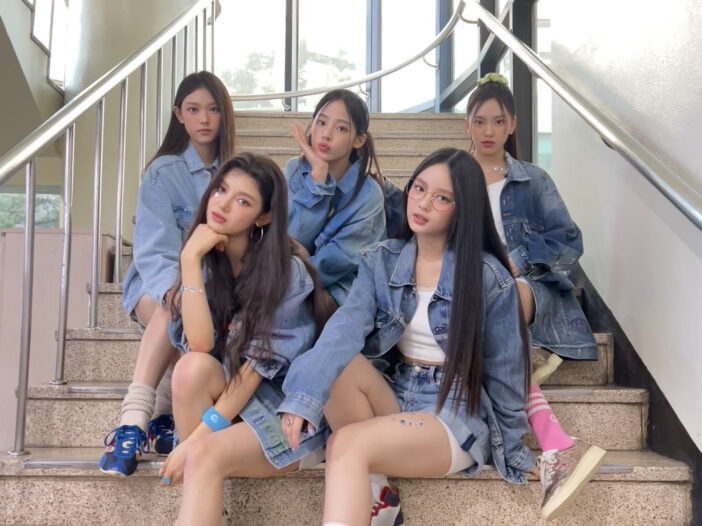 Rookie K-Pop group NewJeans adds a desperately needed creative flair to the genre in their self-titled debut EP “New Jeans,” but due to the exploitative nature of the title track “Cookie,” all bets are off.

The five-member girl group consists of Minji, Hanni, Danielle, Haerin and Hyein. The group’s line-up has turned heads among K-pop fans: for example, Hanni is the first Vietnamese idol at HYBE Entertainment. Furthermore, except for Minji, all the members are minors — with the youngest, Hyein, being 14. The group’s average age has caused controversy among fans, as it reflects a worrying trend of debuting younger and younger artists within an exploitative industry.

Nevertheless, NewJeans has continued to rise in popularity, especially after their debut single. Unlike most K-pop debuts, which slowly introduce members via social media, ADOR decided to simply drop the group’s first digital single “Attention” on YouTube on July 21. With the group’s first song, NewJeans highlighted their trendy aesthetic, sporting R&B-inspired beats and a Y2K fashion aesthetic.

In “Attention,” the members sing about wanting the attention of a crush. Immediately evocative of 2000s R&B, “Attention” opens the EP with a 30-second chanting intro, followed by smooth piano chords and twinkling wind chimes. The members’ angelic harmonies emerge during the chorus, as the previous chanting intro acts as a baseline to keep the song’s groove intact.

Watching the “Attention” music video also adds to the song’s bright ambiance. From dance scenes on a soccer field to pillow fights at a sleepover, “Attention” evokes the freshness of youth with bright hues of orange, green, purple and white.

Further adding to NewJeans’s authenticity, one of the members, Danielle, has writing credits on “Attention.” Such a credit is an impressive feat for a rookie idol, as most companies outsource lyrics and song production to renowned producers such as The Stereotypes or Adam McKinnon. Idols, on the other hand, don’t typically get a seat at the writer’s table until they have five to ten years of experience in the industry.

Similar to the themes in “Attention,” the EP’s second track, “Hype Boy,” describes the refreshing feeling of being around a crush. Percussion-filled verses and an anti-drop pre-chorus give the song a darker theme compared to “Attention.” While the chorus picks up the tempo with bursting synths and light vocals, it’s rather hollow compared to the verses and has trouble melodically meshing with the body of the song.

More sexually explicit when compared to “Attention” and “Hype Boy,” the EP’s title track, “Cookie,” depicts wanting to share “cookies” with a lover. “Cookie” provoked a scandal within the K-Pop community, as minors as young as Hyein sang lyrics ridden with sexual innuendos.

ADOR denied any sexual undertone to the song’s lyrics, stating that they collaborated with English-speaking lyricists and were unaware of a double-meaning to the word “cookie.” However, by claiming fans simply misinterpreted the word “cookie” on their own, ADOR conveniently ignores the context in which their own lyricists frame the phrase “cookie” in the song.

For example, Haerin and Danielle sing, “Looking at my cookie / Yeah, the scent alone will make you see (Taste it) / You can’t stop at one bite with me.”

Later in the chorus, Minji and Hanni sing, “No dinner, dinner, you’re hungry though / No water, water, you’re thirsty though / That’s how you like it, ain’t that right?”

Further, in the outro, Danielle sings, “Made a little cookie / Come and take a lookie / Only at my house, come over and play.”

The fact that minors sing this song is inherently sexually exploitative, even if ADOR denies any such undertones. The song, then, forces minors to sing lyrics that will inevitably be interpreted by audiences. The song can’t escape its controversy that, consequently, muddles any enjoyment of “Cookie” and the entire EP.

In the EP’s closer, “Hurt,” the members sing about leaving a relationship before getting hurt. Innovating beyond the typical ballad, “Hurt” features an a cappella base. The member’s vocals remain relatively one-note, however, making the track sound listless. While it’s a far cry from the intensity of other slow ballads such as “Hear the Sea” by Red Velvet or “YOUNG LUV” by STAYC, the song’s smooth synths are still cohesive with the rest of the EP.

While other K-Pop companies often fail at adopting Gen-Z trends with their groups (JYP Entertainment’s new girl group NMIXX is a notable example), ADOR’s artistic vision for NewJeans feels like a genuine homage to Gen-Z’s creativity. NewJeans’ EP has a cohesive, bright, Y2K-inspired theme — largely thanks to the fact that the same lyricist, Gigi, and producers, 250 and Ylva Dimberg, engineered all of the tracks.

Nonetheless, the “Cookie” lyrics and subsequent controversy sour NewJeans’ debut EP. It’s hard to deny that NewJeans brings something genuine and fresh to the K-Pop industry, but their future is unclear after this messy project.