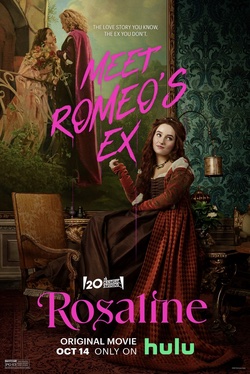 William Shakespeare has created some of the most memorable characters in literary history — from Hamlet to Iago to the Three Witches — but Karen Maine’s newest romantic comedy “Rosaline” shines a spotlight on a character who is most famous for being forgotten.

In Shakespeare’s iconic stage play “Romeo and Juliet,” Rosaline Capulet, Romeo’s jilted ex-lover, is barely mentioned before she is quickly overshadowed by the star-crossed leads.

In contrast, “Rosaline,” released via Hulu on Oct. 14, places its namesake front and center as she navigates life, love and family drama of epic proportions. With a mix of wry humor and heart, Kaitlyn Dever, the actor playing Rosaline, infuses the character with enough wit and charisma to keep the audience engaged with her story from start to finish.

The film opens with a famous scene: a lovesick Romeo Montague (Kyle Allen) calling out to his true love on a moonlit balcony. It is not Juliet Capulet he’s seeking, however, but her lesser-known cousin, Rosaline. While Rosaline and Romeo plot their moonlit rendezvous, Adrian Capulet (Bradley Whitford), Rosaline’s father, attempts to introduce his headstrong daughter to eligible suitors.

After Romeo stops responding to her letters, Rosaline tries to spend more time with Juliet in hopes of steering her away from Romeo. At first, Rosaline and Juliet seem to build an unexpected friendship, as Rosaline plays the role of an older sister, giving Juliet advice about navigating life as a woman in a patriarchal world.

However, once Juliet discovers that Rosaline and Romeo are ex-lovers, Rosaline and Juliet’s friendship takes a sharp turn for the worse. At this point, the film throws away an opportunity to portray a nuanced female friendship in favor of the exhausted cliche in which two women become rivals to win the affections of a man.

Although the two resolve their squabbles by the movie’s end, the pair’s relationship is never explored in any depth: a rare blemish on an otherwise good film.

In a departure from the original play, Rosaline orchestrates many of the story’s most important plot points. Paris — the original story’s undesirable suitor to whom Juliet is coerced into marrying — is Rosaline’s closest confidant, and it is by Rosaline’s persuasion that Paris proposes to Juliet. Additionally, Rosaline’s letter to Juliet, accidentally brought to the Montague-hating Tybalt, incites the deadly duel that results in Romeo’s exile.

With a story as well-known as “Romeo and Juliet,” the film’s placement of its heroine as the driver of familiar Shakespearean plot points offers a welcome twist that differentiates the film from other adaptations.

Subverting the play’s original plot, Rosaline’s strongest dynamic isn’t with Romeo, but with Dario, the unwanted, albeit charming, suitor thrown at her by her father. Dario gets dragged into Rosaline’s schemes throughout the film, the pair’s interactions brimming with delightfully droll banter and romantic tension. Dario helps Rosaline realize that she isn’t truly in love with Romeo, only the idea of him.

This realization leads to a sudden change of heart, and Rosaline decides to help Romeo and Juliet in their mad plot to escape the family feud. With the help of Rosaline and Dario, Romeo and Juliet are successful in their attempts to fake their deaths, a deviation from the original play. At the end of the film, the star-crossed lovers quite literally sail off into the sunset, struggling through awkward small talk as they, at last, try to get to know one another.

However, at this point in the film — when Rosaline is no longer pining after Romeo — it is unclear what goal she has left to pursue. While Rosaline claims to be helping the star-crossed lovers out of a sense of moral obligation that evolves from her actions inadvertently having led to Romeo’s exile, we don’t get a sense of her larger goals and motivations as a person.

In focusing so heavily on the exploits of Romeo and Juliet, the film neglects to explore the true aspirations of its hero, leaving the ending not as satisfying as it could have been.

While the atmosphere and set design — decorated with candlelit villas and lush boudoirs — perfectly captures the spirit of Shakespeare’s Verona, the film pokes fun at the inevitable melodrama and absurdities of the Shakespearean canon’s most delightful wit.

“Rosaline” satirizes common Shakespearean tropes for a modern audience. For example, the film scoffs at and trivializes the feud between the Montagues and Capulets. Long romantic monologues are replaced by awkward flirting and wisecracks. Romeo is reduced to a golden retriever-esque himbo. Characters mock Romeo and Juliet’s absurd instant love.

This comedic tone is underscored by modern vernacular and pop culture references sprinkled throughout the dialogue. However, Mercutio, arguably the stage play’s most interesting and humorous character, has no lines — a tragic missed opportunity.

“Rosaline” deftly balances comedy and heart. It simultaneously satirizes the tropes embodied in Shakespearean drama while still portraying an endearing hero struggling through the difficulties of love and growing up. Among the deluge of “Romeo and Juliet” adaptations that have flooded popular culture for centuries, “Rosaline” offers a refreshing new perspective on a long-overlooked character.