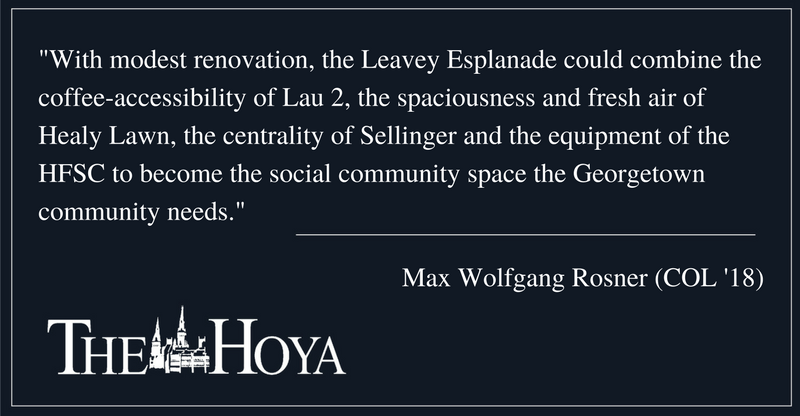 Imagine if the Leavey Esplanade had a beer garden.

Students over the age of 21 would gather outside of Uncommon Grounds for a pint while listening to live music, finally enjoying the long-awaited solution that has plagued Georgetown University students for too long — a lack of purely social space on campus.

Georgetown University has not yet addressed an issue central to student life: social space on campus. The “Report on Student Space at Georgetown University,” a landmark 2010 study conducted by the Student Space Working Group, outlined the implications of this void: “There is an appalling lack of social space for students, such that social life is fractured and prevents community building.”

The social fracture has persisted because no space has adequately filled this need since the study was conducted. The Leavey Esplanade is Georgetown’s best option to remedy this issue because of its location, size and openness; a beer garden is the best available solution for the sense of community and interpersonal connections it would develop.

With the opening of the Healey Family Student Center in 2014, catalyzed by the report, students were falsely promised a new hub for social life on campus. However, the HFSC’s design ignores a key finding of the report, which warned Georgetown about mixing work and play: “Because there is not enough of either social space or study space, the two types overlap, causing the quality of each to diminish,” the report said. By combining social space and new dining options with more study space, the HFSC has failed to address the problem of creating purely community-bonding areas.

Other “social” spaces on our campus have also failed to reach their potential because of their multipurpose design. While the second floor of Lauinger Library promises distraction from work and features a convenient coffee shop, it is, at its core, a library. Healy and Copley Lawns are spacious and inviting, but can only be appreciated during beach weather, and not without a beach blanket amid the muddied grass. And Sellinger Lounge, with its gray tables and Chick-fil-A backdrop, is more a home for paper takeout bags, meetings and study sessions than authentically social experiences.

With modest renovation, the Leavey Esplanade could combine the coffee-accessibility of Lau 2, the spaciousness and fresh air of Healy Lawn, the centrality of Sellinger and the equipment of the HFSC to become the social community space the Georgetown community needs.

The wide-open esplanade overlooks most of campus and the Rosslyn skyline; it also offers students a level of autonomy not found anywhere else on campus. Whereas the HFSC and Sellinger divvy up space between administrators and university-recognized student groups, the Leavey Esplanade is exclusively student-centered. It is there for all of us, and us only. For students 21 and over, the esplanade also has an open-container policy, meaning you can bring your own alcoholic beverages to the space.

For the past few years, the Senior Class Committee has hosted an (in)famous Dis-Orientation event — a keg fundraising party for seniors — on the esplanade. For the first time since the unity of freshman year orientation, the Class of 2018 came together as one body at the event. For a moment, the esplanade brought students together for genuine community-building across all of the social barriers that typically divide us, such as extracurricular involvements or residences.

A beer garden would bring other community-bonding experiences: an open-mic night on a spring weeknight; a casual lunch at an outdoor community table in the fall; and cornhole on weekend afternoons.

We need only two things to make this vision come alive: proper equipment and collective student buy-in. SaxaFund, Georgetown’s crowdfunding platform, is working toward making both a reality. Students should join me in donating to the SaxaFund campaign for a Leavey Esplanade Beergarden, which is raising $3,000 for six Oktoberfest-inspired beer tables, a heat lamp and a cornhole set. As the executive director of SaxaFund, I believe a beer garden with these featured items would instantly indicate itself as a social space.

Rows of blue beerhall tables would signal to students that this is primarily a social space, and heat lamps would mark this space as one meant for every month of the year. Just like the Kennedy Resident Hall Office safeguards the volleyballs used in the Southwest Quad volleyball court, the Uncommon Grounds coffee shop staff is willing to assure the safety of the equipment, including the custom-designed cornhole equipment.

The esplanade’s prices will be lower than other nearby drinking establishments, providing an affordable alternative to the Georgetown and Washington, D.C. areas.

The most important step in securing this vision is finding loyal patrons among the Georgetown community. These student patrons will hopefully recognize that the esplanade is an accessible, beautiful and worthy alternative to overpriced bars and ineffective social spaces on campus.

Together, we can transform the esplanade into the community space that will be a hallmark of student life for years to come.

Max Wolfgang Rosner is a senior in the College. He is the executive director of SaxaFund.