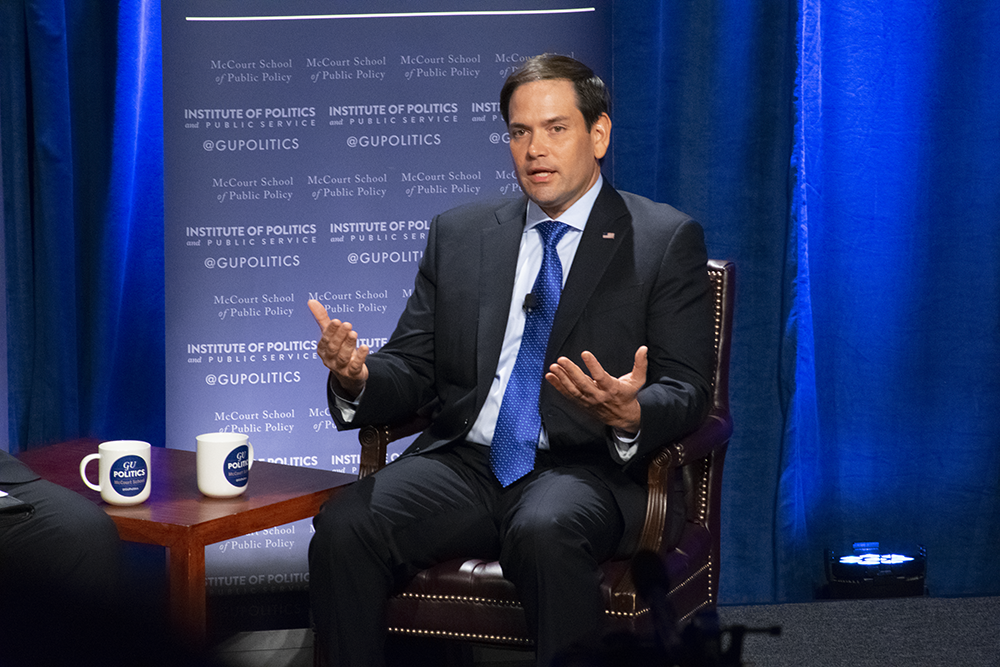 The increasing polarization of the two-party system results in part from growing geographical pockets of political homogeneity, Rubio said.

“If the only thing you know about another person is a political issue that you feel passionately about, it’s easy to dislike that person and to be angry at them, and that has become more true recently to the point where we actually have enclaves developing in America,” Rubio said. “People are actually moving to places where there are more voters like them, and less on the other side.”

Despite the development of political enclaves across the nation, Rubio’s home precinct in West Miami voted for Donald Trump in the 2016 presidential election while surrounding precincts voted for Hillary Clinton, exposing him to a diverse group of perspectives, according to Rubio.

Politicians with differing political ideologies must learn to work together and compromise on national policy to effect change, he said.

“Your own side will pillory you for selling out, you know, and the other side will say, ‘We don’t want you, because we disagree with you on nine other things,’” Rubio said. “That’s the problem right now, but eventually, that’s got to be broken through, and I think it does start with leadership and setting an example.”

Forty percent of the 245 bills Rubio co-sponsored in 2017 were introduced by non-Republicans.

One way to combat political echo chambers is to understand the viewpoints of people with differing backgrounds and political ideologies, according to Rubio.

“Americans have to know other people,” Rubio said. “We have to be more exposed to people that are not like us in America because I think you start to see them as people and not as statistics or a name or a check box on a census document and we used to have that more than we do today.”

Politics has creeped into every aspect of life, removing spheres where people can understand each other on a level outside of their political beliefs, Rubio said.

“The institutions that used to regulate how we treat one another, outside of government, outside of politics, have broken down or frazzled in a way that they no longer regulate how people treat each other in the political realm,” Rubio said. “We are increasingly taking away places where we can get away from it and interact in another realm.”

Rubio also commented on the hearings for Supreme Court nominee Judge Brett Kavanaugh, citing politics as a complicating factor in the ultimate decision.

“This is for a position in the government, and the highest court of the land,” Rubio said. “That automatically drags politics into it.”

Many senators had already made their decisions to support or not support Kavanaugh prior to the release of the sexual assault allegations, according to Rubio.

“We should recognize that a significant number of senators that opposed Judge Kavanaugh opposed him before this even happened. They had already announced that they weren’t going to vote for him, obviously this doesn’t make them likelier to vote for him,” Rubio said. “Likewise, I would say that a significant number of senators who supported him had already announced that as well.”

Rubio said his decision on the Kavanaugh case is open to change depending on the results of the FBI investigation.

“You have to make decisions on what you know,” Rubio said. “What we know may or may not change over the next five or seven days, depending on how that process goes.”

Despite increasing polarization and the past week’s controversy, Rubio expressed pride in the United States and a hope for the country’s political future.

“Your business partners, your clients are just as likely to be halfway around the world as they are halfway across town and the ability to have grown up natively with the ability to collaborate with people far away and different from you is going to be one of the key currencies of success in the twenty first century,” Rubio said.