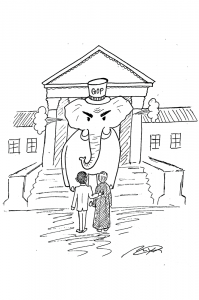 On Saturday, a small local newspaper, the San Antonio Express-News, reported that Supreme Court Justice Antonin Scalia was found dead at a west Texas ranch. A Georgetown alumnus and Supreme Court justice known for his intellect and wit, Scalia’s death immediately sparked a political firestorm. Due to his record as one of the most conservative justices on the Supreme Court, such a politicized reaction was perhaps inevitable. The 5-4 conservative majority on the Supreme Court has been thrown into jeopardy: If President Barack Obama nominates a liberal justice to fill Scalia’s vacancy, the Court’s jurisprudence will shift radically. In the context of unprecedented levels of polarization between the Democrat and Republican Parties and the high stakes of the upcoming presidential election, conservatives have found such a prospect unbearable.

Within hours of the justice’s death, Senate Majority Leader Mitch McConnell (R-Ky.) said, “The American people should have a voice in the selection of their next Supreme Court Justice. Therefore, this vacancy should not be filled until we have a new president.”

Such a statement was problematic but telling — by promising to reject President Obama’s appointment out of hand, without any knowledge of the nominee’s qualifications or ideological leanings, McConnell cast a grim shadow on the Republican Party’s reputation for collaborative work and progress. Republican congressmen are refusing to fulfill their constitutional responsibilities — to provide “advice and consent” on a judicial nomination — out of dislike for the president, with strong vocal support from the Republican frontrunners in the presidential race. This sends a clear message to voters that partisan obstructionism is the tactic of the hour. The issue is not whether the Republican-controlled Senate would confirm President Obama’s nominee, as no one would be surprised if they did not, but that they pre-emptively rejected any Obama-appointed replacement.

Aside from the dictates of the United States Constitution itself, precedent is not on McConnell’s side. Since 1900, the Senate has voted on eight Supreme Court nominees during an election year, with six ultimately confirmed. President Obama has 336 days remaining in his term; the Senate has never taken longer than 125 days to vote on a successor from the time of nomination, and on average, the confirmation decision takes 25 days. The Constitution is painfully clear on the procedure to fill a Supreme Court vacancy. Until President Obama leaves office, he is required to fulfill his duty and nominate someone to the Court; the Senate, in turn, is required to convene the standard hearings for the nominee. If nothing else, Scalia was a strict Constitutionalist – this editorial board doubts he would be impressed to see such political games waged in the wake of his death.