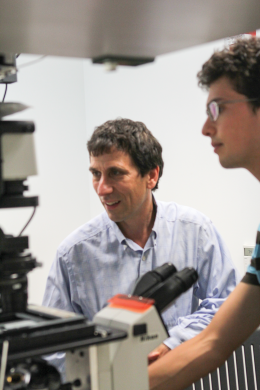 As recently named interdisciplinary chair in science, physics professor Jeff Urbach said he hopes to build bridges between academic disciplines, scientific and beyond.

The honorary position recognizes interdisciplinary research and excellence in teaching and advising.

“Professor Urbach’s work is a wonderful example of interdisciplinary research that crosses the boundaries of physics and biology in particular,” said Allison Whitmer, senior associate dean for strategic planning and faculty development.

Urbach has worked in Georgetown’s physics department since 1996. He helped found the Program on Science in the Public Interest, which focuses on the intersection of science and society.

“I like the interdisciplinarity of it, the fact that in brings in a lot of different types of science,” Urbach said.

In addition, Urbach currently serves as director of the Institute for Soft Matter Synthesis and Metrology.

“It can be a uniquely productive experience because his perspective is different than mine,” Roepe said. “It’s eye opening.”

Urbach said that the recent opening of Regents Hall has been especially exciting because the building is designed to facilitate student collaboration across scientific disciplines.

“A big part of the design was putting the disciplines in close proximity so we could interact more,” he said. “I think that’s going to be very important in the long run.”

Urbach added that the undergraduate research opportunities promoted by the new building will teach students skills they cannot learn in lecture alone.

“I want them to develop this independence and work out their own solutions to a problem,” he said.

“I worked for him all summer and am now doing my thesis this semester with him. He really knows his stuff and is … a great resource for me in my project,” he said.

“Doing summer research with professor Urbach was one of the very best experiences I’ve had at Georgetown,” she said. “He was very eager to help me in the application process and clearly has an interest in seeing young scientists get the valuable research experience they need.”

Urbach said that his favorite part of working at the university is having the opportunity to interact with students.

“I really like the diversity of things we get to be involved in,” he said. “It’s a privilege to come to work every day and help students advance their knowledge and understanding.”