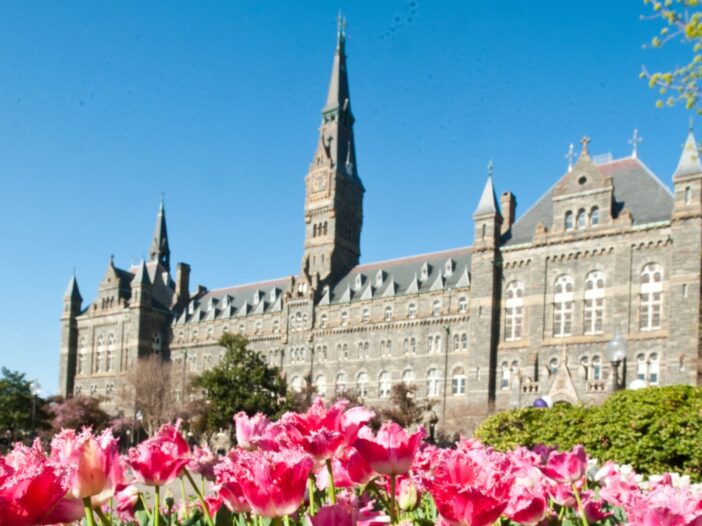 Georgetown University requires all undergraduate students to complete a course designated “Science For All” (SFA), grounded in the belief that all Georgetown students should understand scientific thoughts and concepts.

First introduced to the Walsh School of Foreign Service (SFS) in 2018, the requirement applies to all five undergraduate schools at Georgetown as of Fall 2019. The requirement is the newest addition to Georgetown’s shared core, which also consists of two philosophy courses, two theology courses, humanities: art, literature and cultures (HALC), writing and two “engaging diversity” courses.

Now in its eighth semester, the SFA requirement has received mostly positive reviews, with some students and professors pushing for expansions or additions to existing courses.

The SFA requirement received broad support when it was first proposed, according to Edward Van Keuren, a physics professor at Georgetown, member of the core science committee, and former member of the main campus core curriculum committee.

“Faculty from the SFS and the business school all thought that Georgetown students really needed to have some level of scientific literacy when they graduate,” Van Keuren told The Hoya. “The big reason is a lot of the issues that we’re faced with these days have some sort of science component to them, whether it’s vaccination or climate change or renewable energy.”

SFA courses are geared toward students who otherwise may not have taken science courses at Georgetown. Current SFA courses include “Information in the Brain,” “Science in the News,” “Biodiversity and Conservation” and “Innovating with Modern Physics.”

For some students like  Leila Sebastian (CAS ’24), the SFA courses have been a positive addition to their college experiences.

“I am grateful to have taken the class and would take it again,” Sebastian wrote to The Hoya. “That being said, I do not plan on taking any other science classes at this school and probably would not have in the first place if it were not for the requirement.”

Although SFA courses are intended to be accessible for students of all majors and backgrounds, they are not intended to be any less rigorous than other Georgetown courses, according to Cynthia Wei, director of science education in Georgetown’s program in Science, Technology and International Affairs.

“They’re not supposed to be blow-off, easy classes,” Wei said. “We make it more accessible, and I don’t want to make it so intimidating that people hate it. But we also want to challenge students to think in a scientific way and to develop some skills.”

The SFA requirement can fall short of some students’ expectations, including Keith Richards’ (SFS ’24).

“I felt like it was super dumbed down,” Richards told The Hoya. “It really pushed the whole ‘SFS equals safe from science’ narrative.”

The term “Safe From Science” is a spoof of the initials of the SFS, reflecting the fact that SFS students who graduated before 2022 were not required to take any science courses.

Other students such as Nicholas Riccio (SFS ’24) have found it difficult to register for an SFA class that appeals to their interests in the first place.

“The options are limited and there are only a couple of SFA classes that students get really excited for,” Riccio wrote to The Hoya.

According to Van Keuren, the core science committee is actively responding to this issue. “We’ve created a number of new courses in response to the need for seats in science for all classes,” Van Keuren told The Hoya.

In addition to adding classes, Van Keuren and Wei said some professors are also exploring the option of adding a lab component to existing classes that are currently in a classic lecture-and-exam format.

“The one thing some of us would really like to do more of is incorporate lab-based components,” Van Keuren said. “The more experimental, hands-on stuff we can do the better.”

According to a university spokesperson, Georgetown is open to exploring additions and changes to the SFA requirement.

“The University is extremely supportive of exploring course options that reflect the broad interests of our students, as well as University values,” the spokesperson wrote to The Hoya.  “The SFA requirement, as with all changes to the Core Curriculum, will be reviewed after five years.”

Van Keuren reiterates the importance of science education. “It’s such a fundamental way of viewing the world that I think everyone should have at least some basic understanding of what science is.”

Wei adds, “There are reasons we know what we know, not just because we say so. And understanding that process is super important for everyone.”