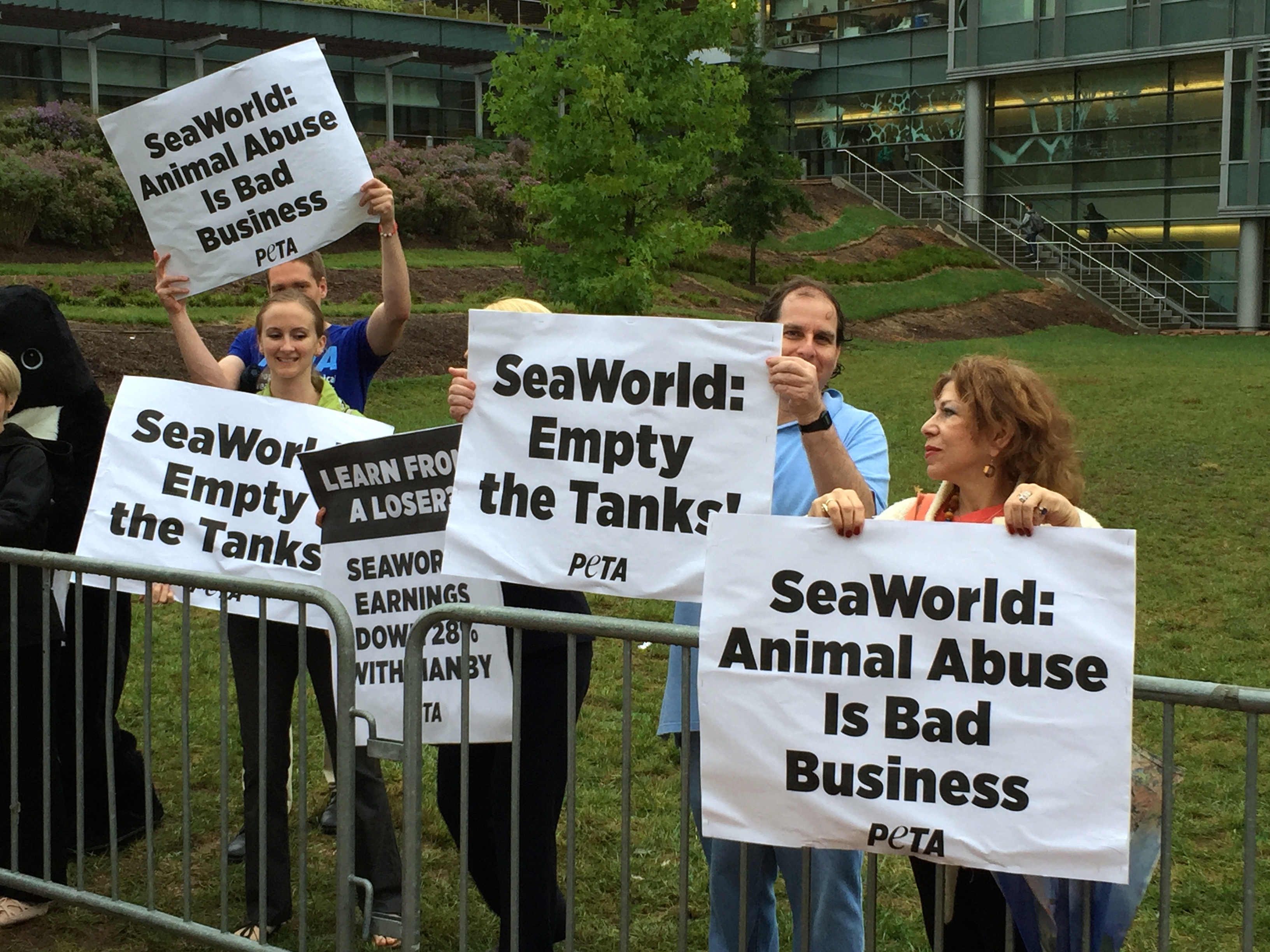 More than 20 demonstrators from People for the Ethical Treatment of Animals protested outside of the Rafik B. Hariri building during a discussion between SeaWorld Parks and Entertainment President and CEO Joel Manby and President and CEO of the Humane Society of the United States Wayne Pacelle on Sept. 29.

SeaWorld announced its alliance with the Humane Society last March along with changes to be implemented at its parks, such as the cessation of all orca breeding. However, to the chagrin of animal rights activists, SeaWorld decided against releasing the total of 29 orcas currently housed in its Orlando, San Diego and San Antonio sites.

The McDonough School of Business and Georgetown’s Global Social Enterprise Initiative co-hosted the discussion, which was titled “The Purpose-Driven Brand: Why Good Values Make Good Business.” Around 200 people attended the event in Lohrfink Auditorium.

Pacelle explained that his motivation for partnering with SeaWorld was to use the company’s powerful public brand and resources to advance causes of animal welfare and to support a positive animal welfare progress in a company.

“I made a judgment that SeaWorld … was a company that had good cash flow, that had a lot of visitors — but it had taken a pounding in terms of branding,” Pacelle said. “People who make tough decisions need support. We want to be a strong enough organization to deal with those brisk winds that come at a company that wants to change.”

Orcas have been the hallmark of SeaWorld since the original Shamu show nearly 50 years ago and the animals have attracted an estimated 400 million viewers since. Manby said it was difficult to reach the decision to stop orca breeding, but had to do so due to public pressure.

“We had built our entire brand around Shamu the killer whale,” Manby said. “It was clear that the orca issue — how people felt about these magnificent animals being under human care in that size of a pool — it made people uncomfortable. And it wasn’t just the fringe, it was the mainstream.”

In response to critics’ claims that the decision to keep the orcas was economically motivated, Manby said releasing the orcas would nearly guarantee their death.

“No cetacean in the history of mankind, whale or dolphin, born under human care has been released into the wild and survived,” Manby said.

Activists contended the orcas would be happier and healthier in bounded areas of open oceans called sea sanctuaries, which simulate the orcas’ natural environment better than confinement pools.

According to Manby, SeaWorld’s pools are a better alternative to sea sanctuaries, which he claims have no precedent of success. Nonetheless, Manby said SeaWorld is open to all options, including sea sanctuaries, if there is sufficient evidence to support their effectiveness.

“If we research it, we find out that maybe we’re wrong, we will do the right thing for the whales,” Manby said. “But it is not easy, it is complicated and is incredibly expensive.”

Manby expects SeaWorld’s current orcas to be around for another 50 years, but he explained that his vision for the company’s future primarily emphasizes educational entertainment, or “edu-tainment,” centered on the plight of oceans and marine mammals, instead of highlighting live animal shows and exhibits as it has in the past.

Much of the damage to SeaWorld’s branding came from the massively popular and critically acclaimed documentary “Blackfish,” which tells the story of Tilikum, a SeaWorld orca involved in three human deaths, including that of trainer Dawn Brancheau who was killed while performing in a show in 2010.

SeaWorld suffered falling revenue and attendance after “Blackfish,” and so far in 2016 its stock has dropped 38 percent since the beginning of the year. Manby attributes much of the downturn to Brexit — as England is SeaWorld’s second biggest market — and to Brazil’s deteriorating economy. However, Manby argues the March announcement helped both SeaWorld’s branding and market performance.

“When we made the announcement, the market reacted really well. Our stock went up 21 percent,” Manby explained. “Our favorability rating was eight-to-one more positive the next week and people were five-to-one more likely to visit our park.”

Rina Zelaya (GRD ’17) said she walked out of the event feeling more positive toward SeaWorld because of its ability to adapt.

“It showcased how businesses can and should be adaptable,” Zelaya said. “In changing their mission, [SeaWorld] changed their business model and they’re doing it successfully.”

Katherine Cole (MSB ’18), who is president of Georgetown’s animal rights group, Animalia Georgetown, believed Manby was insincere and disapproved of the Humane Society’s partnership with SeaWorld.

“I thought that [Manby] was just giving canned PR responses,” Cole said. “I’m very disappointed in the Humane Society of the U.S. for making this partnership as many animal advocates are.”