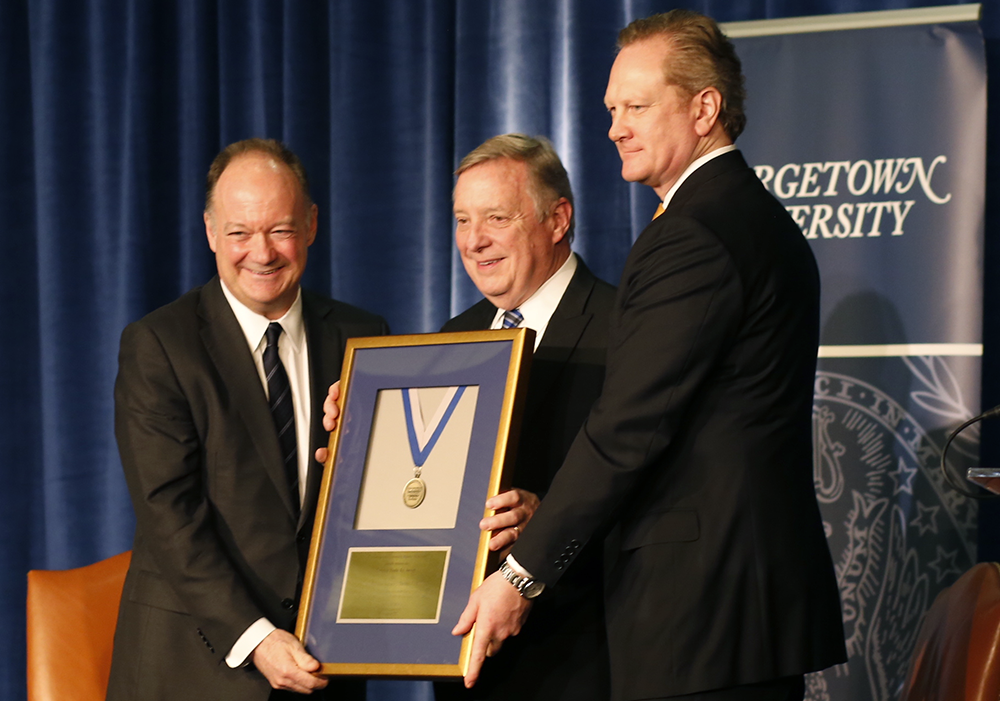 The Healy Award, which was established in 1996 and is named after the university’s 46th president, recognizes Georgetown alumni who have displayed exemplary commitment to service and humanitarian efforts, according to information about the award published in the announcement. Previous recipients include former President Bill Clinton (SFS ’68) and former NBA player and philanthropist Dikembe Mutombo (COL ’91).

DeGioia, in the presentation of the award, lauded Durbin for his commitment to the common good and service.

“Today’s awardee, like those who have come before him, exemplifies a life of service and commitment to the common good,” DeGioia said. “Throughout his career, Senator Durbin has modeled civility and bipartisanship, and he has sought to ensure that we live out and live up to the values of our nation.”

Durbin, a native of East St. Louis, Ill., graduated from the School of Foreign Service in 1966 and from the Georgetown University Law Center in 1969. He has served in Congress since 1983 and in the Senate since 1997, where he now serves as the minority whip.

Durbin attributed much of his political successes to the education he received at Georgetown. However, he said he did not always consider attending Georgetown.

He recalled growing up in an immigrant household, experiencing his father’s death in high school, commuting to St. Louis University for a year, finding the commuter experience lacking and gaining a desire to go away to school. Interning at the office of Sen. Paul Douglas (D-Ill.) piqued his interest in D.C. politics, Durbin said.

Today, Durbin said he is grateful for the education he received at Georgetown.

“Georgetown played such a critical role in educating me, in so many different ways,” Durbin said.

In his acceptance speech, Durbin spoke on immigration policy and on his goal of providing young immigrants with equal opportunities in the United States. In 2001, Durbin and Sen. Orrin Hatch (R-Utah) introduced the DREAM Act, a proposal that would have gone beyond the protections offered by the Deferred Action for Childhood Arrivals program to include permanent legal protections for many undocumented immigrants, but did not pass in Congress.

DACA, an executive program established by former President Barack Obama in 2014, allowed young people without documentation who entered the United States as children to remain in the country. The administration of President Donald Trump announced the rescission of DACA last fall.

“Young people in those circumstances should be given a chance,” Durbin said. “If they don’t have a criminal record, if they’ve got a good record in education, let them have a path to legalization and to their citizenship.”

Durbin shared stories of immigrants without documentation who were denied opportunities because of outdated immigration law, through no fault of their own, according to the senator.

Durbin spoke about Tereza Lee, an 18-year-old who would be forced to leave the country for 10 years to achieve citizenship because her parents brought her to the United States on expired tourist visas.

“That’s not fair — she’s done everything right and struggled doing it, now she just wants a chance to do better,” Durbin said.

Today, the future of immigrating policy is unclear, as President Donald Trump and his administration have been on the fence regarding their support for the DACA program and the 2017 Dream Act in the last year.

“There’s some skepticism about where [Trump] will end up,” Durbin said. “I hope we can get this done soon, and I hope the president will join us. I don’t think we can do it without him.”

Durbin also discussed the impact a national dialogue on gun violence can have on creating policy change. Drawing on the recent shooting in Parkland, Fla., which killed 17 people in a high school, Durbin emphasized the role young people can have in directing the conversation toward reform.

“Thank goodness for these students. It’s only been two weeks, and they’ve been pretty active and visible,” Durbin said. “They’ve brought into this debate something that had been missing; they are pushing this debate to a different place.”

This article has been updated.