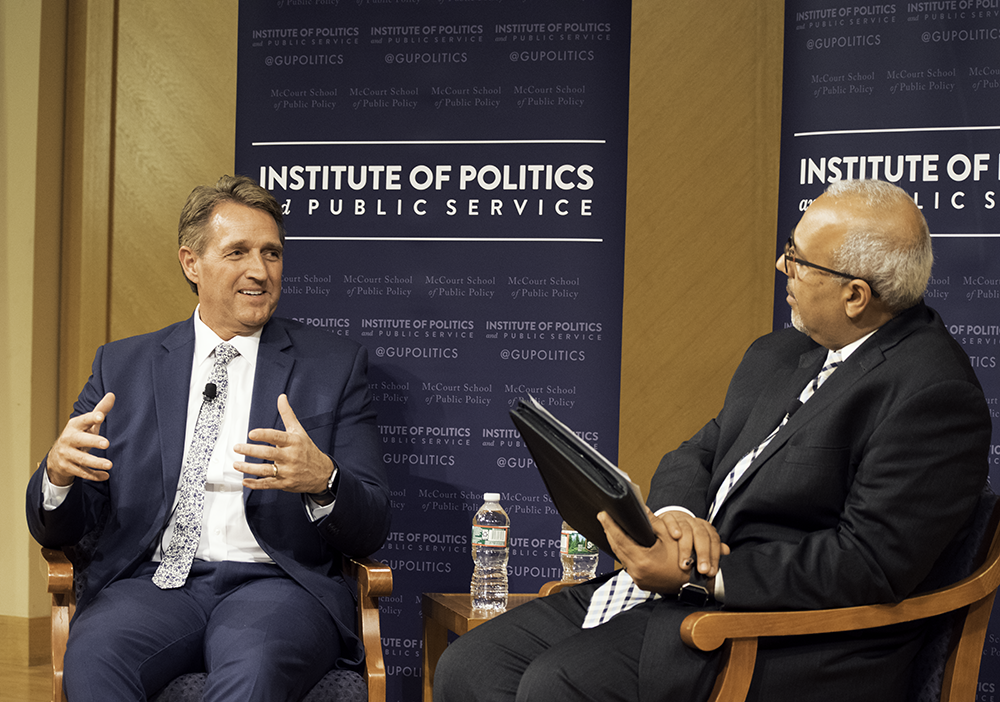 Senator Jeff Flake (R-Ariz.) emphasized the importance of bipartisan cooperation and his concern for the “vanishing middle” in an event hosted by the Georgetown Institute of Politics and Public Service and moderated by GU Politics Director Mo Elleithee (SFS ’94) in Lohrfink Auditorium on Monday evening.

Describing himself as a traditional conservative, Flake explained his fear regarding the loss of moderate centrists in Congress because he believes that as the number of moderates declines, the power in the executive branch of the government increases.

“I am very concerned about the vanishing middle in politics,” Flake said. “You always had a time when there were a lot of conservative Democrats — more conservative than the most liberal Republicans — and now you just don’t have many cross over, and that is dangerous.”

Flake, who announced in October that he will not be seeking re-election in 2018, did not confirm or deny whether he would consider running as a third-party nominee in the 2020 presidential election, but he did say he could foresee a successful independent run — whoever the candidate might be — in the near future.

“If President [Donald] Trump decides to run for a second term, and all the energy in the Democratic Party right now is on the left, the far left — either [Sens.] Bernie Sanders [I-Vt.], Elizabeth Warren [D-Mass.], Kamala Harris [D-Calif.] — if the Democrats nominate somebody from their left, and if we nominate somebody who is on our far right, there’s got to be a huge swath of voters in the middle looking for something else,” Flake said. “I’ve always said that the time for an independent is in the future; it may not be so far.”

The senator has distanced himself from much of Trump’s rhetoric, especially from that on immigrants in the United States. Having grown up on a ranch in Arizona, Flake said many of the workers his family hired had migrated to the United States illegally, and his exposure to them from a young age formed his vision that immigrants are not to be feared or hated.

“I got to know these migrants,” Flake said. “I knew why they were coming, what their motivation was and I’ve never been able to look at them and see a criminal class.”

Flake also spoke out opposing the president’s stance against news organizations, especially regarding Trump’s tweet last February referring to the media as the “enemy of the people.” Still, Flake agreed a liberal media bias exists.

“As a conservative, there is generally a bias, but you accept that and you move on,” Flake said. “I think it’s awful to have the president of the United States not understand history well enough to know that you don’t use, you shouldn’t use a term like ‘enemy of the people’ that was most famously used by some people we don’t want to emulate.”

Flake’s denouncement of Trump’s rhetoric toward the media echoes his Jan. 17 speech on the Senate floor, in which he called it “shameful” for the president to use these words spoken by Josef Stalin.

Rather, Flake believes politics do not have to be as bitter and divisive as they are,

Flake has been known for his efforts at promoting bipartisan cooperation, famously stranding himself on a deserted island for a week in 2014 with Senator Martin Heinrich (D-N.M.) for the Discovery Channel program “Rival Survival.” Last month, Flake donated $100 to the campaign of upset-winner Senator Doug Jones (D-Ala.) after allegations of sexual misconduct circulated about Republican rival Roy Moore, tweeting the message “Country over Party” with a photo of the check.

“We have massive problems here in the country,” Flake said. “But when you look at our history, with the Civil War and women’s suffrage and other things that we’ve gotten through and we’ve found a way to be on the right side of, the challenges we face today are small by comparison. And it just takes good will on both sides.”