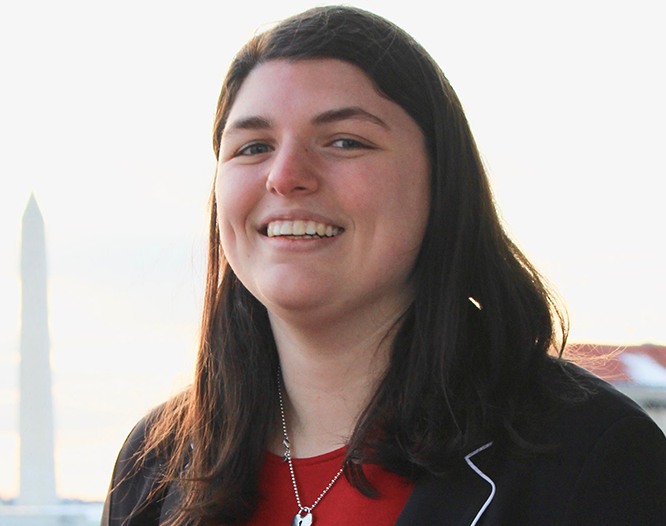 Sara Rotenberg (NHS ’20) became the first student from the Georgetown University School of Nursing and Health Studies studies to be named a 2020 Rhodes scholar from Canada, according to a Nov. 23 university news release.

Winners of the Rhodes scholarship, the oldest international fellowship in the world, can pursue a degree at The University of Oxford in Oxford, England. Rotenberg, a global health major, will pursue a master’s degree while studying evidence-based social intervention and policy evaluation in fall 2020, according to the news release.

Rotenberg first learned she had received the scholarship in November while she was visiting family in Canada. While the scholarship surprised Rotenberg, it validates her hard work and academic accomplishments, she said in an interview with The Hoya.

“It was a bit of a blur, I’d say, and I was with my parents, and we were all very excited. We all cried a bit and hugged each other. It was a good moment,” Rotenberg said. “I’ve worked very hard, and I’ve had a lot of very cool experiences, so it’s nice to be recognized for that, but ultimately I think a lot of it is about what’s next.”

At Georgetown, Rotenberg completed a student fellowship with the Georgetown University Global Health Initiative and wrote a paper about population policies in sub-Saharan Africa with global health professor John May. The two presented their work at the Population Association of America annual conference in Austin, Texas, in April 2019.

The pair submitted their paper to a peer-reviewed journal, which is currently considering the work for publishing. Throughout the process, Rotenberg exhibited an understanding of difficult demography concepts and an excellent work ethic, according to May.

“I was really impressed because of her quick grasp of the technicalities of demography,” May wrote in an email to The Hoya. “I’m impressed by her drive and hard work, she’s a young person but she knows exactly what she wants to do and where she wants to go.”

Rhodes scholars are chosen annually after applicants undergo a written application, a series of interviews and formal receptions with former panelists and former Rhodes scholars. Thirty-two winners are selected from the United States; however, Rhodes scholarships are also available to citizens of certain other countries. The scholarship had a 0.7% acceptance rate in 2017, with accepted candidates being chosen for their academic merit, character, leadership and commitment to the common good, according to the Rhodes Trust website.

While abroad in Mumbai, India, this summer, Rotenberg researched the accessibility of the Mumbai Metro system, one of the world’s largest development infrastructure projects. Her research was aimed towards offering suggestions for how the Mumbai Metro could become the first universally accessible metro system to individuals with disabilities.

Rotenberg was able to present the results of her research to Mumbai Metro planning team officials, who are receptive to her ideas, according to Rotenberg.

“I got to show their planning team how they can be accessible, and they’re very interested in working with me and professor Irfan Nooruddin, who runs the India initiative, and continuing to see how we can do that,” Rotenberg said. “So that’s pretty exciting, and we just want a grant for that so we can continue that work.”

“This is an extraordinary accomplishment and our entire Georgetown community joins me in offering our sincere congratulations to Sara,” DeGioia wrote. “Her dedication to her studies as well as her advocacy for the equity of people with disabilities embodies the very best of our values as a University, and we look forward to all she will accomplish as she pursues graduate work at the University of Oxford.”

The Rhodes scholarship will give Rotenberg the opportunity to continue her work on disability inclusion advocacy in international development, which she has been studying through her major, she said.

“My proposal is working on disability inclusion and international development, so it’s really ‘How can I use the next two years to build a body of evidence and inspire policy that is disability inclusive?’” Rotenberg said. “That’s what that means to me and where I’m going with it, and I’m really excited about that.”

Correction: This article was updated Dec. 7 to clarify the nature of Rotenberg’s work researching the Mumbai Metro.