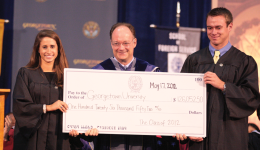 This year’s graduation festivities started with a bang Thursday afternoon as the Class of 2012 presented a record-high gift to the university during the convocation ceremony.

The $126,052.50 check, which was presented by newly elected 2012 Alumni Class Chairs Chris Butterfield (MSB ’12) and Katie Eisenstein (COL ’12), included funds raised by the Class of 2012 and a matching donation from the board of regents.

In March, an anonymous donor announced that he or she would donate an additional $1 million to the university if more than 68 percent of seniors contributed to the class gift. The Class of 2012 exceeded this benchmark by 2 percent, setting a record at 70 percent participation.

The convocation address was given by Helen O’Reilly (SFS ’03), who has worked to provide legal advice for children with disabilities in New York and was granted a Luce Scholarship to spend two years advocating for factory workers’ rights in the Philippines. Her speech encouraged seniors to reflect on their core values in their post-college lives. The address was followed by the presentation of the class gift, after which Butterfield and Eisenstein led their peers in affixing class pins to one another’s robes to represent their official membership in the Georgetown alumni network.

Official commencement festivities will continue through Sunday. Today’s graduation ceremonies present diplomas on behalf of all the graduate programs — other than the School of Medicine and the Law Center — and will take place on Healy Lawn.

The night before Saturday’s undergraduate commencement ceremonies, seniors and their guests are invited to attend the Senior Ball at Union Station. This year, the Senior Ball Committee hired a D.C. Circulator bus to take attendees back to the Georgetown area at the end of the night.

Undergraduate commencement ceremonies will begin with the Georgetown College graduation, followed by the School of Nursing and Health Studies, the Walsh School of Foreign Service and the McDonough School of Business. There are 1,868 seniors graduating, including students from the School of Foreign Service campus in Qatar. The valedictorians addressing their classes will be Nadia Mahmassani (COL ’12), Alison Lauter (NHS ’12), Anton Strezhnev (SFS ’12) and Perry Rogers (MSB ’12).

For many seniors, this weekend’s festivities will offer an opportunity to join together with old friends and reflect on their shared experiences.

“In some instances, you see the faces of people you met for orientation. Instead of meeting new people, you’re reconnecting with them,” Marzena Zukowska (SFS ’12) said.

Every year, deans of the respective schools organize the speakers for each ceremony. This year’s speakers range from journalist and “The Wire” producer David Simon, who will speak before the College, to LivingSocial founder and CEO Tim O’Shaughnessy, who will speak at the commencement ceremony for the McDonough School of Business.

The weekend’s festivities end Sunday with the Baccalaureate Mass, commencement brunch and the School of Medicine and Law Center graduation ceremonies.

Director of Academic Events Meghan Hogge estimates that in total, there will be tens of thousands of guests on campus for the weekend’s events. There are 7,500 chairs set up for guests on Healy Lawn, but some ceremonies, including the College and Law Center graduations, feature additional standing room.

According to Karen Frank, vice president for facilities and student housing, there are approximately 350 commencement guests — 100 fewer than last year — staying on campus in Village C West, Harbin and New South Halls.