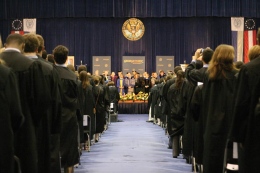 As Senior Week transitioned into Commencement Weekend, members of the Class of 2011 gathered in McDonough Arena Thursday to observe senior convocation.

Unlike many of the ceremonies this weekend that are school-specific, convocation was a moment for the students of all four undergraduate schools and the School of Continuing Studies to jointly commemorate their achievements.

With families and friends looking on from the side risers, the seniors listened to University Provost James O’Donnell describe the Class of 2011 by numbers. He listed each one of the 57 nations outside of the United States that are represented in the class, including South Korea, the United Kingdom and the Sudan. He also noted that many students have been awarded competitive fellowships, including six Fulbright scholars and that 52 seniors have accepted positions with Teach for America, a record for a graduating class at Georgetown.

Jacqueline DesJardin (COL ’11), a star goalkeeper on the women’s soccer team and a neurobiology major, and Loghman Fattahi (SFS ’11), a native of Iran who will pursue a master’s in law and diplomacy at Tufts University, spoke after O’Donnell.

Although they hail from different backgrounds and have studied in different disciplines, DesJardin and Fattahi’s messages to their classmates complemented each other. DesJardin began by speaking of the challenges associated with living up to one’s potential.

“Growing up, I loathed the word ‘potential,'” she said. Detailing obstacles she faced early in her college career, she recalled her fear that she was wasting the talent that her parents, coaches and mentors had continually encouraged her to use.

“I was beginning to wonder: Was I squandering all of that so-called potential, or did I even have it to begin with?” she said.

To answer that question, DesJardin used an analogy from neurobiology. She described the development of neurons in the brain, explaining that they can mature only by making connections to other neurons. Through a process known as pruning, weaker neuron connections are dissolved, while stronger ones help a neuron perform optimally.

“Luckily,” she continued, “neither neurons nor people have to go at it alone. Thankfully, at Georgetown, I found a community of students, instructors and coaches who helped to direct my growth … Not only biology, but life itself, is characterized deeply by interdependence.”

DesJardin’s advice to her classmates to lean on their support networks in order to improve themselves and the world around them dovetailed with Fattahi’s theme of compassion. He related the story of his family, who sought political asylum in the United States after his father escaped from prison in Iran.

He emotionally recounted the trials of his family, before recognizing the Hilltop as a place where he has found safety and empathy.

“Georgetown has been my sanctuary. I have found that, here, compassion is everywhere. It is present when you, my classmates, dedicate your time to mentor underserved children in the District of Columbia. … It is present in the Jesuits’ commitment to the promotion of justice.”

Joseph Almeida (COL ’05) rounded out the convocation speakers by sharing some of the life lessons he has learned as a grade school teacher, with Teach for America and as a teacher in a Manhattan charter school. In true teacher form, he presented his core message in easy-to-remember tips, complete with hand motions, that he hopes graduates will carry with them going forward.

Almeida advised the seniors to develop strong relationships, to be honest, to find a hobby and to not fear failure.

DesJardin tasked her fellow seniors with similar adages in her closing remarks.

“Our challenge is strong, but so is our potential.”