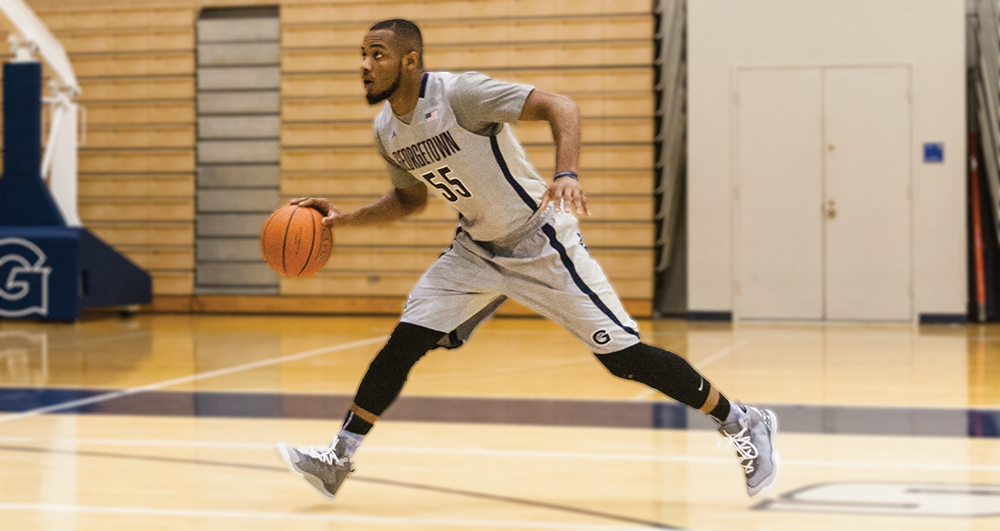 There is guard Jabril Trawick, the tough-nosed player from West Philadelphia who wears his heart on his sleeve.

There is center Joshua Smith, the giant from Kent, Wash., with the soft touch, whose size is both his most brutal enemy and his greatest asset.

There is forward Mikael Hopkins, the lanky power forward desperate to break out before his time runs out.

There is forward Aaron Bowen, the fifth-year swingman looking to leave a legacy beyond a handful of highlight dunks.

Finally, there is senior center Tyler Adams, whose career was halted by unforeseen circumstances. He stands there, rebounding warm-up jumpers for a team that he could have walked away from.

They arrived at different times and from different roads. They have seen a classmate leave for the pros and another throw away his potential. They have won a regular-season conference championship, and they have survived catastrophic postseason upsets and the death of the old Big East.

Together, these five are the senior members of the Georgetown men’s basketball team, and what unites them is that they still have something to prove.

“Sure, we’ve had a lot of things happen that don’t usually happen in a program, but coming into this year we’ve got a fresh start,” Trawick said. “When we don’t go to the tournament and we lose, it’s a big problem.”

“With the way my personality is and the kind of player that I am, I’m going to be a natural vocal person on the court and off the court. I just try to teach, so I’m going to be a leader,” Trawick said. “We’ve got high expectations this year, especially with the group that we’ve got, [so] we want to win big, we want to make a deep push in the tournament, win the Big East and we want to lose as few games as possible.”

Georgetown was sent home in the second round of the 2012 NCAA tournament by North Carolina State, which had not beaten a ranked team in the regular season. That disappointment was nothing compared to the catastrophe that was next year’s Florida Gulf Coast game. In that first-round NCAA tournament game, the second-seeded Hoyas lost to a 15th-seeded program that had only come into existence in 1991.

After sitting out a year, highly touted big-man Josh Smith joined the fray in 2013-2014 to ease the pain from forward Otto Porter’s departure for the NBA. But, academic issues kept him off the court after just 13 games, and the Hoyas’ season came to an end against Florida State in the National Invitation Tournament.

“This is my senior year, so I’ve got to go all out,” Smith said. “Me and [Hopkins], if we can get at least 15 baords between us, that will put us in a better position.”

Smith is capable of being unstoppable on the low block. His impressive size is matched by surprisingly nimble footwork. When asked about Smith’s fitness, Head Coach John Thompson III said that Smith is, “better; he’s been good, [I have] cautious optimism.”

“I feel sorry for the guys that are going to have to try to guard him this year,” Hopkins said of his low-post partner. “In practice, I get to beat him up a little bit, and I don’t foul out. In the game, they’re going to have to do a lot of work. Josh is one of the biggest athletes playing sports, and it’s not just that he’s big. He’s got good hands, he can handle the ball and he can finish.”

Hopkins, has benefited greatly from both the double teams Smith draws in games and the experience of practicing against him. The 6-foot-9-inch power forward is aware of the late development of recent Georgetown big men. Roy Hibbert (COL ’08) and Henry Sims (COL ’12) found themselves on NBA rosters thanks in large part to breakout senior years.

“A lot of people around campus say that this is my Henry Sims senior year because people saw that his first three years, he didn’t play as much; but his last year he did a lot of work in the offseason, and he came back ready to play,” Hopkins said. “He put some numbers on the board, and that gave him the chance to make it at the next level. Hopefully this is the year that I’ll be able to do that. Hopefully this is the year that this team can win.”

Aaron Bowen is the wildcard of the roster. In a Georgetown squad that is armed both with experience as well as a freshman class full of potential, the Jacksonville native and fifth-year senior can be the bench spark other teams don’t expect.

“With the freshmen and Josh back, we should have been picked number one this year,” Bowen said. “It has to be a team effort to win if we want to be a number one seed this year, which we are going to do.”

Among the bouncing balls and screeching shoes that make up the chaos of a Georgetown basketball practice, the smiling face of Tyler Adams is a constant. The soft-spoken Mississippian appeared in only four games as a freshman before the discovery of a heart condition ended his playing days. Since then, Adams has remained with the team as a positive presence, despite the cruel nature of his condition.

“Tyler has a unique stick-to-it-iveness that is unique. He came in [and we were] anticipating him being an integral part of what we were doing from day one. And then he has heart issues and can’t play. That’s hard. That’s hard. For someone that basketball has meant so much to him, it is hard on him, and it is hard on us,” Thompson said.

This group of seniors has been through many ups and downs together. They helped Georgetown reach the NCAA tournament, only to be knocked out in the first weekend. They made headlines brawling with a professional Chinese team, but also silenced Syracuse University’s Carrier Dome with a signature win. If these seniors want to be remembered fondly on the Hilltop, it is time for them to make their mark.