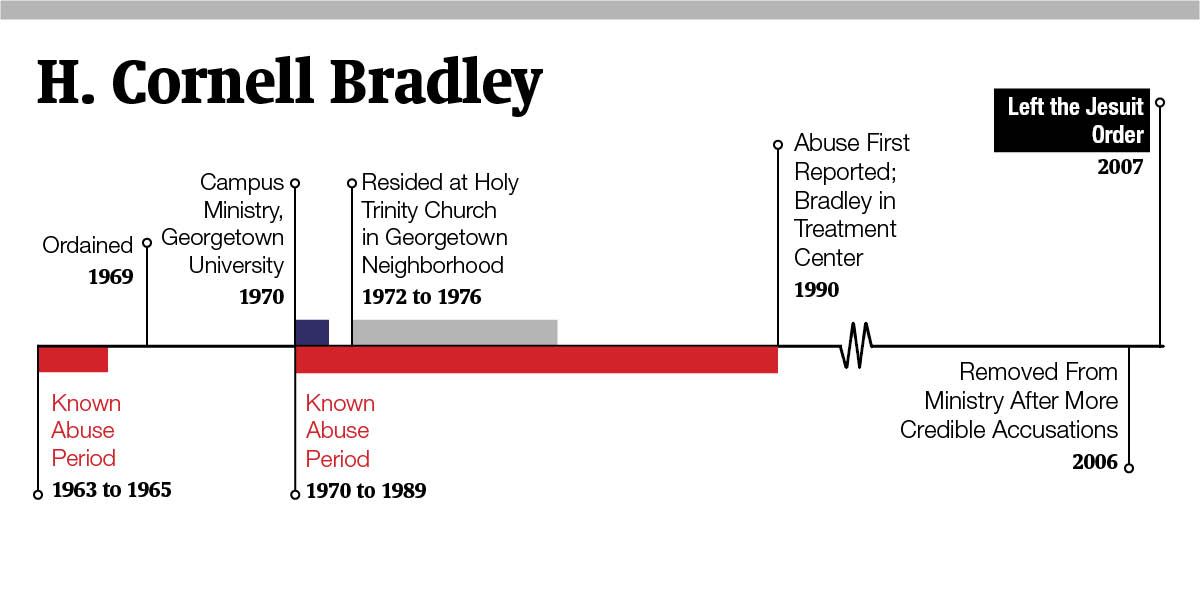 In between two periods of abusing minors as an administrator and a teacher at Gonzaga College High School in the 1960s and 1970s, former Jesuit priest H. Cornell Bradley worked as a campus minister at Georgetown University. Neither the university nor the Maryland Province of the Jesuit order, which has deemed allegations against Bradley credible, have acknowledged his time at Georgetown since his abuse was made public in 2006.

One year after his ordination, Bradley, who left the Jesuits in 2007 shortly after being removed from ministry, came to Georgetown in 1970, according to the Official Catholic Directory and contemporaneous records catalogued by the Maryland Province.

Bradley, now 80, lived two blocks from the university’s front gates at Holy Trinity Church from 1972 until 1976, according to a December 2018 report issued by the Maryland Province of the Society of Jesus.

The province did not include Georgetown on Bradley’s assignment record for the report but later acknowledged his work on campus in a March 13 statement to The Hoya. Georgetown has not publicly acknowledged the allegations against Bradley, of which it was first notified by a March 1 email from The Hoya.

After Bradley was removed from ministry amid several credible accusations brought forward in 2006, the province sent letters to former places of employment to obtain information about any other potential abuse allegations. These letters helped surface five new allegations of abuse from students and staff at several of Bradley’s past assignments.

But because Georgetown is not listed in Bradley’s pastoral assignments in the provincial records, those who came in contact with Bradley while he was on campus in 1970, a year that falls within his time frame of abuse as estimated by the Maryland Province, did not receive letters.

The absence of Bradley’s year at Georgetown on his record exemplifies common practices of the province meant to conceal details of sexual misconduct allegations, according to David Clohessy, former national director of the advocacy group Survivors Network of those Abused by Priests.

“I don’t think it’s a mistake at all,” Clohessy said in a phone interview with The Hoya. “We see this more often than not. Church officials act like they’re being forthcoming but very, very often withhold key information to paint a less awful picture about what went on.”

The first credible and substantiated accusation against Bradley was brought forward in the early 1990s by a woman who reported a long-term, sexually abusive relationship with Bradley in the 1970s, after he left Georgetown, according to The Washington Post. Bradley, who was assistant principal of Gonzaga at the time of the relationship, was “unable to deny the allegations,” according to a provincial spokesperson quoted in the Post.

Also in the 1990s, Bradley faced two accusations of inappropriate sexual contact with minors at Gonzaga in the late 1970s, according to articles in The Baltimore Sun and NBC News archived on Bishop Accountability, a website dedicated to aggregating records of clergy accused of sexual misconduct.

Based on these three accusations, Bradley was sent to a residential psychiatric treatment center in 1993 while at the provincial residence in Baltimore. When Bradley returned to the ministry in 1994 after concluding his treatment, he went to St. Joseph’s University in Philadelphia in 1994, where he worked as a campus minister and basketball team chaplain for 10 years.

Of the five allegations brought against Bradley following the Maryland Province’s letters in 2006, two were from a student and staff member at St. Joseph’s. The other three were from students at Gonzaga who attended the school during his time there in the 1960s and 1970s.

The Maryland Province has not received or reviewed allegations against Bradley from the 1960s, a spokesperson for the Province said in an email to The Hoya.

The church’s use of treatment centers, such as the one Bradley attended in 1993, is seen as a way to limit damage to the institution and to protect clergy members, according to Clohessy

“Generally speaking, the church hierarchy is fixated on damage control, keeping it quiet, protecting clerical careers and reputations, and assuming the best: that predators can, with a little bit of therapy or change of location, be cured,” Clohessy said in a phone interview with The Hoya.

In 2006, the Maryland Province permanently removed Bradley from ministry after deeming credible an accusation of sexual misconduct with an adult male in the 1980s, according to The Washington Post.

The province’s exclusion of Georgetown from Bradley’s pastoral assignments on his record removes the university’s accountability and deters questions from important donors and alumni, according to Robert Hoatson, co-founder and president of Road to Recovery, a nonprofit organization focused on helping survivors of clerical abuse.

Bradley has not been accused of sexual abuse during his time at Georgetown.

Failures to draw proper attention to all assignments of abusive priests can prevent survivors from coming forward, Hoatson said.

“Yes, it will silence other people from coming forward,” Hoatson said. “Every time we shine the light, every time the truth comes out, usually we find other victims.”