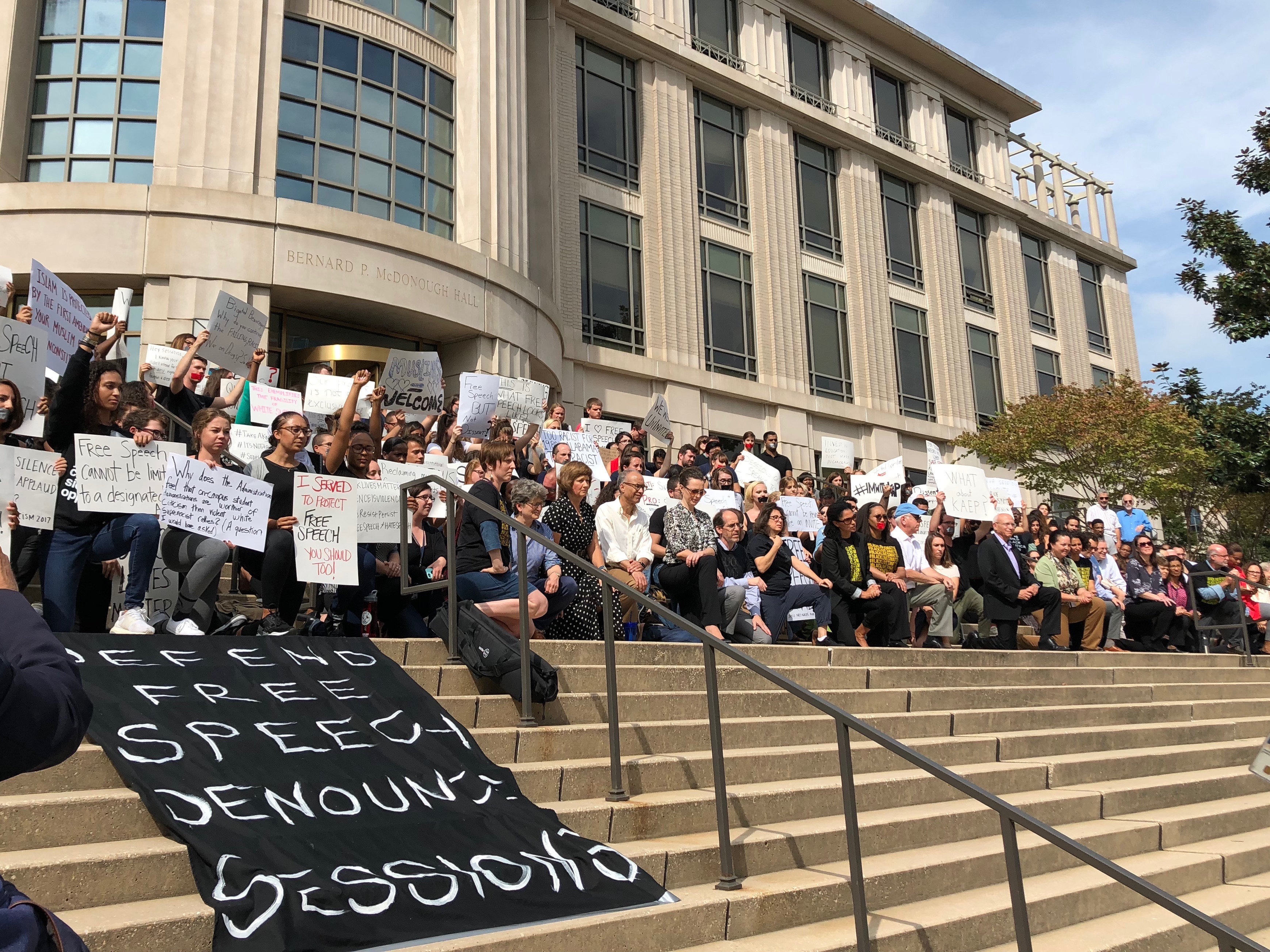 Law students protested the event’s organization for being overly selective after more than 130 students who had registered for the event were restricted from attending it, limiting the audience to students affiliated with the host Center for the Constitution, a Law Center program with the mission of educating students on remaining “faithful” to the Constitution’s text.

Sessions, whose remarks were followed by a question-and-answer session with constitutional law professor and Center for the Constitution Director Randy Barnett, warned that freedom of expression is in “retreat” on college campuses.

“Protesters are now routinely shutting down speeches and debates across the country in an effort to stop the forces that insufficiently conform to their views,” Sessions said. “This is not the great tradition of America.”

Georgetown was also the subject of criticism in 2016 over a Lecture Fund event with speaker Planned Parenthood President Cecile Richards, due to the university’s history as the oldest Catholic university in the United States.

Sessions contrasted the support some college administrators have shown students who disrupt unpopular speaking events with the efforts of Martin Luther King Jr. in ending segregation through his “unrelenting” words.

To safeguard the rights enshrined in the First Amendment, Sessions said, students must avoid ideological bubbles that stifle debate. Universities are harming that development by becoming “echo chamber[s] of political correctness and homogenous thought, a shelter for fragile egos,” Sessions said.

But students said the event ran contrary to the values it purported to advance given that Sessions only answered pre-selected questions submitted by a limited audience.

In an interview with The Hoya, Lauren Phillips (LAW ’19) said this contrast diminished the speaker’s credibility.

“To those of those who were not allowed to be in the room, it seems an awful lot like the one who had a fragile ego was the attorney general, because he could not stand the thought of having students asking questions that were not pre-screened,” Phillips said.

Students first found out about the event through an Axios report Sunday night, and GULC sent out email invitations Monday morning to a list that included students who signed up for the Center for the Constitution’s email list, 85 students in Barnett’s classes and other faculty. Other students who were not part of that list used the link, which was circulated through social media, to enter the lottery for a seat at the event — the channel  regularly used by GULC to accommodate large audiences for high-profile events.

About five hours after receiving an email congratulating them for winning a place in the auditorium, however, 134 students were told that since they were not part of the event’s initial invitation list, they would not be allowed in Hart Auditorium, which seats 290 in the lower level according to GULC.

Student groups including the Black Law Students Association and Georgetown Law Students for Democratic Reform then wrote a press release announcing a protest against Sessions’ policies and the restricted nature of such a high-profile event.

“We, the disinvited, find it extraordinarily hypocritical that AG Sessions would lecture future attorneys about the importance of free speech on campus while actively excluding the wider student body,” the statement read.

Phillips, who co-authored the release, said students believed the list was carefully crafted to ensure a sympathetic audience, because it was limited to those who had an affiliation “either with this conservative center or this conservative professor.”

In the past, the Center for the Constitution has collaborated with conservative organizations such as the Federalist Society, the Fund for American Studies and the Heritage Foundation. In 2012, Barnett represented the National Federation of Independent Business in its constitutional challenge to former President Barack Obama’s health care law, the Affordable Care Act.

GULC spokesperson Tanya Weinberg wrote in an email to The Hoya that it is up to event organizers to determine audience selection and questions.

“What Professor Barnett chose to do was not atypical for high-profile speakers with limited time,” Weinberg wrote. “As was done for Justice [Ruth Bader] Ginsburg’s appearance, for instance, questions were solicited from students in advance and then the interviewer chose ones that were representative of the whole and pertinent to the event.”

Barnett explained that he limited questions to ones concerning free speech, but that there were so few that he had to write some of his own.

“My goal was to give the Attorney General the opportunity to make a public policy address on a topic — free speech on campus — that is at the core of the mission of the Georgetown Center for the Constitution,” Barnett wrote in an email to The Hoya.

An hour before the event, about 150 students and faculty members began to gather by the steps outside the venue. They posed the questions they had prepared for Sessions through a megaphone and later “took a knee,” a symbolic gesture made famous by NFL players during the national anthem at football games as an act of protest against police brutality and racial inequality.

The gesture was criticized by Sessions, who said freedom of speech should not come at the expense of respect for national symbols.

“It is a big mistake to protest in that fashion,” Sessions said. “These players, with all the assets that they have, can express their political views other than, in fact, denigrating the symbols of our nation — our nation that provides the freedom to speak and act.”

After Sessions finished his initial remarks, 10 students who were wearing #BlackLivesMatter shirts inside the auditorium stood up and placed tape over their mouths to silently protest the rest of the event.

Sessions also had a message on free speech for the protesters who were chanting outside the room.

“We will defend your views and the right to express them in appropriate and effective ways,” Sessions said. “I would urge you to understand and think about the very uniqueness of this right that we have.”

The conversation on Sessions’ appearance and free speech is slated to continue this afternoon at 2 p.m., when GULC Dean William Treanor is set to host a communitywide town hall.

“It is part of the mission of a great academic institution that we are able to express our views and engage in a civil debate,” Weinberg wrote. “For that reason, it is important that we come together as a community to talk about these issues.”

Imani Waweru (LAW ’18), the attorney general and spokesperson for the Black Law Students Association, said Sessions’ views were not received by the right individuals and highlighted the contrast between the theory taught and the practice of the law at GULC.

“I wish that a wider community could hear what we had to say, but I guess we didn’t have that luxury,” Waweru said. “When we are in an environment where we are taught about these principles, it only makes sense that we are given the opportunity to express these principles.”