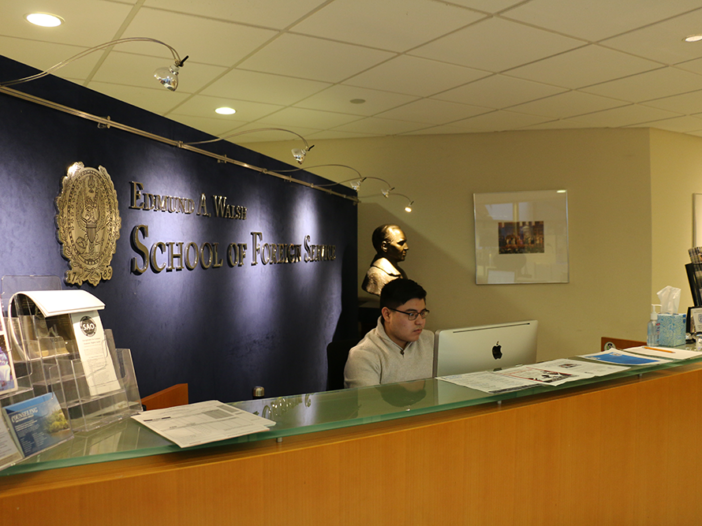 The School of Foreign Service announced Jan. 17 that a degree from the school will no longer require a minimum number of courses, making the SFS the last of the four schools to remove the course minimum requirement.

Previously, undergraduate students pursuing an SFS degree needed to take at least 38 three-credit courses in order to earn the degree. Students must still complete 120 credits, including core requirements and major requirements. However, the course minimum has been removed, Associate Dean and Director of the SFS Undergraduate Program Mitch Kaneda announced in a Jan. 17 email to SFS students.

The SFS’s decision comes after the Georgetown College and the McDonough School of Business announced in April 2019 that they were removing the minimum number of courses. The School of Nursing and Health Studies does not have a course minimum requirement.

The university-wide shift towards eliminating course requirements will give students greater agency over their education, according to SFS Vice Dean Daniel Byman.

“Georgetown as a whole is embracing classes that involve a range of credits,” Byman wrote in an email to The Hoya. “Under the new system, students will be better able to take advantage of classes with different levels of credit.”

This change marks the second time the SFS degree requirements have shifted in the last two years. In March of 2018, the SFS announced significant changes to its core curriculum, including a decrease in the course minimum requirement from 40 to 38. The changes also included revising the degree program to reduce the number of required major courses and economics courses while introducing a new mandatory science course.

First- and second-year students enrolled in the revised BSFS degree program will no longer have a minimum course requirement following the announcement. The change will have no effect on third- and fourth-year students, who still must take 38 courses in order to graduate, according to a separate Jan. 17 email Kaneda sent to students clarifying the change.

Last semester, the SFS Academic Council worked with the Dean’s Office to bring forward the resolution eliminating the course minimum to the SFS Curriculum Committee, which studies and recommends revisions of the school curriculum, according to SFS Academic Council President Forrest Gertin (SFS ’20).

The proposal was then passed by the SFS Executive Council, the governing body of the SFS comprised of students, faculty and deans, according to Kaneda’s email.

The removal of the course minimum requirement will allow students more flexibility when creating their schedules, according to Gertin.

“This means that students currently enrolled in the BSFS revised curriculum (students with a science requirement) can take one-credit courses to fulfill their 120-credit graduation requirement,” Gertin wrote in an email to The Hoya. “Plus, taking lab sciences or intensive languages worth more than three credits will now bring you closer to graduation.”

The SFS degree requirement change takes into account students who are enrolled in intensive language courses to satisfy the school’s modern language proficiency requirement, according to Grace Shevchenko (SFS ’22), who took three semesters of intensive French.

“I think by getting rid of the course minimum requirement it makes graduation requirements a lot more simplified and properly recognizes the differences between three and six-credit classes,” Shevchenko wrote in an email to The Hoya.

The change will benefit students who could have easily met the credit requirement, but would have needed to enroll in more courses to meet the course requirement, according to SFS Academic Council Junior Representative Siddharth Muchhal (SFS ’21).

“It definitely helps students whose schedule includes more four and five-credit classes, as well as those who want to take one-credit classes, in order to meet their graduation requirement in a more flexible manner,” Muchhal wrote in a statement to The Hoya.

The removal of the course minimum will not diminish the integrity of an SFS degree, according to Kaneda.

“Several considerations inspired this amendment to the degree,” Kaneda wrote in his Jan. 17 email. “We expect the change to make life easier on all students, without compromising the strength, breadth, and depth of the BSFS degree.”